Before seeing Don’t Think Twice, the new film by Mike Birbiglia, it’s hard to imagine improv comedy could ever be considered a metaphor for life. After seeing the film, though, it becomes clear that improv comedy is not only a pretty uncanny metaphor, it is an extension of the human experience. Really, what is life but the scariest and longest improv sketch ever?

The film concerns itself with an improv group that faces the challenges of an expiring theater lease and one of their own getting an offer with a Saturday Night Live-esque program. This obviously leads to drama, conflict and pain, but it also leads to hilarity. That’s really the first lesson of the film, that tragedy and hilarity are not distant emotions, they are nearly the same thing. Within the same few moments something can be both oppressively sad and wildly hilarious. Life is not clean, it is frenetic and unpredictable.

The second lesson of Don’t Think Twice is in the formation of our family and friends. The improv group of the film begins each show with the tradition of telling each other that, “I got your back”. This mantra quickly becomes a major theme in the film. With the challenges and conflict that build within the group, this “I got your back” statement becomes especially prescient. While in certain moments they slip in their promise to have the back of their peers, by the end that promise is held and revered in the sweetest imaginable ways.

At the danger of sounding trite, the third lesson of the film is Don’t Think Twice. A major tenant of improv is to not overthink, to react and say yes. This philosophy also applies to the lives of the characters in the film. They all have decisions to make, and the trouble arises when they toil over those decision and fail to follow their heart. Much like improv, life can come to a grinding and chaotic halt if we worry about decisions and analyze our woes for too long.

So while the film is about an improv company, it is really about life. We all go out on stage everyday, the stage usually being a cubicle or an office, and we interact with our family and friends with no script. What this film does so touchingly and hilariously is to point out that the rules of improv also apply to life. If we manage to approach life as a community, as a team that thrives on support, trust, and love, we will all be just fine. 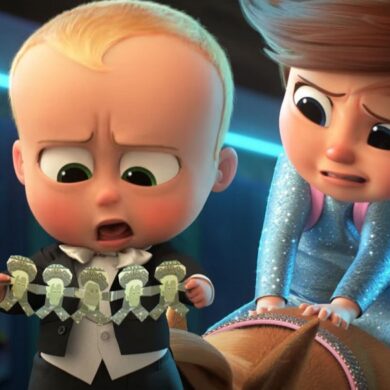 Because Anything Can Get A Sequel These Days, Here’s ‘The Boss Baby: Family Business’ Trailer