After an explosive Game of Thrones episode last week that left the internet buzzing this week had a lot to live up to. While it didn’t provide an army getting burnt to a crisp we did see the aftermath of the battle. It was devastating to say the least with some unexpected (or maybe expected) survivors  leading the headlines in the opening minutes.

The dragons didn’t leave a path of destruction this week it did take out two major leaders and turned them into a pile of ash. Thus effectively taking out the leadership of two houses. Dany gave them a choice and they paid the ultimate price. When will people learn to bend their God damn knee!?

We also saw some old friends re-uinite and immediately get put back into the friend zone.

We saw Jon Snow make a significant new friend and for a good reason. It has been long hinted at and rumored that Snow is actually half Targaryen and it was passively addressed in this episode. We will soon see Jon and Daenerys ride into battle on a pair of dragons? Time will tel, but if they do it will be glorious!

Did you know the Citadel has 15,782 steps, and hey, it says here that Jon Snow’s parents were married! No big deal. It just gives him a legit claim to the Iron Throne that’s all. So not only did Jon make some new friends but he also may have a new title in his future.

As if that all wasn’t enough lets get to the piece of information you may not have caught unless you hit pause during last nights episode. 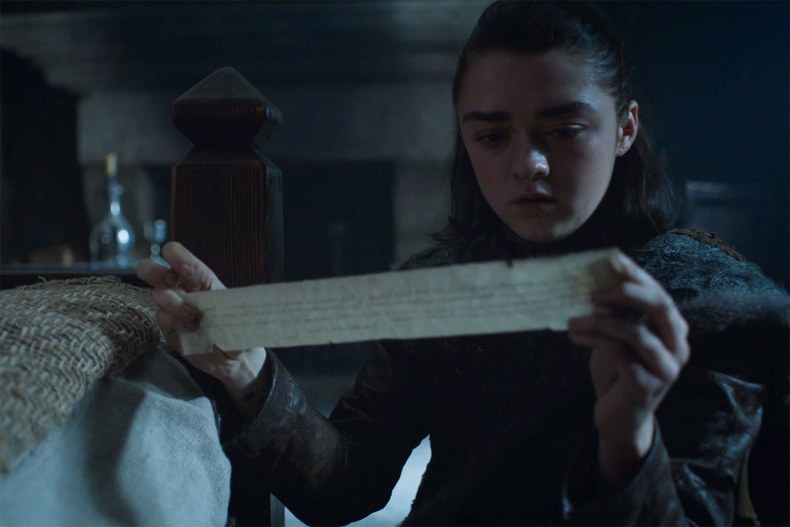 What was written in that letter Littlefinger wanted Arya to find?

“I write to you today with heavy heart, our good King Robert is dead, killed from wounds he took in a boar hunt. Father has been charged with treason. He conspired with Robert’s brother Stannis against my beloved Joffrey and tried to steal his throne. The Lannisters are treating me well, and providing me with every comfort. I beg you to come to King’s Landing and swear fealty to King Joffrey and prevent any troubles between the great houses of Stark and Lannister.

Right after Arya found the letter you can see Littlefinger twirling his filthy mustache in the in the background as he continues to scheme. While Arya may be an amazing fighter it looks like she has a thing or two to learn about the politics of the many kingdoms.

Here are some questions to ponder as we move through this season:

Is Gendry here to stay and how many faces will he crush with his hammer?

Has Daenerys become mad and will Jon ride off into the fiery sunset with her on a dragon?