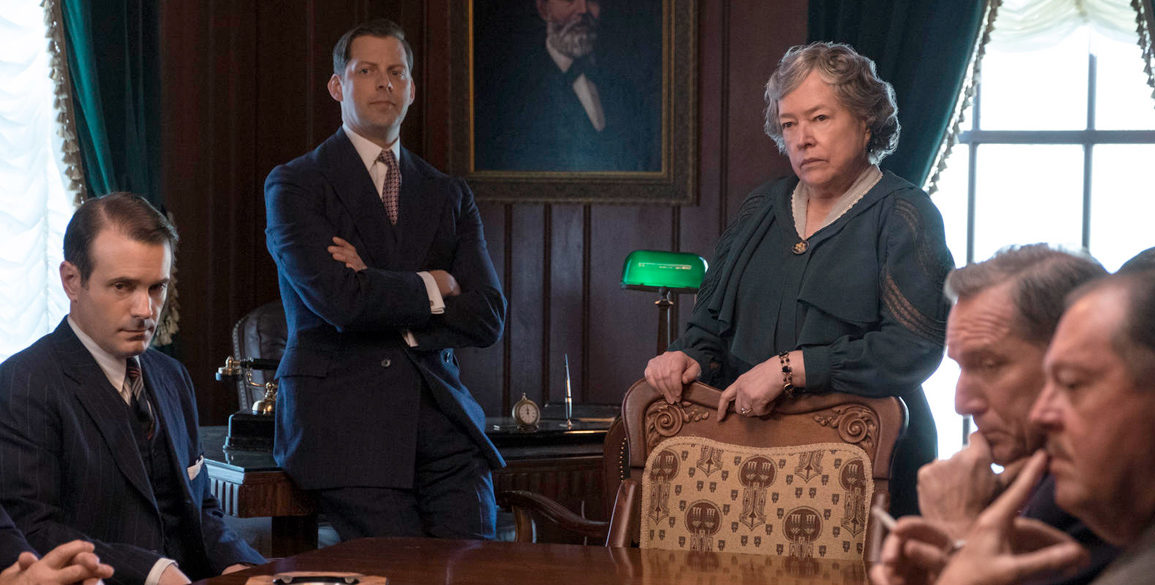 Netflix released the trailer and new stills for their crime drama, ‘The Highwaymen’ that boast a great cast!

It is based on true events, ‘The Highwaymen’ is the story of Texas Rangers Frank Hamer
(KEVIN COSTNER) and Maney Gault (WOODY HARRELSON) who are drawn out of retirement in a lastditch effort to hunt down Bonnie and Clyde. As the bodies of lawmen continue to pile up, Lee Simmons (JOHN CARROLL LYNCH), head of the Texas Prison System, convinces Governor Ma Ferguson (KATHY BATES) to put the storied lawmen on the case tracking the elusive fugitives. Despite skepticism from state and federal agents for their oldtime, frontier methods, the pair eventually brought an end to the bloody spree that gripped the nation.

“John knew all about Frank Hamer, a famous and revered lawman in Texas, and he wanted to do an honest, truthful story about this legendary man,” recalls Silver of the pitch. “He spent time with Frank Hamer Jr. for material to write the script, and I remember him telling me about their bourbon and steak lunch, as the son recounted his father’s wellearned mythology. THE HIGHWAYMEN breaks with the traditional ode to Bonnie and Clyde and is inspired by the extraordinary lives of Hamer
and Gault.”

“I’ve always been fascinated with American history, particularly what’s under the veneer of myth and folklore,” admits Fusco, who has a penchant for the American West. He grew up studying historic photos of outlaws, gangsters, and itinerant bluesmen, trying to penetrate the romanticized legends built around those characters. This same curiosity was sparked by the glamour shots of Bonnie and Clyde posing with shotguns on the hood of a stolen car. “I dug into the research and found that not only are they reported to have killed 13 people during their reign of terror, but the true hero was a retired Texas Ranger who was friends with Pancho Villa, hailed from the rough and wild days of the West, and patrolled border towns on horseback with a Winchester – a man named Frank Hamer.”

“Sometimes people are built for a job, even if they think that they want to be something else,” begins Costner, who read several books and news accounts on Frank Hamer to prepare forhis role. “He was an outdoorsman for sure, going off by himself, sometimes two or three week at a time as a young man in Texas, and just somehow able to commune out there and survive inthe wild. That rolled into him being kind of a physical guy who wasn’t against fistfights; and through his natural leadership he became a very legendary life in the state of Texas.”

A Texas Ranger Captain widely hailed as one of the most fearless men in the West, Hamer is a towering figure in American history who began his Ranger career on horseback. In 1905, after capturing a horse thief while working on Carr Ranch in west Texas, the local sheriff recommended he join the Rangers. Hamer’s measures were extreme but necessary to bring order to lawless oil boomtowns in the 1920s or go up against the KKK. By nearly 50 years old Hamer had known both ends of a gun, having himself been shot over a dozen times and reportedly left for dead on a few occasions. Credited with having killed between 40 and 70 people, Hamer is a Texas Ranger Hall of Fame inductee and three of his brothers were also Texas Rangers.

“Texas Rangers had been disbanded because their way of doing things, like anything in life sometimes, had fallen out of favor,” continues Costner. “Frank was hired and fired multiple times by sitting governors, but politics ran pretty hot in Texas, not unlike other places. The outlaws had bigger engines and superior firepower, which created mayhem for local law enforcement, who struggled to bring Bonnie and Clyde to task. What they really needed was an old fashioned manhunter, somebody who was dogged and not answering to anybody but his own instincts.”

“What an incredible script, it just captures that time and place, and no one had thought to do Bonnie and Clyde’s story from the perspective of the lawmen,” marvels Harrelson, reflecting on his first read through the screenplay. While there wasn’t much historical research available on his character, Harrelson was amused by a story about a small town that once requested the Texas Rangers’ services.

“Some guy came into this town and was just terrorizing people, and the Texas Rangers sent one guy, Maney Gault, to deal with this whole group,” he explains, which reflects the agency’s well known motto: One Riot One Ranger. The culprit was inside a barn so, after clearing it of civilians, “you hear all this crashing and everything, and then Maney comes out holding that guy by the back of the shirt, just kicking him in the ass all the way down the street!”

An umbrella pops open to protect TEXAS GOVERNOR MA FERGUSON (Bates) from a steady rain, as she makes her way from an official car to the grand front door of the Governor’s Mansion. Undaunted, she presses through a crowd of reporters shouting questions about Bonnie and Clyde’s brazen prison break. Asked if the unstoppable duo are heroes for striking back at banks, she turns on her heels and reminds them all that Robin Hood never shot a gas station attendant pointblank in the head for four dollars and a tank of gas! “We will capture Clyde Barrow and his paramour write that down and underline it twice,” Ferguson declares, to scribbles and popping camera flashes.

Without pausing, Ma’s coat is removed by a valet in the foyer, a secretary hands her a newspaper and envelopes, and she takes her place at the head of a long table hemmed by state officials in plain suits. She tosses The Austin American on the table and it glides to a stop in front of Lee Simmons, (Lynch) head of the Texas Prisons System. The headline screams details of the first ever escape from one of her prisons, and she has two questions: how did it happen and when they will be stopped!

Miriam A. “Ma” Ferguson was the first female governor of Texas, elected for two
nonconsecutive terms: 1925 and 1933. Tough and decisive, but dogged by rumors of corruption, “Ferguson was a forwardthinking, very strong woman trying to do things progressively for her community,” begins Bates. “At a time when all these guys like Pretty Boy Floyd and Clyde Barrow were using submachine guns and V8 motor vehicles, she’s really feeling that you can’t go fight these guys on horseback anymore. Ma Ferguson felt tremendous pressure because here it is in the middle of the Depression and she had to raise taxes to pay fo rher Ferguson’s Agents,” the new hightech law enforcement agency she set up to replace the Texas Rangers.

“The film begins with a bloody prison escape that’s engineered by Clyde Barrow and Bonnie, and this is the beginning of the end for them really,” suggests Bates, who was gripped by the script’s rich history and the clash of old and new criminal forensics. “Marshall Lee Simmons, who promised a guard that died in the raid he would bring the killers to justice, comes to the governor and insists they rehire Texas Rangers Hamer and Gault put them on the road, and do it the Texas way. They needed real trackers because the system they’ve got so far with the police and the motorcycle cops, and even Ma Ferguson’s new agents, is not doing the trick. She was backed into a corner Ma had to do something.”

On the road for about two years, the Barrow gang cut a swath of robberies and murders from Iowa to Texas. “The feds had about a thousand of men all over the Midwest trying to catch them. And the Texas government had their own security agents, as well as local and county police departments trying to capture them, yet they just continued to elude them.” The couple had taken on almost celebrity status after photos of Bonnie and Clyde were published in newspapers across America in March 1933. The playful and provocative images, taken by Clyde’s sisterinlaw Blanche, had been collected as evidence from a hastily abandoned hideout in Joplin, Missouri. “People had lost such faith in the institutions of government because of the Depression that they didn’t really trust anybody who worked for the government,” continues Lynch. “Bonnie and Clyde played on that with the people that they met, and they became kind of a cult of personality. They were so scandalously violent that they were captivating figures for the people of the time.”

To Lynch, the people chasing Bonnie and Clyde were equally captivating – he was fascinated by what he learned about Hamer and Gault: “Frank had an impeccable, dogged reputation for getting his man, so much so that he had been wounded literally a dozen times or more in the pursuit of various outlaws while he was a Texas Ranger. He was a fairly welltodo man when Lee approached him; he had no reason to take the job, but there was a sense of right and wrong about Frank that seemed pretty clear. He was a blackandwhite person in terms of how he saw things.”

“While Maney, as effective as he is as a Ranger, he’s the one who is haunted by the methods that they use,” suggests Lynch. “They’re not out there making a lot of money doing this work, which is not pleasant work. There is a calling that they’re following, and the movie explores what that calling costs them; that ageold question of what we’re willing to become to enforce the laws that we have on the books. John Lee’s movies have a beautiful humanity and explore themes that are really challenging to an audience in an emotional way. THE HIGHWAYMEN is a movie about people who are going to enact justice at all costs, and we’re grateful for them and scared of them at the same time, and for good reason.”

Check out the new trailer below. ‘The Highwaymen’  premieres on Netflix March 29 with exclusive theatrical engagements beginning March 15th. It will also have a World Premiere at SXSW 2019.