The time has come to turn over the calendar and drudge through another hellish year on earth where technology is bound to ruin our lives and kill us all. But until A.I takes over why not enjoy the things technology gives us like Netflix Original series. Specifically a new season ‘Black Mirror.’ Pegged by myself and my wife as one most uncomfortable series to watch. Blending parts Twilight Zone with current events and issues ‘Black Mirror’ will make sure to end your 2017 with a bang.

Check out the latest trailer below then stream all six episodes right now on Netflix.

At 74 minutes, this near-feature length episode featuring Breaking Bad’s Jesse Plemons (yes, Meth Damon) and takes some inspiration from the breakout episode of season three, San Junipero. Not in terms of its Star Trek-style costumes, of course, but how the idea was conceived by Brooker and co-writer William Bridges (who co-penned season three’s Shut Up and Dance).

“Certainly San Junipero influenced us here,” Charlie Brooker said. “Like San Junipero, [USS Callister] was a conscious decision to expand what the show was and then upend it.”

“We were pleased with how [San Junipero] had come out, it gave us the confidence to play with the tone more than we have before. We were sort of saying, ‘What haven’t we done yet?’. We did the 1980s [in San Junipero] when we didn’t think we could do that, so then we thought, ‘Can we do space?’”

He added: “Callister is very dark in places and it’s got moments of comedy that you maybe wouldn’t have expected a few years ago from Black Mirror.”

Hang the DJ is basically a bad Tinder date waiting to happen.

“The elevator pitch for this episode is it’s a Spotify for relationships,” said Brooker. “If you can imagine a service that gives you a playlist of all the relationships you’re going to have in your life. It takes the guesswork out of the romance. It’s quite a playful episode, really.”

“It’s just 38 minutes long and it’s deliberately a pared back story. It’s a short technological nightmare playing out against… I don’t want to say against the clock, but it’s very quick and primal,” explained Brooker. “It’s not the sort of story that we tend to do. We tend to be more about a human dilemma.”

“Memories can be subjective”

‘Arkangel’ was directed by Jodie Foster. The trailer suggest a case of overp parrenting with the quote “The key to good parenting is control.”

Jones explained that this mother/daughter relationship would be told over several years as the child grew up – and that’s the reason why director Jodie Foster was asked to join the project.

“We thought of Jodie from the outset. Of all the people who understand privacy and being in the spotlight, she would.”

Foster did more than simply direct the episode. Although Brooker didn’t reveal exact details, he said the Silence of The Lambs star “had so many good thoughts and suggestions of what might happen” that she slightly altered the events in the episode.

This episode features Rolo Haynes Black Museum. Playing out like a side show at a carnival but with an intricate display of true crime artifacts. It also drops several references to an episode from season two titled ‘White Bear.’ Perhaps a continuing narrative in the Black Mirror universe? Time will tell. 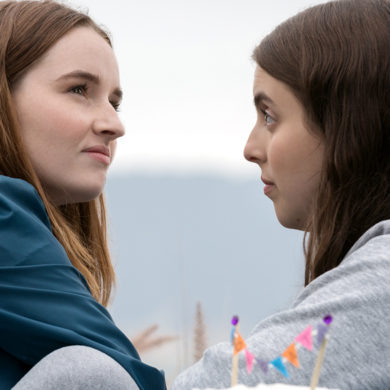