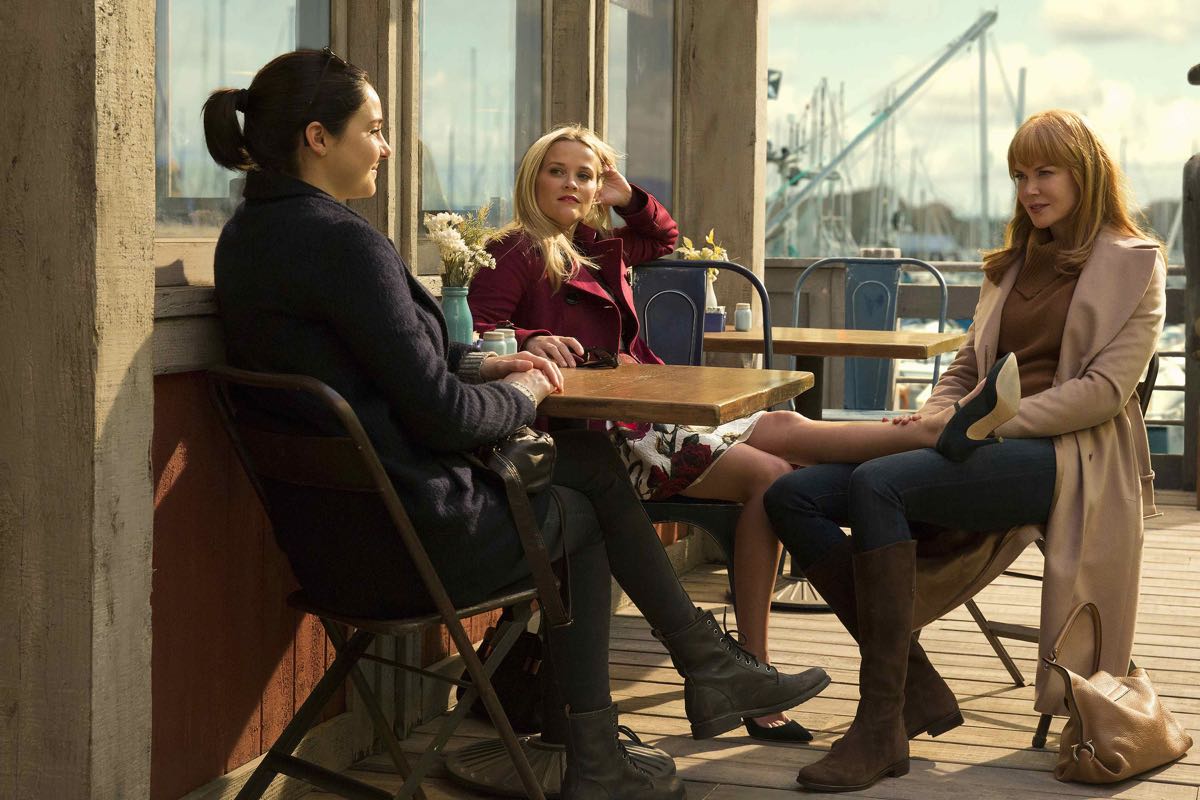 This week we get a pretty big reveal episode for Jane (Shailene Woodley) we find out why she won’t tell her son Ziggy who his father is and what really happened. I felt like the story telling in the flashback was really powerful. In the last couple of episodes we have seen short clips of Jane running down the beach, a man’s foot prints and her looking very beat up. We now know why. It sheds light on possibly why she moved to Monterey, CA to begin with and why she finds it necessary to keep a gun under her pillow. It’s clear that the trauma is still very real no matter what she says. After confiding in Madeline (Reese Witherspoon), it seems like shimmy be able to relax a little bit. I have a feeling Madeline might get too involved in this though and she should probably just leave it alone. But we all know she won’t

Celeste (Nicole Kidman) and Perry (Alexander Skarsgard) are still at each other’s throats, literally. The therapy session was interesting. Perry basically spilled lots of details about his abuse towards Celeste, as where she almost felt too embarrassed to reveal much of anything.  She probably doesn’t want to feel judged for staying in a relationship that is abusive, but she is pretty strong and I don’t think she should be underestimated. It was surprising to hear her actually say that she would leave him.  Perry may feel like he is redeeming himself by being so forth coming. But let’s be honest as hot as Alexander Skarsgard is, Perry is a huge dick!

Madeline is struggling with the fact that her oldest daughter wants to live with her dad. She deals with it that way she deals with everything, at a level 10. Although at the time of being told she couldn’t act too crazy since a teacher from school was present. I love Madeline’s husband, Ed (Adam Scott). He recognizes her shortcomings and fights right along next to her, while ever so carefully trying to make her self aware. In episode two there was a really awkward encounter between Ed and Madeline’s ex-husband, Nathan (James Tupper). After it was all said and done both accused the other of threatening the other and it was all really weird and childish. I’m still not sure what Madeline’s ex-husband is doing by always insisting that Ed wants to fight him. But I can only imagine that it plays into the ultimate plot of who is actually dead.

Renata had her daughter’s birthday party. She purposely didn’t invite Ziggy because of the mishap at school and Madeline took it personally. She kept her daughter and 6 others from going to the party which of course pissed off Renata. I will give her credit. She did try to make things right by inviting Ziggy after finding out a few kids weren’t coming. But it seemed like an empty truce. It’s sad that the kids are being punished because of this dumb feud, but we all know this happens in the real word too.
We just have a few episodes left and I can’t wait to dive into this show more. I want to know who died, who did it and how it was done. Do any of you who haven’t read the book have any theories? I want to know what you all are thinking!

Welp Pete is being forced to truly move on in this episode. His soon to be ex-wife is selling all of there stuff to move to Florida and Pete can’t handle it. T.J. Miller is kind of brilliant in his episode. He is the comic that just can’t “turn it off” he feeds off of his audience. He is also a good friend to Pete and offers to help him go pick up his belongings. The one thing T.J. brings up a lot in this episode is how important comedians are. And he has a point. He tells Pete’s wife, Jess (Lauren Lapkus) that what they do is important. They keep people from thinking about their shitty lives, if even for a few minutes. “People like Pete who are going through shit times.” There is a lot of truth to that.

Pete can’t let go of his stuff. He eventually says that he doesn’t give a shit about the stuff but it’s more about not making things final. This show is brilliant, Pete’s story is such a sad one but you can’t help but laugh out loud as it unfolds. He’s forced to go on a hunt for his notebooks that were accidentally sold with Jess’ new boyfriend, Leif (George Basil). God this guy sucks. He is so nice and it’s frustrating. You can feel the frustration Pete feels. It’s really hard to hate someone who is constantly saying and doing nice things for you, even if you did catch him sleeping with your wife.

In the end there is some resolve. Pete realizes that Jess just isn’t in love with him anymore and that he would never give up his comedy for her. They have grown in different directions and it is time to move on. Hopefully in the future episodes we will get to see Pete really dive into making his comedy act better. That tv idea of his about “Am I a real masseuse?” was terrible. I have a feeling that the rest of the comedians he meets along the way are going to crush him “to make him better”.

We get another huge reveal this week and bombshell on Girls. Hannah is pregnant! And in true Hannah fashion, she had to find out in the most awkward and embarrassing way possible. I will say that I was surprised to see this show go in this direction. Only one other time has Girls really tackled pregnancy. In the first season when Jemma thinks she is pregnant and schedules an abortion and then never bothers to show up. We later find out that she wasn’t pregnant after all, while trying to bang a random in a bar bathroom, so problem solved. Other than that this topic hasn’t really been explored. It’s really weird to think about Hannah having a kid and raising it since she can’t really  figure out her own life these days.

One thing that is still consistent, Marnie is still selfish as ever. It’s kind of funny that the running joke of the show has been how selfish Hannah is. This is very true about her and all of the characters on the show, but Marnie… in my opinion is probably the worst. I can’t stand her character. Who’s with me? I mean I have known girls like her that probably truly feel like they care about people but want to constantly make it about themselves. It’s so exhausting. Ray finally realizes that he is not going to get what he really wants in life while being with Marnie. By the way, can we discuss why he was even into her to begin with? I always thought it was a strange pairing. I get that he thinks she is hot, but Ray always seemed like the kind of guy that needed more. I think he finally starts to realize that his life needs to have more meaning and we see a turning point for him.

I kept telling myself that I liked Jemma and Adam together, but I don’t know if I really believed it. They seem so right for each other, yet they feel like a dumpster fire waiting to happen. Adam quits the film he is working on in a very Adam way, pissed off. Jemma convinces him to make his own film. It’s apparent that she really wants to be his creative muse. It is surprising that these two haven’t killed each other yet. Jemma comes up with the brilliant idea about making a film about the fucked up triangle between her, Adam and Hannah. Jemma thinks it could serve as some sort of therapy as well and somehow convinces Adam that this is a great idea.

At the end of the episode something about Hannah really sticks out. This is a girl who takes every opportunity to make everything about herself, now she has a real life “Holy shit!’ moment happen to her and she stays quiet. She comes home to her apartment where Adam and Jemma are waiting for her to ask her for her blessing on the film. She basically dismisses everything they are saying and says, “ You guys should do whatever you want.” As she walks passed them, clearly emotionally drained. When she gets to her apartment she doesn’t tell Elijah either. She just lays down in his lap. It’s almost as if now Hannah really has something to be scared and worried about and doesn’t know how to deal with it so she is shutting down. This event in her life may have changed her. But we will see in the future episodes to come. I can’t see her changing completely though. After all she is still Hannah.

Until next week….this has been your weekly HBO Fix!