Review: Glenn Close’s Performance in ‘The Wife’ is Better than the Movie

Timing is everything.  In the early 1980s, Glenn Close burst onto the big screen and received three consecutive Best Supporting Actress Academy Award nominations for The World According to Garp (1982), The Big Chill (1983), and The Natural (1984).  Unfortunately, these were particularly good years for Jessica Lange, Linda Hunt and Peggy Ashcroft; they won Oscars instead of Close.  In the late 1980s, she graduated to Best Actress nominations for Fatal Attraction (1987) and Dangerous Liaisons (1988).  It was then that she started keeping company with Meryl Streep, who had already won two Oscars: Best Supporting Actress for Kramer vs. Kramer (1979) and Best Actress for Sophie’s Choice (1983).  Streep was also nominated in 1987 (Ironweed) and 1988 (A Cry in the Dark), but both she and Close lost to Cher and Jodie Foster.  I’d like to think they perhaps split the votes, allowing someone else to win.

Finally, in 2012, Close faced Streep at the Oscars.  It was her performance in Albert Nobbs versus Streep’s performance in The Iron Lady. Streep won.  She had received eight nominations between 1988 and 2012; Close had received none.  I provide this history because I’ve always preferred Close over Streep.  For me, she’s always been more earthy… more natural.  Her performances are less mannered and showy.  However, I am not the Academy of Motion Picture Arts & Sciences, and I did not get to make Glenn Close an Oscar winner.  Please don’t take this as me disparaging Meryl Streep, but somehow along the way, she was the one who became an Academy darling.  Timing is everything.  Has Close’s time finally come?  Her latest movie, The Wife, opens this weekend.  Is it the showcase that will finally earn her the gold?

Well, she’s good (as usual) in her role, but I’m afraid the movie itself doesn’t quite provide the right spotlight for her.  She plays Joan Castleman, who travels to Stockholm with her husband, Joe (Jonathan Pryce), when he wins the Nobel Prize for Literature.  While there, she and her son, David (Max Irons), unpack their emotional baggage when uncovering secrets of the past.  By witnessing flashbacks to their youth, we learn how Joan came to be married to Joe.  By putting disparate pieces together, we learn their honeymoon was short lived and they don’t currently have the ideal marriage that the public perceives them to have.  The Wife is based on the 2003 novel of the same name, written by Meg Wolitzer.  Researching the author, the movie may in part be a bit autobiographical.  Young Joan attends Smith College (she’s a student of Joe’s); young Meg studied creative writing at Smith.  Their paths diverge, though, because Joan never pursued a career in writing.

She couldn’t because at the time (1958), women authors were not taken seriously, if they were even published.  That’s one thing that bothered me about the circumstances of The Wife.  I wasn’t convinced that a woman like Joan wouldn’t chase her dream, anyway.  In a scene during which she has a discussion with female author Elaine Mozell (Elizabeth McGovern), the latter discourages her from doing so.  She seems to take her advice to heart instead of moving forward anyway.  This isn’t that kind of movie, I guess.  It’s not about the underdog achieving fame and fortune against all odds.  It’s about the woman who supports her husband while he does it.  In this way, though, the screenplay by Jane Anderson seems thin.  There are many instances when events seem coincidental or pat.  It’s all structured for the big dramatic moments, which don’t feel completely earned.  Maybe there’s some nuance lost in translation by Swedish director Bjorn Runge.

Contradicting the shortfalls of the story, the fact that Close matches its style with her mostly quiet, subtle performance is perfectly appropriate.  You don’t really know what she’s thinking at any given time.  When she does react or respond dramatically, her emotions organically reveal themselves rather than explode unnaturally.  Still, by the end, she’s largely a woman of mystery.  I couldn’t quite reconcile her motivations with her actions.  I shouldn’t blame the movie for that, I guess.  It fine for it leave me wondering, rather than having all my questions answered.  Perhaps because I’m not an 80-year old woman who’s lived in the shadow of her husband her entire adult life, I don’t fully understand her.  Yeah, I certainly would have done things differently if I were her; but… I’m not.  Overall, she and the other characters feel like they’re in a stage play.  It’s not that the story is dull or the action is confined to a few locations; it’s that I can easily imagine the dialogue being spoken on stage without limiting the plot.

Glenn Close compensated for a lack of Oscars by taking home two Primetime Emmys and a Golden Globe for her role of Patty Hewes in FX television series, Damages.  (It’s terrific if you’ve never seen it!)  Could this possibly be the year she gets to place an Oscar on the shelf next to her other awards?  Well, considering Meryl Streep is appearing in only Mamma Mia! Here We Go Again and Mary Poppins Returns this year, I can’t imagine she’ll be competition.  There could be a technicality.  The Wife actually had its premiere at the Toronto International Film Festival in 2017; I don’t know if it’s even eligible this year.  Perhaps the best way to evaluate her performance in this movie is to compare it to last year’s nominees.  Does it beat Frances McDormand’s performance in Three Billboards Outside Ebbing, Missouri?  I’d say, “No.”  In fact, with the other nominees’ big, high profile roles, I’m not sure she would win over any of them (Sally Hawkins, Margot Robbie, Saoirse Ronan, and, yes, Meryl Streep.)  It’s definitely good, better than the vehicle that carries it; but, sadly, probably not award winning. 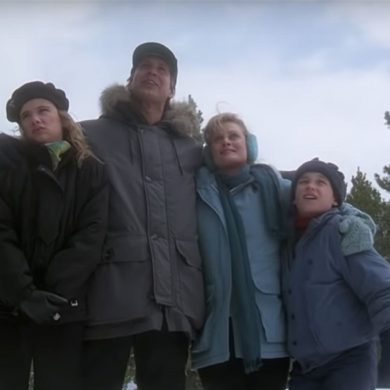