There’s nothing as salacious in Tab Hunter Confidential, the documentary which recently screened at SXSW, as its title might indicate. Instead, it’s a relatively innocent and straightforward biography of the former Hollywood sensation who lived his career in the closet. Instead of focusing on scandal or outing other celebrities with whom Hunter may have had affairs, it’s really a matter-of-fact account of what it was like to be a star in the 1950s-60s for someone who happened to be gay.

Throughout the movie, Hunter himself and a host of other celebrities, critics and film historians remind us how it was a different era back then. Even though the battle for marriage equality wages on today, I bet most people don’t realize that in the 1950s, it was illegal to be gay. Homosexuality was considered a mental illness. Before the credits even roll, an arrest at a gay party frames the narrative. We later learn that this “limp-wristed pajama party” will create a turning point for Hunter later in his career.

Not only was homosexuality not discussed, but Hunter states he would never have talked about his personal life in the 1950s, anyway. Born on July 11, 1931, as Art Gilean, Hunter’s childhood was not remarkable. However, it contained elements familiar to young men and women struggling with their sexuality. He was “lost, introverted and shy.” He felt different than the other boys. The word “gay” was not around; instead, a variety of derogatory terms were used, some even by Hunter himself.

Raised as a Catholic, Hunter loved going to church. In the movie, he states that he learned if something was uncomfortable for you, you pushed it from your mind. Consequently, he hated himself. After finally making confession, he fled the church, although he would much later in life find comfort from it again. Hunter grew up living at the movies because they provided total escapism. However, he never had a desire to be part of them.

That changed when he moved to Los Angeles to be near his brother. Working with horses, he met actor Dick Clayton, who suggested he give acting a try. He met with agent Henry Wilson, who immediately saw potential with his “youthful American masculinity” and helped him come up with a new name. His first movie (Island of Desire, 1952), though, was a critical flop that kept Hunter working in “grade Z movies.” Audiences seemed to love him, but, as he’ll be the first to admit, he was an awful actor.

It took a serious turn on stage in Our Town for Hunter to be noticed. Hunter says he learned that if you rely on your instincts and feelings, you can be a good actor. Jack Warner optioned him for Warner Brothers and he beat both James Dean and Paul Newman for a plum role in Battle Cry (1955). From there, he became Hollywood’s all-American sweetheart. In the mid-to late 50’s, he appeared in movies, TV shows and even recorded the hit single, “Young Love.” He really had it all.

The way Hunter describes Hollywood in the 50s is that publicity exceeded the product. He claims the movie magazines made him a star more than the movies did. Under the studio system, stars had to date and were rewarded for being something they weren’t. Therefore, photographs of Hunter out on the town with Natalie Wood or Debbie Reynolds were no indication of what was really happening in the celebrity’s personal life.

About the same time, Hunter was in his first significant relationship with another man, ice skater Ronnie Robertson. In 1950s Hollywood, though, the studios and press would protect the star as long as he didn’t destroy the image of him they created. There wasn’t even gossip about Hunter being gay… until he changed agents and Henry Wilson released to the publication Confidential that he had been arrested at the party described at the beginning of Tab Hunter Confidential.

I’m not going to recount Hunter’s complete career here; the movie does a more entertaining job of it than I can. Being a lifetime movie buff, I loved Tab Hunter Confidential, not so much because of the man, but because of the firsthand knowledge of old Hollywood that he shares. There’s so much I didn’t know and so much I appreciate learning by watching the movie. A few additional highlights for me include:

• Hunter was at the height of popularity during a time in America when there was the largest group of teenagers ever in its history, the Baby Boomers.
• The Confidential story about Hunter’s arrest supposedly took the place of a story that would have outed actor Rock Hudson.
• Hunter had a romantic relationship with another hot young actor, Anthony Perkins. It ended when Perkins essentially stole from him the lead role in Fear Strikes Out.
• One of Hunter’s attempted comebacks after he left the studio system was a cheap horror movie called Sweet Kill, the first movie from writer-director Curtis Hanson (The Hand That Rocks the Cradle, L.A. Confidential).

Although the music is a little cheesy, Tab Hunter Confidential cleverly uses animated cutouts and montages to recreate some of the milestones in the actor’s history. It’s never boring to watch. There is no narration; Hunter simply tells his story with additional anecdotes from people like John Water, George Takei, Debbie Reynolds, Noah Wylie, Portia de Rossi and Clint Eastwood. I appreciate most Hunter’s participation in the project and that the movie was not created posthumously.

At 84 years old, Tab Hunter is still a handsome man. But it’s the photos and clips of him at the height of his career that indicate what a sensation he must have been. Blonde and blue-eyed, often shirtless, he was a dream for screaming teenage girls (and sexually confused teenage boys). The movie demonstrates that Hunter has a happy ending. The lesson I take from it is his final statement, “A lot of people have feelings in conflict with themselves. I think you have to be true to yourself.”

Tab Hunter Confidential is based on the book of the same name by Hunter and Eddie Muller. It is directed by Jeffrey Schwarz. 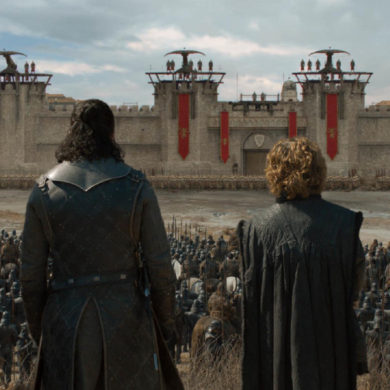