As technology evolves, fashions change, icebergs erode and social media changes the way we interact with one another, there’s still a couple questions that remain unchanged. Chiefly among them: “can men and women simply just be friends?”. That building block of almost every rom-com ever made still stands largely unanswered (although truthfully the question could expanded more for inclusion in this modern age). C.A. Gabriel and Renee Felice Smith choose to mine this fertile ground in their feature debut, The Relationtrip. It’s a film that’s best described as essentially what would happen if Michel Gondry directed When Harry Met Sally… for millennials. Don’t let that last word dissuade you, as this sweet, honest and surreal film has a lot going for it.

Liam (Matt Bush) and Beck (Renee Felice Smith) are 20-something single loners, desperately fending off their friend’s calls to settle down and grow up. What passes as jobs for the 2 leads help cement that this isn’t a love story mired in the past. Liam spends his days making a living as a game streamer and Beck is a quirky barista at a hip coffee shop. Though fiercely independent, you can tell a loneliness is seeping underneath both of their facades. They’re certainly willing to fall into the shambles of love, just on their own terms, not those of everyone else .

Through happenstance they met at a mutual friend’s “Salon de Musique”, which finds Liam floundering (or flourishing) in the performance of a one man rap duo, after his friend abandons him. The two hit it off instantly over tacos and discuss their mutual anger of their friend’s not allowing them to just be by themselves. On a whim they decide to run away from the world, for a weekend in the desert. This won’t be some hinky getaway though, as some precautionary guidelines are put in place: two bedrooms, a pool, an espresso machine, no funny business, no pontificating about life or existentialism, and no sob stories. Even a nonthreatening name for the event is decided upon, a “friendship friend trip,” which Liam insists is a name he’s work shopping.

Once out of town, with the nearest other person miles away, Liam and Beck start to get close, sensing a kindred spirit in each other. While at first they play it cool, they eventually start to give into their baser instincts. It’s here The Relationtrip exposes a surreal underbelly and the movie truly begins to sing. Just like most people, our leads have skeletons in their closet, wrapped up insecurities that hold them back when confronted by the possibility of a new friend, crush or love. Liam struggles with thoughts of his ex-girlfriend, while also shielding the fact that he’s the epitome “momma’s boy”. Beck, on the other hand has body issues on par with Tobias Funke. She also harbors a more destructive side, which manifests in the form of her childhood imaginary friend, Chippy.

Chippy comes to life in the form of a scraggly blue Muppet, created and performed by Spencer Lott. When he’s around Beck finds herself powerless, unwilling to keep her worst tendencies at bay, a charred safety blanket in a jean vest.

As the weekend wears on, every aspect of a basic relationship is on stark display. From the honeymoon period, where everything is shiny and new, to the days where being a slave to routine threatens to rob nary a hint of romance. In the hands of Smith & Gabriel, The Relationtrip is a sweetly honest look at modern day romance, where everything seems to move faster than it needs to. Sure, predictability peeks its head into the proceedings occasionally, but the heart, energy and surreal flights of fancy that are peppered throughout more than make up for any minor missteps. What’s more is that it speaks to the power of a carefully, lovingly made PB&J sandwich. Something that binds polar opposites together to make something simple, delicious and universal, much like the movie itself. 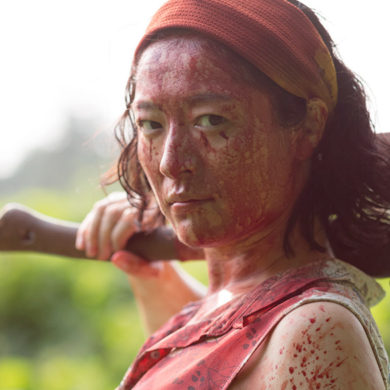