Between the end of World War II and the mid-1980s, George “Scotty” Bowers was a Hollywood pimp, although in the new documentary, Scotty & the Secret History of Hollywood, he claims that the service he arranged for the motion picture industry’s elite players was not prostitution.  “I never took a dime from anyone.”  Instead, he helped closeted gays, lesbians and bi-sexuals “lead authentic lives.”

When Joseph Breen began enforcing the Motion Picture Production Code (Hays Code) in 1934, movie star contracts incorporated morals clauses.  Bowers claimed it was all an effort to “sell the myth that movie stars were moral, law abiding citizens.”  He provided a service for those people restricted by the Code.  In the cultural environment of the time, it was more acceptable to be in an adulterous relationship than to be gay.

This is all part of a fascinating chapter in Hollywood history; however, in this particular documentary, I find the details far less interesting than I find the man himself.  I don’t want to hear what Charles Laughton liked to do sexually, and I don’t care for the coarse language with which Bowers describes it.  Fortunately, this salacious information is not the focus of the film.  It’s merely sprinkled throughout the movie to remind us of the services Bowers provided.

Unfortunately, Bowers himself remains somewhat of an enigma.  It’s not what he did in the heyday of his “career” that’s unclear.  Instead, it’s the 33 years since Rock Hudson’s death in 1985, when Bowers stopped providing services, that remains fuzzy.  From here to there seems like a big jump, especially since he’s currently a 95-year old man, with a mind like a steel trap, who lives in a house he purchased for $22,000 that looks like it belongs on Hoarders.

Bowers is married.  He met his wife at a piano bar where she was singing.  She hasn’t read his tell-all book, Full Service, because she’s not interested in “Hollywood shenanigans.”  He never told her about his “life before” and she doesn’t know him as “that person.”  I fear for her safety, though.  It’s dangerous for her to walk through the house with all his “goodies” stacked everywhere.  “I should call social services, but I just can’t.”

There’s also a hole in their deck where she left a rug and it rotted the wood.  After keeping actor Beach Dickerson’s ashes in the trunk of a car for five years, Bowers finally dumps them through this hole.  He supposedly asked them to be spread over the fence into the Hollywood hills, so I guess Bowers thought this was close enough.  Beach left him three houses in his will, each one we see filled with as many “goodies” as the last.

Scotty & the Secret History of Hollywood flips back and forth between events that no one seems to dispute, and a current state that’s sometimes perplexing.  Even though it’s less straightforward, I see the overall movie as a profile of the man.  In at least some fashion, what he did for over 40 years made him the man he is today.  The fact that his life hasn’t ended in a typically tragic way seems to imply that he’s not being punished for any wrongdoing.

We can learn a lot from Bowers, who has no regrets and stands proud of everything he’s done.  Defending his clientele, he says, “There’s no way you can ruin a life by —-ing a c—. The only way you can ruin a life is if you hit someone with a bus.”  And he takes personal responsibility for everything that happened in his life.  “Everything you do, you blame yourself. Anything else is bull—-.”  (There’s some of that coarse language… Scotty unfiltered.)

Scotty Bowers is a beloved Hollywood figure.  Over the years, he claims to have “created happiness for people to compensate for bad things.”  But he “can’t think back to any bad things at all,” getting sentimental only when he recalls his brother’s death during World War II.  Still a part of the gay community, one of the final images of the film is him walking down to West Hollywood during a celebration of the Supreme Court’s 2013 decision legalizing same-sex marriage in California.  I guess that tells us all we need to know after all. 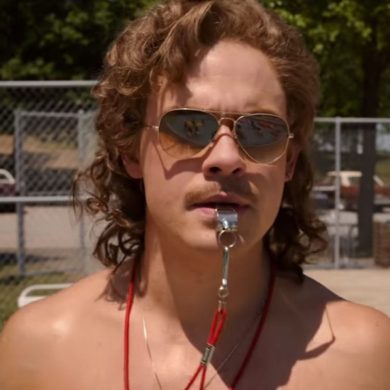