Review: ‘Watcher’ Is A Skillful Cat & Mouse Thriller With A Distinct Throwback Feel 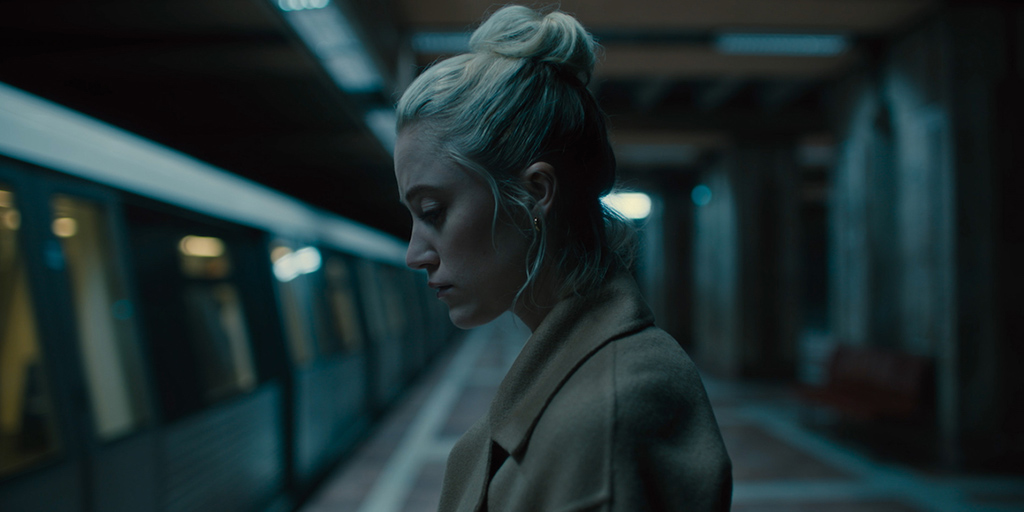 It may be relatively early in Maika Monroe’s acting career, but if the last decade has taught us anything she’s more than deserving of the title “indie scream queen”. Don’t mistake that as a put-down, as Monroe has proven time and time again that she’s a force to be reckoned with. Nowhere is that better on display than in Chloe Okuno’s paranoid thriller Watcher. A showcase not only for Monroe’s stellar range but the artistic eye that Okuno possesses.

After moving to Romania when her husband, Francis (Karl Glusman), is offered a new job, former actress Julia (Monroe) has trouble adjusting to her new surroundings. Not only is she thrust into a world where she doesn’t speak the language, but anxiety and stress keep her up at night. To pass the hours she stares out the flat’s numerous gigantic windows, peeking in on the various lives unfolding across the way. Save for one peculiar window, where she sees a fellow watcher (Burn Gorman), shrouded in darkness, staring back at her.

One night shortly after moving in, the couple comes across a crime scene in their neighborhood. It turns out there’s been a string of grisly murders of young women, perpetrated by a serial killer dubbed “The Spider”. After a series of unexpected run-ins with the watcher, Julia becomes convinced he’s the killer, despite no one taking her claims seriously. Even Francis is quicker to side with co-workers than rush to his wife’s defense. Determined to find the killer herself, Julia sets about unraveling the mystery, by putting herself directly in danger.

Aesthetically Watcher is top-notch, with a camera that captures everything in stunning widescreen. To the point where viewers actively feel like voyeurs themselves. Glancing at each corner of the frame. That and the sparse score give off a haunted quality to a film that floats along, flirting with sinister intent lurking around every turn.

The overall vibe is best described as Rear Window meets a Giallo film. Though it lacks the set pieces of the former and the bloodshed of the latter. It never commits to being any certain type of film, which may be off-putting to some, though will earn its “art house stripes” for others. Watcher, like Julia herself, drifts along, skirting between thriller and character study. Allowing itself to play by its own set of unique rules and casting a hypnotic spell in the process.

There are moments where Watcher comes off as languid when it seems as if something should be happening, but isn’t. Okuno invests more in mood than action, creating tense sequences, even through mild everyday occurrences. Helping fill it all come together Okuno and co-writer Zack Ford pepper invest in Julia as a fully developed character, allowing her to be clever and cunning when the moment strikes. While also investigating just how quick society can be to ignore the cries of a woman in danger. It all leads up to a spellbinding finale where the tension and blood get ratcheted up a few notches before delivering one gut punch (line) of an ending.

Review: ‘Watcher’ Is A Skillful Cat & Mouse Thriller With A Distinct Throwback Feel
80