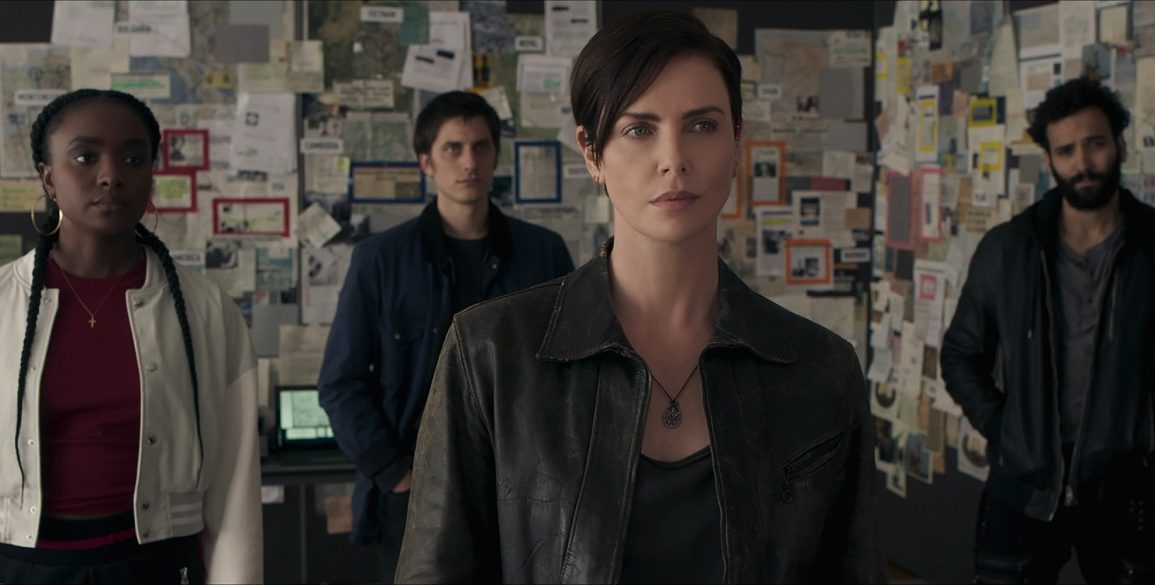 The “You’re probably wondering how I got here” trope is the perfect hook for a casual Netflix subscriber. With so many options available, quickly entering and exiting Netflix content is almost like channel surfing during the cable era. The algorithm wants to hook the viewer as quickly as possible. The Old Guard begins with a bullet-riddled Charlize Theron lying on a steel floor. Her character, Andy, directly addresses the audience as a narrator. She states “I’ve been here before, over and over again.”

The Old Guard isn’t just a story about death, it’s a story about dying over and over again. In relation to other introductory hooks on the platform, this one definitely works.

Netflix’s recent original release is an adaptation of the Image Comics graphic novel of the same name. The relatively unknown property is coincidentally center stage, in a time when the pandemic has delayed the release of every blockbuster from Marvel and DC. Director Gina Prince-Bythewood (Love & Basketball) might not have been given an Avengers-level budget, but casting a top tier action star can be more reliable than paying millions on CGI.

Five summers ago, Theron inhabited one of the most iconic characters of the previous decade in Furiosa, outshining Mad Max in his own movie. Three summers ago, she dominated another visceral action film with Atomic Blonde. By comparison, The Old Guard doesn’t have the same style and scope as the other two. Thankfully her presence looms just as large.

Andy is an immortal who commands three other immortals as they globe-trot and try to create positive change. They are essentially an underground team of superhumans, only known as legends from centuries past. Andy’s full name is “Andromache the Scythian”, a reference to Greek mythology. Creator and screenwriter Greg Rucka never reveals Andy’s real age, but it’s implied that she is at least a millennia-old. The rest of the team has joined Andy at separate points in history. Nicky (Luca Marinelli) and Joe (Marwan Kenzari) discovered their power during the Crusades. Booker (Matthis Schoenaerts) joined in 1812 after fighting with Napoleon.

Prince-Bythewood’s smooth command of the camera during these action sequences allows this team to display their teamwork. Nicky and Joe both carry swords as well as pistols, and Andy wields a badass double-edged axe. With a star like Theron who puts in the work, the film is able to show her hacking and slashing at a wide angle.

That first skirmish is an effective tone setter for the rest of the runtime. These immortals have obviously fought well together for centuries. They all can kill effectively, but Andy’s abilities are in their own stratosphere. It also gives an indication on how the violence will look. In action movies adapted from graphic novels, the blood splatter is a little wider and the wounds are a little more visible. The film’s limited effects budget is used on moments of instant healing, a power similar to Wolverine or Deadpool. The action really kicks off when the film arrives at the previously mentioned scene of the team annihilated with gunfire. The immortals quickly heal and the nameless assassins can’t reload fast enough.

Kiki Layne (If Beale Street Could Talk) plays Nile, a Marine stationed in a dangerous area of Afghanistan. An enemy slashes Nile’s throat in action and she miraculously survives, causing her comrades to see her as a freak. What Nile doesn’t realize at first is that she is also an immortal, and that her wound healed completely in a matter of minutes. This experience sends a telepathic signal to the other immortals, which prompts Andy to go on a recruiting trip.

The film quickly becomes more of a two-hander, as Nile’s youth challenges Andy’s nihilism. Hundreds of years have clouded Andy’s perspective on life. The film portrays immortality more like a curse instead of a power. The team realizes after the first battle that their recovery was recorded. This is the first real proof of their existence. Knowing that she will now be hunted, Andy discouragingly says, “The world isn’t getting any better, it’s getting worse.”

Harry Melling might not look exactly like Dudley from the Harry Potter films anymore, but he neatly fits in the role as Merrick, the hateable pharma bro who wants to capture the immortals. Melling’s campy quirks add an interesting dimension to the film. A villain just as stoic and serious as Andy would have been much less interesting. Merrick hires Chiwetel Ejiofor to assist with the captures. Ejiofor is an expert at playing conflicted men. Yet, like much of the cast, he isn’t given a chance to flex his acting muscles.

There isn’t much depth to any immortal other than Andy and Nile. Nicky and Joe have a passionate romance together, but only one scene gives them the screentime to display their personalities. It’s apparent that Rucka had trouble fleshing out backstory for the rest of the team.

Despite these drawbacks, Prince-Bythewood doesn’t allow the storytelling to suffer. The Old Guard is much more patient and mindful than a standard action film. Beats are dedicated to discussing the mental toll of taking a life, even if that life in question belonged to a “bad guy”. Superhero movies tend to drift into that black and white division of good versus evil. When Nile asks the team what side they lean on, Joe replies “Depends on the century.”

For years Andy has been pessimistic that she has caused any positive change in the world. During the runtime, her arc is somewhat similar to Jimmy Stewart in It’s a Wonderful Life. She realizes the indirect positive influence she has created and how her life has changed others. Extended scenes of exposition provide texture to the world, and there are little to no empty quips to cut tension. The film isn’t just another action showcase for Charlize Theron, it’s Gina Prince-Bythewood’s thoughtful take on the superhero genre.

Her most impressive accomplishment is that she doesn’t condescend to those who just want to watch entertaining action. The extremely kinetic hyper violence is similar to Atomic Blonde or a John Wick movie. Theron has several scenes to show off her expertise with fight choreography. There is one moment in particular, where a nearby explosion gives Theron a hero profile similar to an 80s movie starring Stallone or Schwarzanegger. A development in the story brings real stakes to the film as well. This forces the immortals to have a real reason to fight for their lives, as opposed to just fighting for the sake of fighting.

Right when The Old Guard looks like it will avoid the natural pitfalls of every other superhero movie, it becomes a little more like every other superhero movie. When there is an opportunity to tease something bigger and better, the film can’t help itself. The Old Guard introduces a villain who looms over the rest of the runtime, until the end teaser of course. This villain is objectively more interesting than Merrick, but she won’t take the spotlight unless there is a sequel, which may or may not happen. Netflix normally only gives sequels to teen rom-coms, but it would make sense if they are making an attempt to build a franchise.

The Old Guard takes the perspective of a distinctive filmmaker and successfully channels it through one of the premier Hollywood action stars of the modern era. A sequel might not come, but at this point Charlize Theron has proven that she can consistently provide quality summer entertainment. 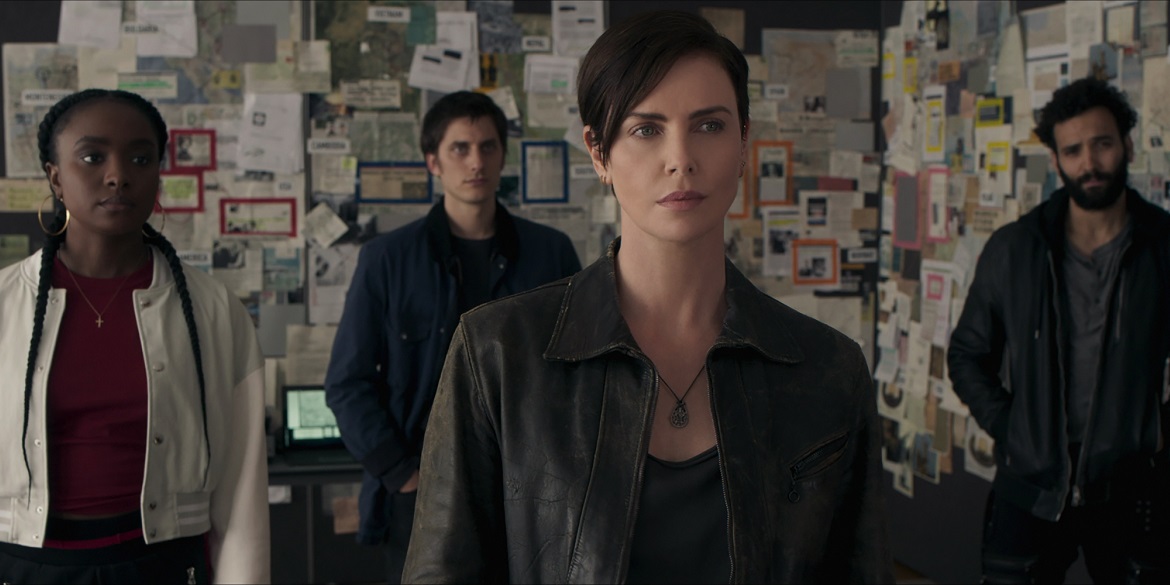