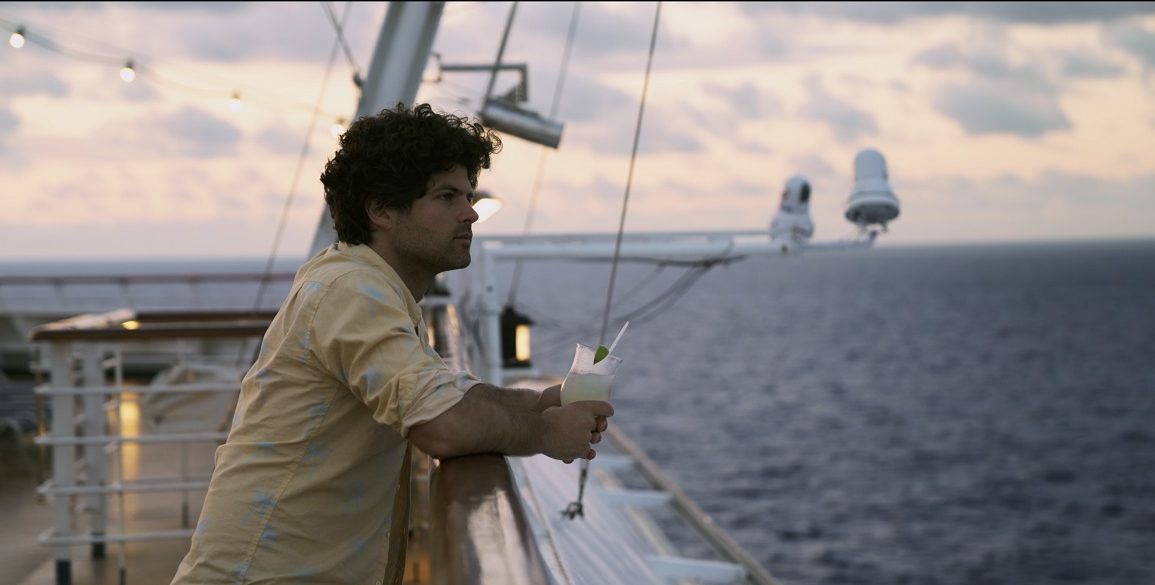 With the Terminator franchise still alive and well, time traveling assassin movies never go out of style. Same Boat, coming direct-to-VOD April 7, takes a more casual approach to the concept. The title refers to the cruise ship that the film takes place on. There is a unique energy in Same Boat that isn’t present in other cruise movies, the most important factor being that it was filmed secretly. When a character sings a goofy karaoke song, he is singing to real people, not extras. The other inescapable thought is wondering when anyone might take a cruise anywhere ever again.

The film introduces James (Chris Roberti) and Mot (Julia Schonberg), two assassins flashing back to take out the originator of reality TV. Their process is quick and easy. Touching their killing device to a victim’s head takes them out instantly. There is no definitive rule book to time traveling in movies, but it helps if the rules are simple and straightforward. The number one rule of Same Boat, also directed by Roberti, is that there are no do-overs. If someone restarts a mission, that assassin will die.

James and Mot are assigned to a 2019 cruise ship for their next mission. Their target is Lilly (Tonya Glanz), a hard-working professional whose future misdeeds don’t become clear until later. She makes the bold decision to break up with her boyfriend (Evan Kaufman) before the ship even sets sail, leaving her as an easier target. Mot becomes seasick, leaving the job to James. After a few witty meet-cutes around the ship, James and Lilly actually start to develop feelings for each other.

Multiple characters at the beginning of the film mention the false concept about how there are “no rules” on international waters. On any vacation trip, especially cruises, every feeling and instinct is amplified. Short term love affairs are more believable. The filmmakers must have taken the same carpe diem approach while shooting in secret. For being shot in secret the scenes are surprisingly clean. Same Boat maintains a quirky offbeat energy without feeling anarchic or disorganized. James is a sarcastic and relaxed character, and the film follows his lead.

The cruise takes a few stops at Key West and Cazumel, which allows the characters to work together outside of the ship. The main storyline is broken up with travel vlog-esque montages and goofy conversations between cruise staff members. James has every reason to savor his cruise experience, earlier he mentions that 2019 is the “twilight of America”. Not much else is explained about the future, other than fruit, ice cream, and laundry detergent possibly being nonexistent.

Another benefit of a vacation is to step outside everyday life and reflect on careers and relationships. Lilly knows she is good at her job, but James is having a harder time finding fulfillment. As James falls for Lilly it becomes harder to lie to Mot about the assignment. A scene-stealer is one cruise staffer who practices amateur magic tricks and gives James advice on finding his purpose. The character is self-aware enough to joke about how he is giving the most convenient quote at the most convenient time. The film’s bone dry sense of humor is effective, never taking itself too seriously.

Everyone is constantly looking for new quarantine content. Same Boat is a breezy respite from rewatching Disney musicals and Netflix docuseries. For a film produced in 2019 it feels like it was made in a different era. The two leads are enjoyable to watch and the chemistry isn’t forced. Roberti is a deadpan performer but he is also able to convey James’s romantic urges. Same Boat is sarcastic without being cynical. The guerrilla style filmmaking gives the movie a likable, underdog spirit.

And yes, there is a mention of travelling back in time to kill Hitler. 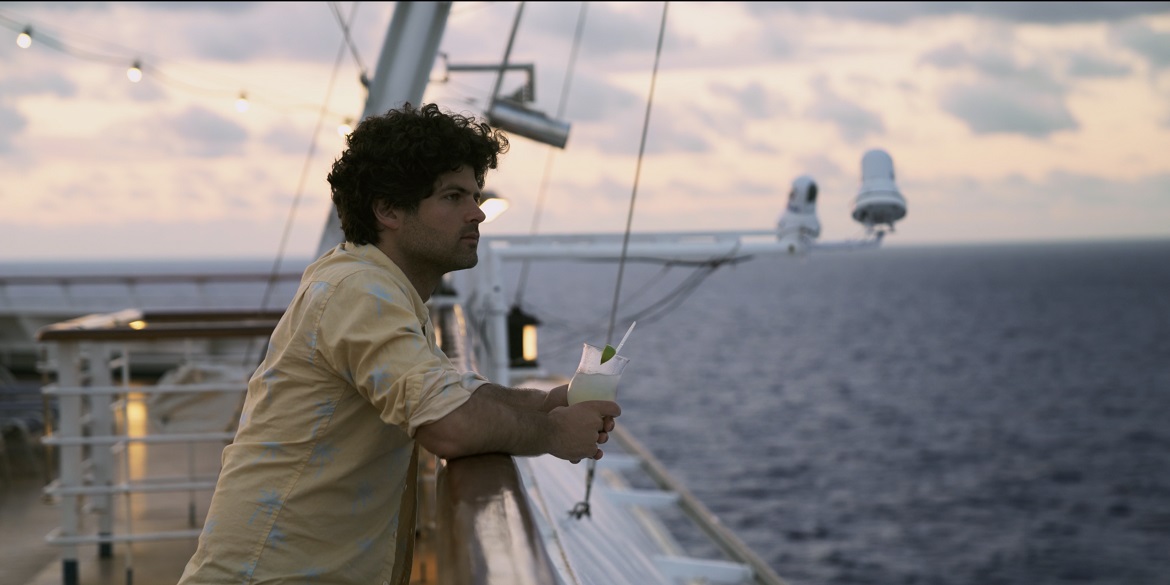