Review: ‘Marry Me’ Is A Rom-Com Featuring Little In The Way Of Romance And Almost No Laughs 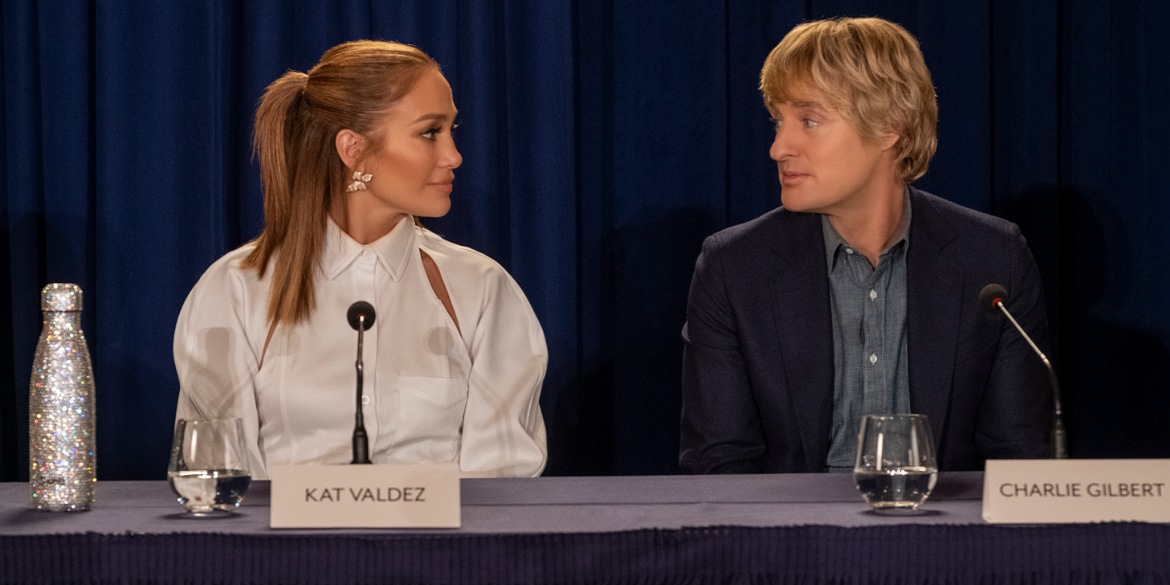 Once upon a time, romantic comedies ruled the multiplex. Careers we’re forged or rekindled by one’s ability to snag a coveted roll in a big blockbuster rom-com. Yet, saturation eventually. The difference was that the formula endured for decades, outlasting a basic fad. Mixing narrative bit here and there to match the litany of stars clamoring for such an easy studio picture. Nowadays, romantic comedies get relegated to streaming services or come in the form of young adult adaptations. Which is what makes something like Marry Me such a curiosity.

A new rom-com? In this economy? With these actors who had been around for years? Sadly, whatever hopes may have existed for reigniting that flame of old is snuffed out early on, as the film is a paint-by-numbers affair and not much else.

In the film, Kat Valdez (Jennifer Lopez) is one of the biggest musicians alive. As high as she’s gotten she’s about to embark on a career highlight, by getting married on stage to fellow singer Bastion (Maluma) and performing their hit song “Marry Me” to 20 million viewers around the world. At least that’s the plan until the night of the performance Kat learns of her fiancee’s recent affair. Hurt and confused, she spots single math teacher Charlie (Owen Wilson) in the crowd, holding his friend’s “Marry Me!” sign. Acting on an impulse she calls him to the stage and the two are married on the spot. Can the unlikely couple overcome their differences and make things work? If you’ve seen 1 or 75 films like this, you already know the answer.

As ludicrous or comical as the story might sound, director Kat Corio and her trio of writers (Harper Dill, John Rogers, and Tami Sagher) play the beats rather straight-faced. Nothing overtly dramatic or outlandish occurs. The humor baked into the story is also low-key, creating a weird energy. An odd decision, given that Charlie’s main “defect” is that he’s safe and boring. Something criticized by both his best friend Parker (Sarah Silverman) and daughter Lou (Charlie Coleman) at numerous parts. She’s famous and into all social media! He’s an average guy with a flip phone! Ohhh boy! Imagine Notting Hill without an ounce of the chutzpah that Richard Curtis laced his scripts with in the early aughts. In its place are beats so predictable that if you drank each time a cliche moment occurred, you’d die from alcohol poisoning.

The biggest strength that Marry Me has going for it, is focusing on what a multifaceted talent Jennifer Lopez is. At 52 years old, there’s never a moment in the film where it’s ludicrous to believe she’s the biggest musical star in this fictional world. Her stage presence and showmanship are solid. Her branding (while intrusive) is on point. Likeability and singing voice are pitch-perfect (and featured on 5 original songs). If anything, the biggest issue with the character and Lopez’s performance is that Kat simply isn’t interesting. Surrounded by sycophants and constantly working, there’s never a defined beat of what she wants outside the possibility of winning a Gammy-like award, someday. You like her because she’s JLo and that’s it. Not that there’s anything wrong with that.

Lopez isn’t the only reason that Marry Me stays moderately watchable during its almost two-hour run-time, there’s also Owen Wilson. Choosing two intrinsically likable and charming leads will get you everywhere. Even if the script is actively taking strides to annoy the audience. Pairing her largely empty personality (when the facade and posse are stripped away) with Charlie’s blank page life should be the death knell for the story. Yet, due to the charisma of Wilson and Lopez, you can see how the couple complements each other. This may explain why central figures in the cast -like Kat’s manager (John Bradley)- disappear for large sections of the story.

Though the film purports to be a romantic comedy at heart, the narrative implores too many contrivances to give full weight to either of those genres. Instead giving way to montages or a few brief introspections to show the characters bonding or falling for each other. Lip service is made to the dangers of becoming a slave to social media, making it seem as if Kat is trapped by it. Only to drop the story after she’s experienced one day of “real life”. There’s never a lesson learned or enlightened growth that washes over either character. Kat is suddenly surrounded by her entourage again and Charlie goes to sleep at 8:30. The biggest epiphany that Kat has in the story, is that one should use a lid when operating a blender. Seriously.

For the most part, the film is devoid of drama. Only blips of stakes or “problems” coming between the unlikely pair. The 3rd act “trouble” is built around someone making a logical decision and walking away. No yelling, no public dressing down or announcement. The decision is almost a triumph itself. Were Marry Me interested in unpacking that some things aren’t meant to be. It’s not. Because shortly after the climax occurs, the producers remembered who the target audience was. Kicking things into gear for a finale that would be more at home in a film from two decades ago.

Marry Me isn’t so much a movie, but an experience built by a random-movie-generator app that’s in alpha and only pre-loaded with Hallmark movies and DTV spoofs of Hallmark movies. It’s airless and listless and generally less of anything you’d want from a movie you’d pay attention to, featuring actors like this, made in the 2020s. The leads and the leads alone are what keep the film from being a slog, but that’s it. While that aforementioned genre of film (Hallmark) has legions of fans, trying to replicate that model doesn’t work in the studio system where it should at least feel like an attempt at some time. Then again, it may seem a tad bit foolish to disparage any film that will likely be forgotten by most who see it days after the fact. Only time will tell.

Review: ‘Marry Me’ Is A Rom-Com Featuring Little In The Way Of Romance And Almost No Laughs
45