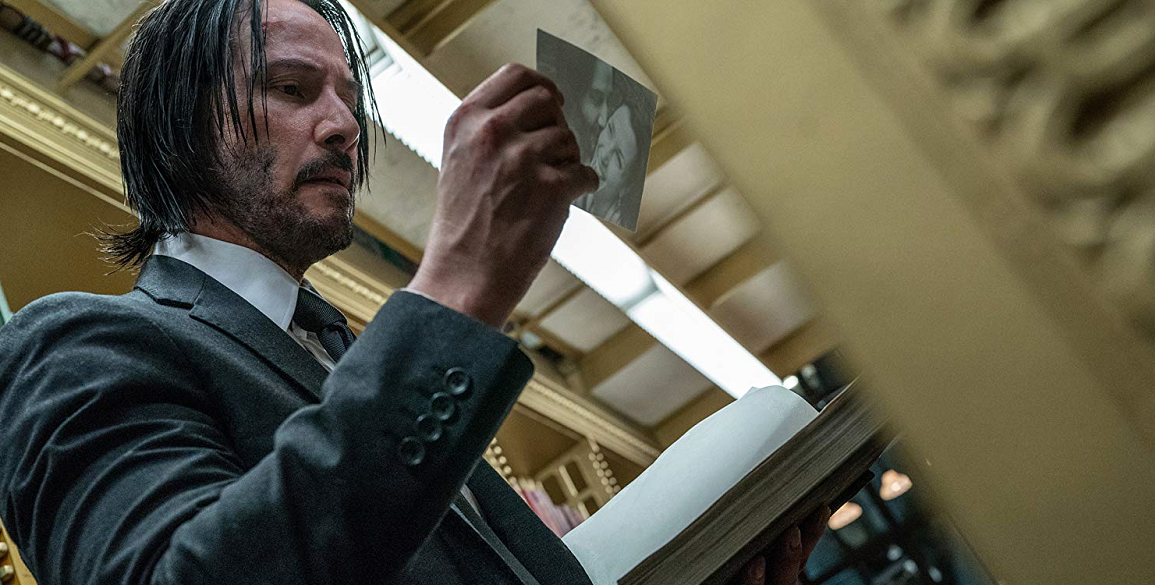 Five years ago, a little film came out of nowhere and took the action world by storm. Combining strong visuals, a compelling story, excellent fight choreography and a solid lead performance by Keanu Reeves, John Wick was an instant hit. A follow-up made sure there was even more carnage, adding in a deep mythology, to help pad the run time. Now John Wick: Chapter 3 – Parabellum sets up to take things to stratospheric heights. Filled with all the splendor and insanity the series has become know for. By and large it succeeds. At least when the action is front and center.

Events pick up directly after Chapter 2, as John runs through the streets of New York, racing against the clock. Literally minutes away from being labeled “excommunicado” and a $14 mil contract on his head, for having killed a member of the vaunted “High Table”. It’s not a place anyone wants to be. Yet John Wick isn’t just anyone. So naturally he refuses to die, calls in a favor to The Director (Angelica Huston), makes his way halfway across the globe, meets up with another old associate, Sofia (Halle Berry) and searches for the one man who can give him a “normal” life back, The Elder (Saïd Taghmaoui). As the world is never that cut and dry, the promise of hope comes with the price of another’s life.

Meanwhile, stateside, The Adjudicator (Asia Kate Dillon) shows up, demanding those who have helped good old Johnathan show fealty or die. That’s the most succinct way to explain this 131 minute exercise in action overload, without spoiling exact beats. Not that it’s filled with an abundance of twists and turns (just a few). More so that explaining away pieces of the movie in any detail is to expose a few flaws, in the process. After all, what everyone really cares about isn’t the story, it’s the action. And boy does it ever deliver on that front.

When your two proceeding entries are held up as the pinnacle of a genre, it can be an overwhelming hurtle to clear. No worries, as John Wick: Chapter 3 clears 17 hurtles in one leap, brandishing two firearms and handing out lobotomies as if it were about to be outlawed. Seriously, the number of head shots contained here is astonishing, showing how fluid and r-rating can be stretched, when you have a big enough budget and the promise of destroying the box office.

This may sound weird, but as the world around the central character grows, it makes him feel smaller. The first film is comparatively more intimate, taking its time before the carnage unfolds. As much a noir character-piece, as it is a rip-roaring action beast. There’s flourishes that paint the corners with an air of mystique to things. All the better because they lack explanation. The second film expanded upon the latter two elements, while leaving the character where he was. Things were more vibrant, sure. It just didn’t say a ton about the evolution of Wick, as he went through yet another meat grinder.

Some will disagree with this gripe, yet it feels as if it should be addressed. The world that John Wick has created, seems mostly devoid of interesting female characters. Three films in, the majority of female parts exist only in a few categories: those who have loved John, those with ties to his past and (most obviously) those who want to kill him. Yes, this is a largely testosterone driven affair, but that doesn’t mean women should be given short shrift. At this point in the series, it’s a slight sticking point, until it gets rectified. If you disagree, that’s fine. Though consider the fact that 3/4 of the female parts in Chapter 3 are relegated to largely interchangeable individuals dressed as quasi-Rosie The Riveter pin-up types and never utter a word.

There is one lone bright spot in that arena, in the form of Berry’s Sofia. In a film with paper-thin performances, Berry crafts a compelling figure. One cut from the same cloth as Wick. She too was granted the briefest of tastes of life outside the killing, before being forced to cut it from her existence. Then there’s the fact that she’s physically Wick’s equal. Leaving behind a trail of blood in her wake, that is truly awe-inspiring. If her appearance here doesn’t lead to a potential spin-off down the road, there should be riots.

John Wick: Chapter 3 bends over backwards to make a movie that can please everyone. Action is pushed past the breaking point, leaving the back half a tad hollow. The mythology gets new layers to it, even though it just leads to a litany of more questions. Glimpses into John’s past make him seem more spectral than the man he was, just a few years ago. Honestly, the thing is, none of this matters. Sprinting from set piece to set piece to set piece, there isn’t time to process it all. Once you step away though and look back, that’s when the cracks begin to show.

“But who goes to these for plot logic?” you may ask. A fair point, sure, yet as this is a movie, instead of a sizzle reel, it’s of some importance. John Wick started almost as a lark. “Thugs kill a guy’s puppy and he takes revenge.” It’s a logline that sold many people. Then word got out that the film wasn’t so simple. It wasn’t just a puppy, Keanu Reeves brought the goods (emotionally and physically) and the action was unlike anything the US had produced, in some time. John Wick: Chapter 3, by comparison comes off as a massive undertaking. Both in terms of scope and expectations. It’s ten times the size the original. There’s a billion stylish characters, in a world where the rules rule everything and each minute that passes means another three have to be explained. It’s pretty though and that’s enough for most people.

Again, and this cannot be stressed enough, the large majority of John Wick: Chapter 3 – Parabellum is an absolute joy. The cinematography is stunning. Shifting from cramped, desolate hallways and interiors to a lush and wide open Morroccan cityscape. Neons pop, browns crush and red splatters across the screen. The action is just as glorious as you’d hope. A symphony of violence and bloodshed, that’s likely to leave many in disbelief. It starts out at already entrenching upon ridiculous level, becomes art, then trash, then art again, before finally reaching a level of almost transcendent state. A budding reliance on CGI at a couple points, almost derails things. Though not entirely, because even those instances are effectively cheer-worthy.

So after all the hemming and hawing, where does that leave this installment of the John Wick franchise? As one of the most entertaining movies of the year. It’s an easy recommendation for anyone hoping to get their money’s worth. As long as breathtaking over-the-top non-stop graphic violence, resplendent gratuitous head shots and excellent action choreography are all one requires. Those looking for a sustainable story that doesn’t go off the deep-end, without sacrificing character, in the name of overwhelming style, will be left wanting. Though it easily hints at the possibility of future adventures, the end of the movie sets as the perfect cap to one of the best action trilogies of the 21st Century. It may contain a few hiccups along the way, but John Wick: Chapter 3 – Parabellum is the kind of spectacle you really don’t want to miss seeing in a theater. 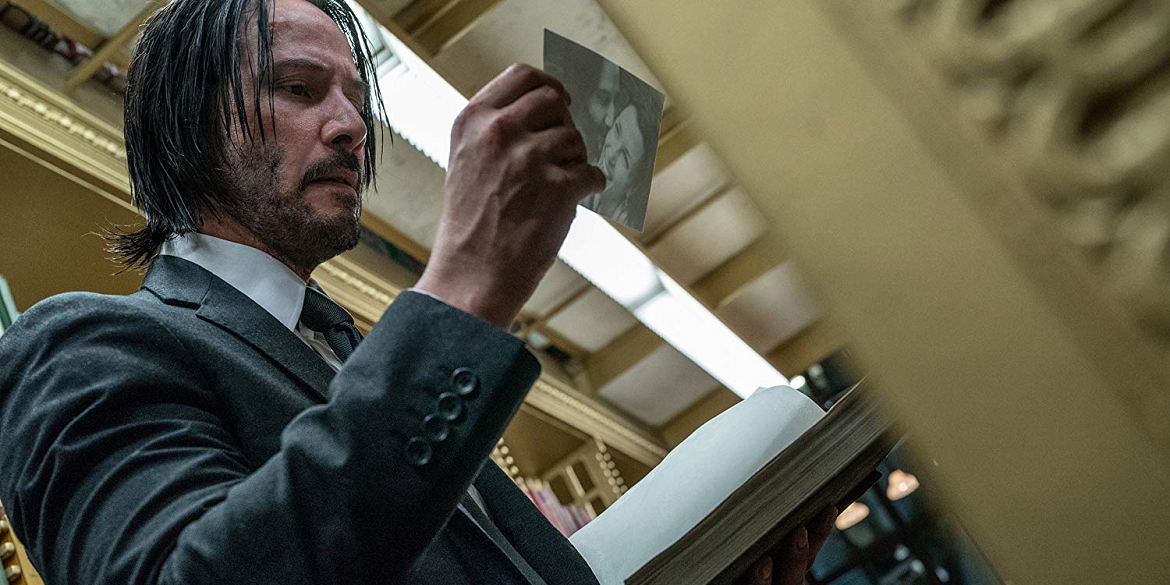