Review: “Dave Made A Maze” Is An Ingenious Lite Delight

When a film comes out of nowhere brimming with equal parts originality, ingenuity and creativity, you have to take notice. Dave Made A Maze is one such film. The kind that can launch a director, or at least production designer, instantly onto most people’s “must watch” list. That it can juggle silly trips into the fantastical with a great deal of heart is no minor feat. It may have 1/10th the budget of a blockbuster, but its all the better for it.

When Dave’s (Nick Thune) girlfriend Annie (Meera Rohit Kumbhani), goes away for the weekend, he attempts to channel his inner muse. The problem is, he’s immediately meet by a creative quagmire. He tries his hand at writing music, but gives up quickly. He follows this with a feverish session in which he produces a few hundred origami swans. To what end? Even he himself isn’t quite sure. He drowns himself in other creative fits that seemingly go no where, until it hits him. A Maze.

While other films would draw out the struggles of a creative artist to the point of tedium, Dave Made A Maze instead takes a more unique route. The aforementioned various acts Dave made to stir his artistic juices is actually done over the opening credits, done in an intriguing animation style and over in 2 minutes. It’s concise, to the point as well as painting a picture of what’s to come. 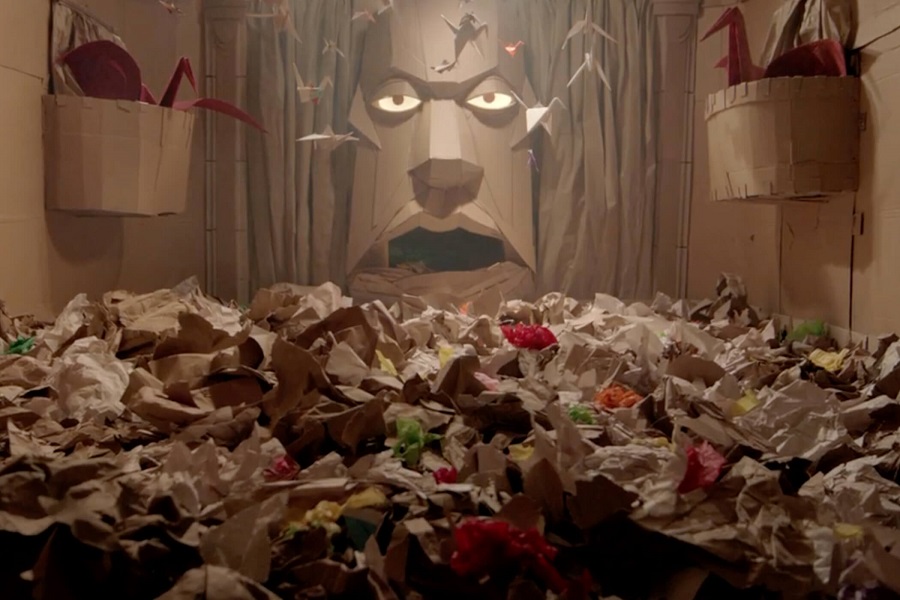 Upon Annie’s arrival home, she’s stunned by the sight of a small, but sprawling cardboard building in the middle of the apartment. Confused, but not out of sorts, she naturally calls out for Dave. From deep within the recesses of the creation, his voice rings out, though it sounds like it’s a mile away. Naturally Annie’s first instinct is to crawl inside, but Dave warns her against it. Apparently he has become lost in the maze he created, which seems impossible.

Undeterred, Annie calls upon one of Dave’s closest friends, Gordon (Adam Busch) to help figure out how best to tackle this weird situation. In short succession a curious contingent find themselves inside the small apartment, transfixed by the cardboard construct. Included among the ranks is amateur documentary filmmaker, Harry (James Urbaniak) and his crew, a few artistically inclined friends, as well as a couple of Flemish tourists.

Letting their basic desires get the better of them, along with not heeding Dave’s warning, the group excitedly enters the maze. What they find inside is glorious beyond belief. 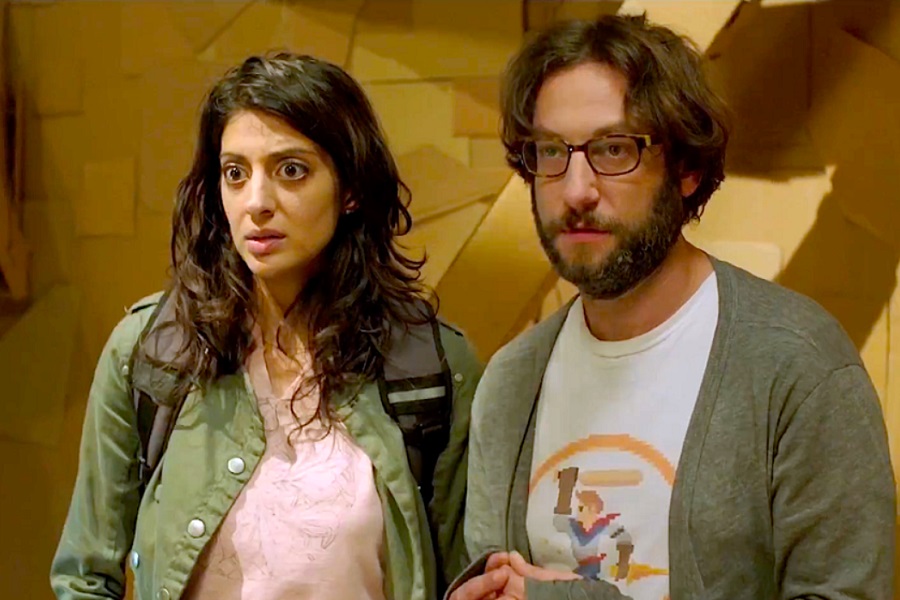 Owing equal parts to Labyrinth and Mark Z. Danielewski’s House of Leaves, the titular maze is a work of insane genius. Divided into a series of connected rooms, the “rescue party” has to be wary of booby traps that Dave has left strewn about. Even more worrisome is the fact that the maze seems to have taken on a life of it’s own. Dave doesn’t recollect certain passages and there’s even a Minotaur roaming a few of the halls. You’d be right in thinking that not everyone makes it out unscathed.

Whimsy isn’t the only thing on Dave Made A Maze‘s mind, as it throws satirical barbs in the direction of found footage and horror movies, along with stopping off in the man-child department. Director Bill Watterson (no, not that one) and writer Steven Sears understand using the ridiculous foundation as a base to dig into some big topics. Thankfully they present each of these aspects with a focus on fun. So many movies try too hard to win over audiences, but here it comes off as straightforward or at least feels like it’s accomplished with great ease. If ever a movie were deserving of an immediate “cult film” designation, this is it. 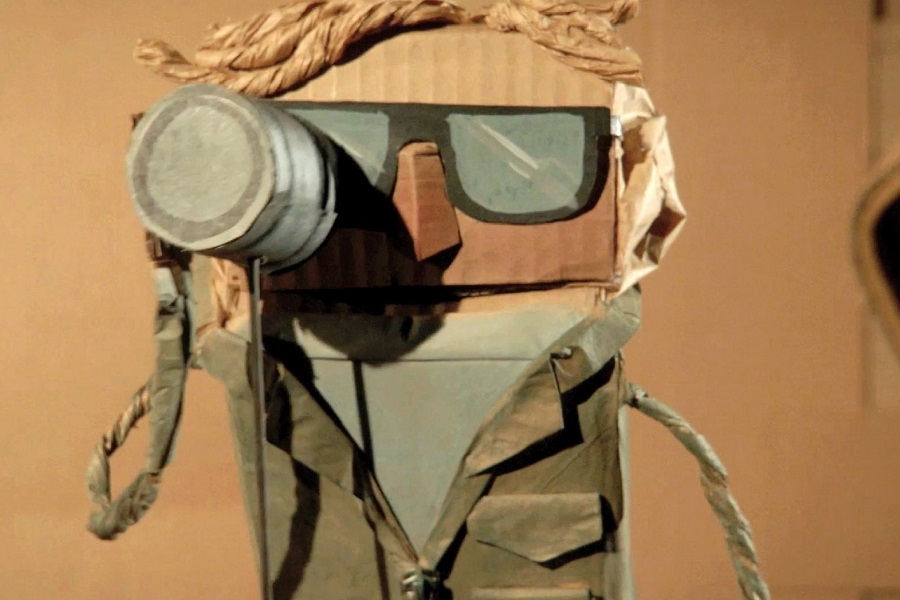 At 80 minutes the features engages in the type of economy that most movies readily forget, specially when it comes to the fantasy genre: trim the fat. By sticking to the “less is more” approach to story conventions and embracing a “bigger is better” in terms of aesthetic and design . You’d be forgiven then for not anticipating something like this to have a bit on it’s mind when it comes to relationships, growing up or taking heed of how we affect the one’s we love. People may draw their own interpretations of the later acts, but the fact that there’s so much densely packed into what on the surface seems like a quirky design showcase, is delightful. Never judge a book by it’s cover, or a maze by how flimsily it may have been constructed.

Dave Made A Maze is one of the freshest and most inventive films to come out in a while. It also features a surprising amount of depth and pathos underneath it’s ramshackle DIY foundation. Missing this film would be to pass on one the year’s very best offerings.