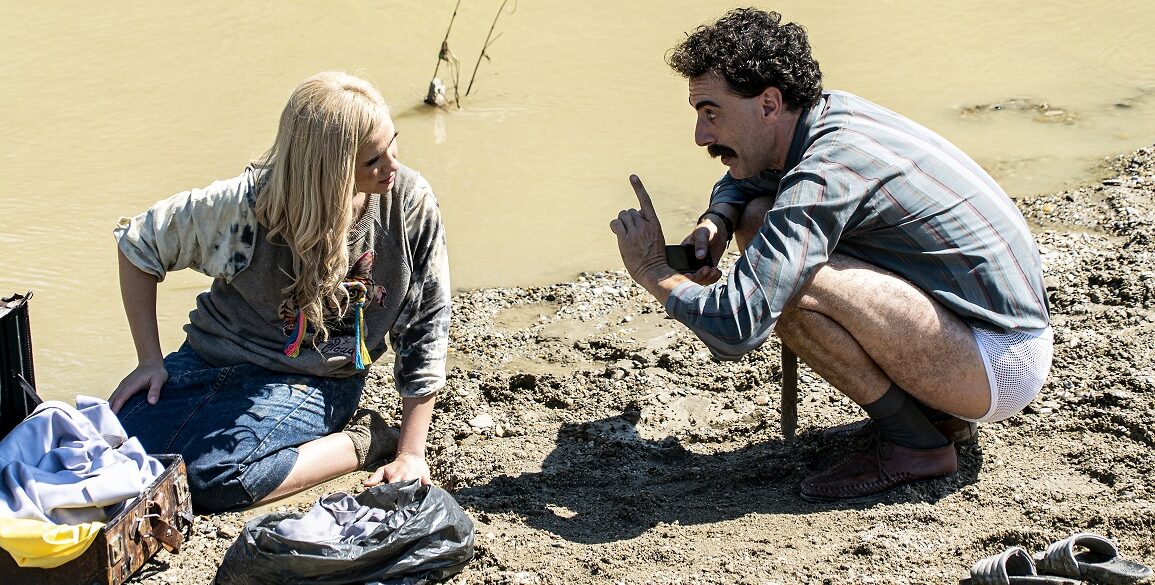 14 years ago (but also possibly yesterday) Sacha Baron Cohen made a dent in the cinematic comedy world, by taking a small character from his television show and literally unleashing him upon the world. A largely unsespecting and naive world. Since then, things have changed a lot. With a rise in technology and how people share information. In others, it’s very much the same. America remains ripe as ever to be skewered, once again, by the antics of Kazakhstan’s 4th ranked journalist, Borat Sagdiyev (Cohen). It’s a film that could have just been a cash in or, at worst, a simple retread of the original. Instead BORAT SUBSEQUENT MOVIEFILM: Delivery of Prodigious Bribe to American Regime for Make Benefit Once Glorious Nation of Kazakhstan, is hands down one of the funniest films of the year. Even if it’s a little shaggy in parts.

Following the release of his exploits of his first trip to America, Borat is a shell of his former self. He’s been publicly humiliated. His position of reporter stripped from him. His family, well they seem mostly unchanged. When opportunity stikes to represent his country once again, to atone for making them a laughing stock, he rises to the challenge. As easy as the task he’s given, things quickly go awry. The gift he’s set to deliver is in less than optimal condition. To make matters worse, his daughter Tatar (Maria Bakalova), has unexpectedly stowed away and is now left in his care. Thinking as quickly as he can in his feet Borat devises a new plan, chatting his way across the country, in hopes of fullfilling his duty.

And that’s all that will be said about the plot. Both because it’s all that can be divulged and anything that follows must be witnessed for yourself. Such is the nature of a film with Cohen running around in-character (or “characters”) and the kind of situations he gets into. Describing scenes doesn’t do them justice, at all. Being flabbergasted by what’s occuring onscreen and then reacting, is part of the experience. Rest assured, more often than not, you’ll be laughing. Probably covering your face, at the same time. Without a doubt, this is the cringiest of cringe-fests imaginable. For better and worse.

The pranks and interviews aren’t always as confoundingly insane as you might expect, yet when they do swing for the fences, it lands beautifully. The targets themselves are slightly obvious (Republicans, Right Wing rallys, politicians, etc). It’s the way in which they’re tackled or mocked, that makes this a joy to watch. Without saying much it’s both incredibly timely and coming at a time when laughter is very much needed. After all Borat is still Borat. Even when you try to put him in various disguises. The more ridiculous or shoddy they appear, the better. You’re never fully taken out of things by how implausible it all seems. Rather it manages to heighten the reality to a degree that makes all that much more enjoyable.

Part of the genius that makes Borat Subsequent Moviefilm fun, is how it works around the biggest question of “if people know who Borat is, how can you make another movie?” That’s where the magic that is Tatar comes in. Whereas Ken Davitian’s Azamat was a cohort and foil, Bakalova is an entirely different beast. She takes center stage in some of the film’s best moments and threatens to steal the movie wholesale from Cohen. As a duo, they’re a formidable pairing, taking down targets left and right. Theres dance number with the two that is sure to be talked about for years to come.

For a movie that’s about pushing the edge and alienating a portion of viewers, there’s a sweet and strange relationship that develops between Borat and Tutar. Having that there fuels the more “traditional” story beats. It shouldn’t work. You shouldn’t be feeling pangs of sweetness in a film like this and yet it weirdly works. Some may take issue with how much time is wrapped up in these moments, though it’s was a key element of the first film, too. Its inclusion is tantamount in making Borat feel a tad softer. At least comparatively.

Watching Borat Subsequent Moviefilm, it’s hard to believe that some of the pranks managed to be pulled off at all. Often stretching the point of acceptable credulity. The smaller ones you can handwaved away and have a level of outrageousness that’s equal to the original film. Most often in exposing outdated ideals that some part of America still hold true, such as a debutante ball. Duping individuals in not-so-elaborate costumes isn’t that difficult a feat. It’s the bigger bits that seem too outlandish or far fetched, yet if anyone was able to pull it off it would be Sacha Baron Cohen.

Of course, what most people want to know about is the laughs. Borat Subsequent Moviefilm aims to be both as offensive and alienating as possible. Something that shouldn’t come as a surprise at all. In some ways the Borat films hit upon the same beats that the Jackass series embraced. Taking seemingly idiotic, crass and offensive ideas and make an art out of it. Sure it can seem a bit cheap and easy at times. Yet the level of craft, coordination and straight up balls that Cohen, Bakalova, director Jason Woliner and crew employ here is astounding, as well as astonishing. The difference being that Borat channels its particular buffoonery into commentary. Which allows them to produce one hell of a whiplash inducing ending. One that teeters on exceedingly dark and surprisingly sweet. A “great success”, you could say.

There’s no way to flat out recommend Borat Subsequent Moviefilm, as so many people will have staunchly decided where they fall, ahead of time. For those who dismiss it outright, that’s a shame. You can dislike the film, but actually after engaging with the film first. Tear it to shreds afterwards, if you must, just watch it. It won’t convert everyone, yet there’s easily something in here to elicit a laugh out of almost anyone. Laughter is cathartic. Laughter is infectious. While no means the greatest movie of the year, this may just be a film that so many need right now. 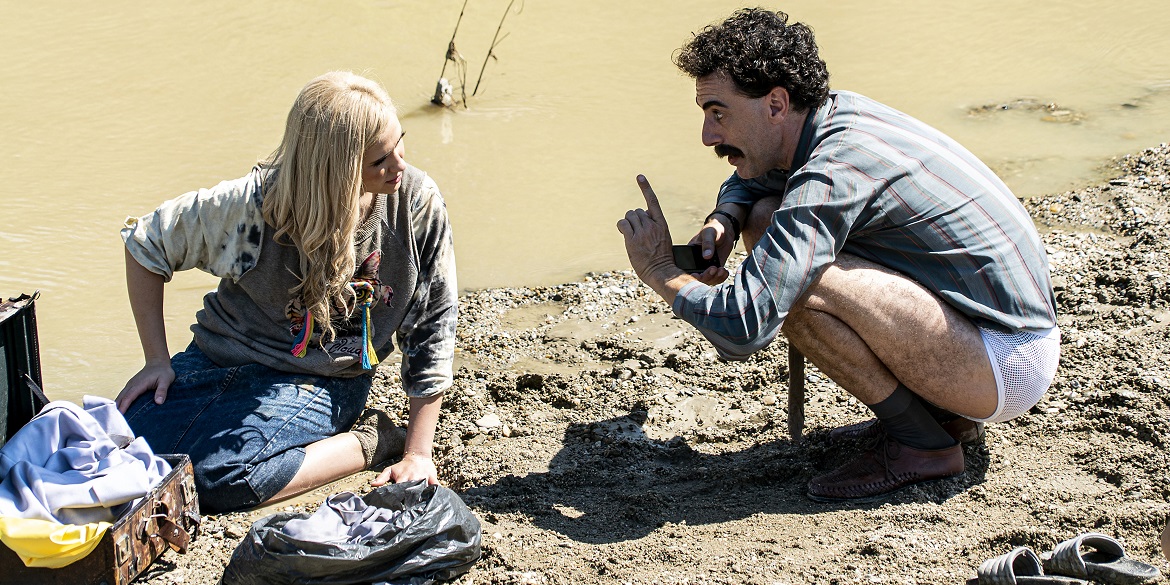