From its title and synopsis, 20th Century Women isn’t quite the movie I expected to see.  Yes, it’s primarily about three women during the end of the 1970’s.  However, they’re viewed from the perspective of a boy, 15-year old Jamie (Lucas Jade Zumann), whose divorced mother, Dorothea (Annette Bening) is concerned about his upbringing and recruits two younger women to assist her: Abbie (Greta Gerwig) and Julie (Elle Fanning).

Abbie is a 25-year old survivor of cervical cancer who rents a room in the big house Dorothea is restoring. Jamie bonds with her based on their musical preference: punk rock.  Julie is a couple years older than Jamie and sneaks into the house every night to sleep with him… platonically.  Jamie would like to bond with her in a different way, but she wants only to be friends.  It’s not clear why Dorothea thinks either of them would be a good influence on her son…

…but she’s growing increasingly frustrated with their ability to communicate. I get the sense she really just wants someone he likes, possibly more than her at the moment, to look after him.  She micromanages the situation, though, which pushes him into participating in some questionable antics.  He’s really just a good kid who’s been surrounded by women most of his life, without a male influence.  His mother seems to be going through growing pains more than he is. 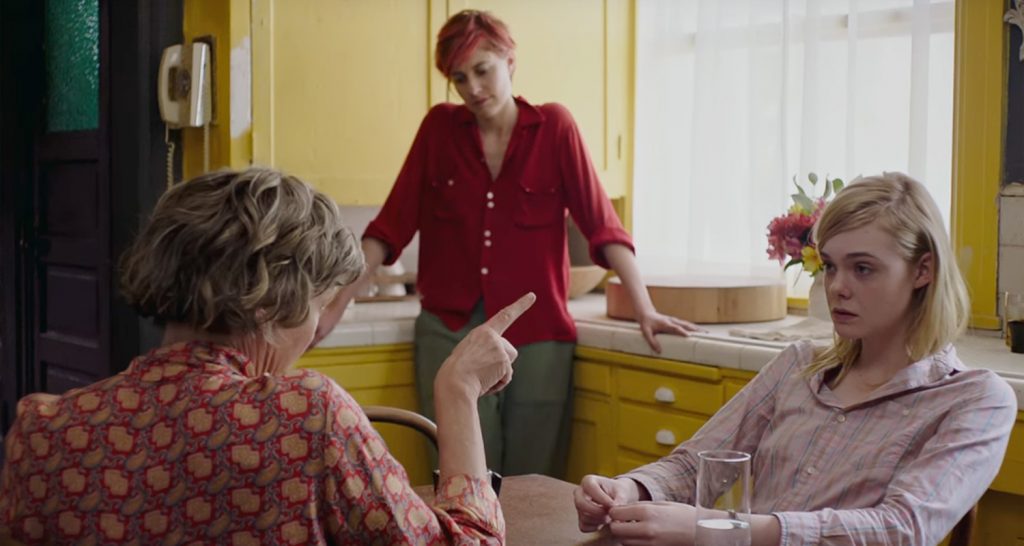 One of the lines reflects Dorothea’s state of mind, considering that Jamie believes she is a sad woman. When someone asks if she’s happy, she replies, “Wondering if you’re happy is a shortcut to being depressed.”  Another reflects the wisdom that Julie does have to offer, even though she’s the first to admit that she’s a bit of a slut.  When Jamie tries to kiss her, she says, “You don’t kiss a woman unless you know what you mean by it.”

I liked 20th Century Women, although nothing about the era felt familiar to me, even though the character of Jamie was born a year after me and would have been close to the same age I was in 1979.  That’s probably because the movie’s not really about the era.  It’s just the background for a story about the people we call family, and it’s timeless in a way.  As with Beginners, I didn’t feel like I knew the characters, but I enjoyed spending two hours with them.