It’s not a spoiler to say that in Red Joan, Joan Stanley (Judi Dench) is exposed in her golden years as having been a Russian spy during World War II. For the first part of the movie, you might think it’s a did-she-or-didn’t-she mystery; however, publicized as “inspired by true events,” you can easily learn that the character is based upon real life KGB agent, Melita Norwood.

The fact that Lindsay Shapero’s screenplay unceremoniously reveals the truth somewhere in the middle of the story represents its matter-of-fact approach to the details. Several times, it avoids too much drama, which is about all that remains in Red Joan since it doesn’t treat the material like a thriller. I’d like to say this makes the movie unpredictable, but it instead makes it lackluster.

The movie’s greatest asset, Dench, is squandered. Understandably, her story must unfold as a series of flashbacks. The actor playing young Joan, Sophie Cookson (the Kingsman movies) is good; but Dench’s scenes are cut so short that there’s no build-up for the emotions she experiences when she’s apprehended in her home following the discovery of incriminating files. We want to see more of her.

More problematic is that she asks her attorney son, Nick (Ben Miles) to represent her during the inquest. Not surprisingly, he’s distressed to learn what his mother has done. The ultimate resolution regarding their relationship is sudden, seemingly written to give Red Joan a happy ending instead of following the path of logical character development. It contributes to the inauthentic feel of the movie.

Likewise, the turning point for Joan seems forced. The moral outrage she demonstrates is simultaneously overdue and premature. For much of the movie, she struggles with romantic feelings toward a bad influence, Leo Galich (Tom Hughes), firmly resisting his attempts to manipulate her. Then, out of nowhere, she decides to steal information about the development of nuclear bombs and give it to Russia.

Dench portrays old Joan as a bit befuddled, while Cookson plays young Joan as sharp beyond her years. While Dench’s interpretation could disguise the guilt and shame she feels about what she did, Cookson’s contradicts the decisions she makes. They sometimes don’t seem to be playing the same character. It’s just another inconsistency in the delivery of the story that lessens its impact.

None of this is to say Red Joan is a bad movie. At 101 minutes, it’s not overlong or boring. I enjoyed watching it. I come to my criticisms of it when trying to figure out why I thought it was so mediocre. In the end, the more I read about the fact behind the fiction, Melita Norwood vs. Joan Stanley, this is just a watered- down version of the truth, and watering down the very nature of a story like this one seems counterintuitive. 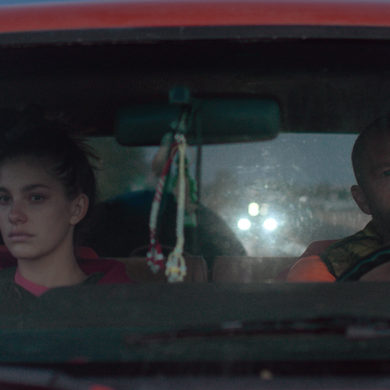 Review: ‘Mickey And The Bear’ Two Powerhouse Performances Elevate a Story of a Teen at the Crossroads of Her Life