Review: ‘Pledge’ Is A Shallow Thriller With Several Missed Opportunities 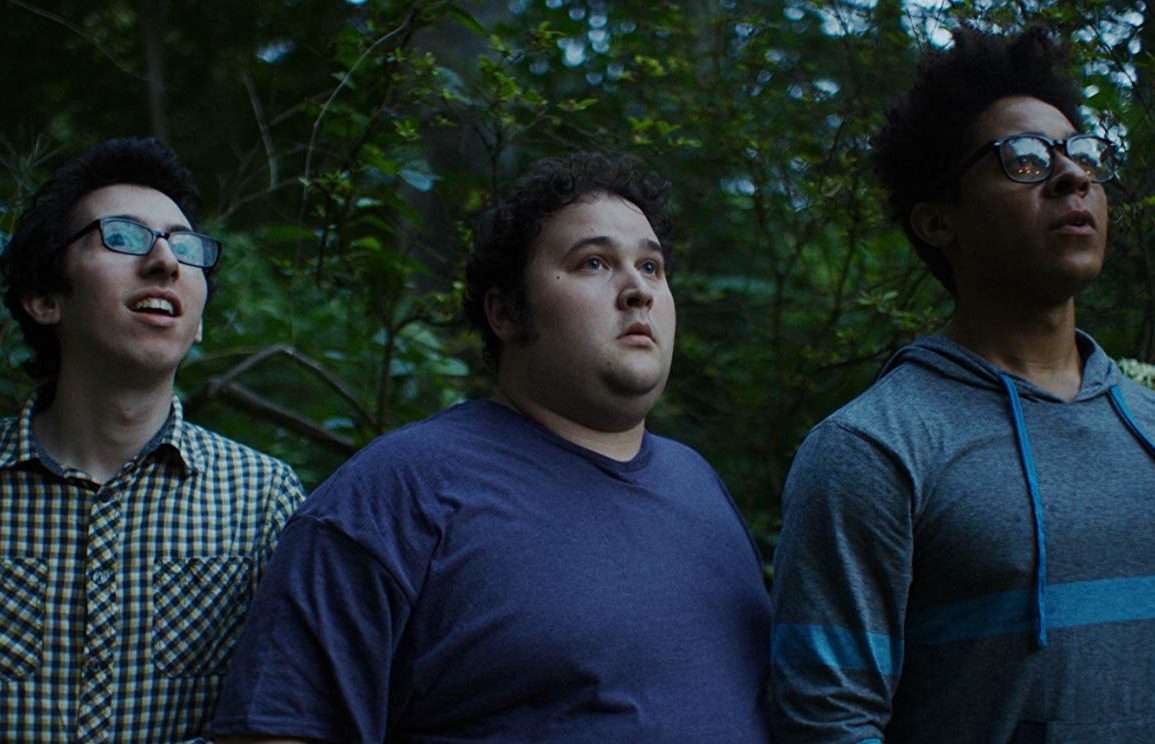 It’s difficult to pinpoint the exact time and place of Pledge, the collegiate thriller from director Daniel Robbins. The only real evidence is the opening shot of a bloodied student racing through a cornfield. Part of the film’s appeal is that this story could be in any college town, with any mysterious fraternity. For as villainous as these frat bros are, it’s comforting to know that they probably lost a significant amount of trust fund money at Fyre Festival.

Three socially awkward best friends are stumbling through Rush Week. David (played by writer Zack Weiner) is the outspoken leader of the trio, pushing his shy friends to visit fraternity after fraternity. Coincidentally, David’s obnoxious, clumsy behavior is the main reason why they are promptly removed. Another is that the trio are nerds straight out of a John Hughes movie. Two of them, David and Ethan (Phillip Andre Botello), wear thick glasses. The other, Justin (Zachery Byrd), is almost entirely defined by his stout appearance. Imagine the Big Bang Theory cast, but as undergrads.

After being kicked out of another party, a beautiful girl randomly stops them. Curiously, she gives them directions to an exclusive fraternity party, just a little off campus. Upon arrival, they meet the current residents: those bros with the Fyre Festival money. Whoever’s in charge of cleaning the old-fashioned house manages to keep it in pristine shape. Every room is full of well-dressed females. The nerds (along with two other hopeful freshmen) are treated to a party that accommodates their hedonistic tendencies. The most exclusive frat on campus now has five new pledges.

The geeks have apparently stumbled upon the “doorway to the elite”. This fraternity has a deep-rooted history and an unmatched alumni network. These are selling points to practically any fraternity, but the movie makes clear that these particular freshmen have no ambitious career goals. There isn’t any mention of school either. The primary motivations of the pledges are popularity and women, both of which are dangled like bait. The objectification of women is an issue in college culture, especially in Pledge. No female character is given more than a minimal speaking role. Ethan’s the only character who treats a girl with any sense of empathy.  The previous John Hughes comparison is even more appropriate in this case. The gender politics of hits like Sixteen Candles have become more problematic with age.

Paying any level of attention to the female characters would have provided much needed depth and context to the story. Weiner never explains a sinister connection the frat has to a sorority house. It’s one example of Pledge being as simple and straightforward as possible to fit the sleek 77 minute runtime.

The pledges agree to a series of tests during an eerie candlelit oath. It’s a display of Pledge’s greatest strength: lighting and set design. The tone swiftly shifts from a college comedy to a thriller, and Robbins effectively constructs a disturbing atmosphere. The low-budget film maintains the visual quality of any studio thriller.

The three frat bros suddenly become completely unhinged, putting the pledges through the most agonizing hazing ceremonies possible. The old traditions have a knack for involving rats in several interesting ways. Ricky (Cameron Cowperthwaite) and Bret (Jesse Pimentel) are tall and lean menaces with perfect cheekbones. The true psychopath is Max (Aaron Dalla Villa), the stereotypical short man suffering from a Napoleon complex. His conviction and pure rage keep Pledge entertaining and propulsive. Imagine Buffalo Bill but always in the irritated “Put the lotion in the basket!” kind of mood.

Pledge essentially devolves into a standard thriller, even as the fraternity’s mythology starts to creep in. A quote from Max reveals a major theme, which is “We are looking for your breaking point. Because great men don’t have one.” These frat bros have the machismo, the privilege and the arrogance to personify the toxic masculinity running rampant in modern society. However, any tangible discussion on masculinity is sidestepped for regular horror/thriller tropes. Like the frat itself, the themes are difficult to place in the real world.

Independent films don’t always have the money or the time to flesh out every topic it brings up. In this case, Weiner and Robbins did not seem interested in eschewing thriller tropes, in order to tackle actual issues in fraternity culture. Pledge is ultimately uninvolved and shallow, which to some won’t diminish its entertainment value. For a no-frills watch, it’s not the worst option out there. For anyone looking for something more,  though, it’s impossible to ignore all the missed opportunities.

Review: ‘Pledge’ Is A Shallow Thriller With Several Missed Opportunities
48
48