The world premiere of Meow Wolf: Origin Story debuted this year at SXSW and the excitement for this film was as electrifying as Meow Wolf itself. Directors Morgan Capps and Jilann Spitzmiller bring us the incredible story about a group of artist in Santa Fe, NM that start a DIY collective called Meow Wolf. The immersive, large scale exhibitions crack open a profitable niche in the arts industry, even as their social mission is challenged by their rapid success.

Meow Wolf, in short, was created by disenfranchised artists of Santa Fe, New Mexico that were tired of the establishment that the art world brought. It started out as an outlet for artists to collaborate and the first warehouse they rented out turned into a creative collective of an out of this world, psychedelic experience for any that entered. It wasn’t always easy and the journey was a long fought battle that seemed to weigh on the minds and souls of all the artists as they questioned who they were and what they were becoming. Meow Wolf: Origin Story is a look into the beginning, the struggle and heart ache, the amazing artwork and what a bunch of artists managed to accomplish that changed the art world as we know it. 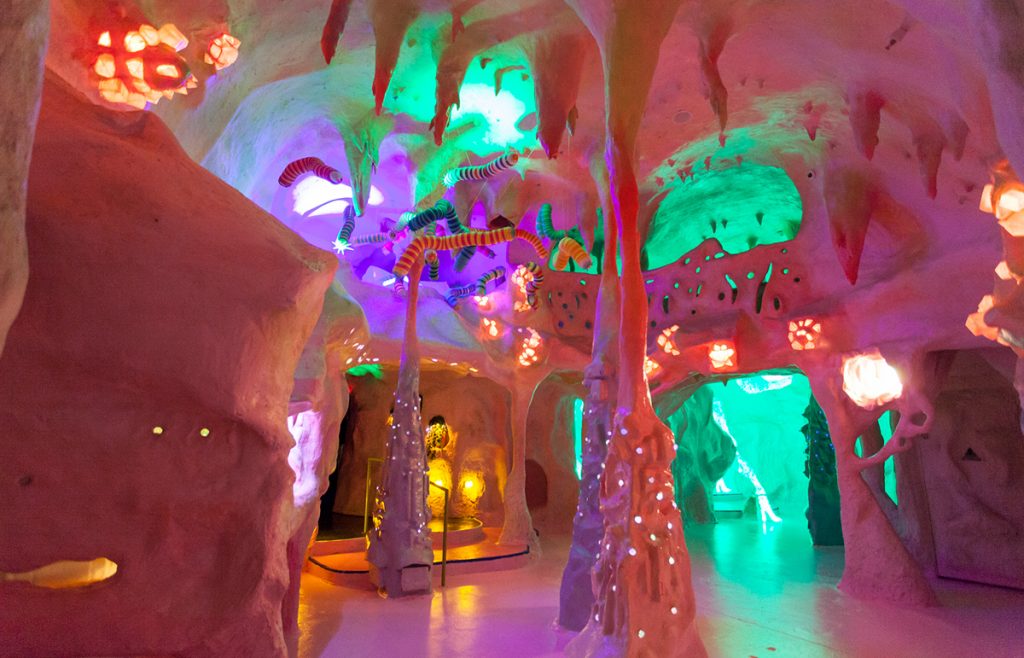 This documentary is a fantastic collaboration of sorts all in itself. Directors, Capps and Spitzmiller do an amazing job of not only retelling the story and journey of Meow Wolf, but also using a great deal of original footage and amazing animations to really show the spirit of Meow Wolf. It’s the next best thing to actually experiencing the installation yourself. The documentary dives deep into the beginnings of what was just meant to be an outlet for a few artists to express themselves. But like all anti movements, they became a movement themselves and Meow Wolf: Origin Story does an amazing job of capturing the emotions of that journey of everyone involved.

After the innocent fun and art making ended and it became apparent that they had a real product on their hands that could be marketed, it was time for them to really sit down and decide what direction they wanted to go. After seeing that their installations were profitable, Vince Kadlubek, the business mined artist of the group decided it was time to push forward and create an immersive space the was permanent. Oddly enough he sought help from the great George R.R. Martin asking him to be their silent partner. He was impressed with what they were doing and obliged but the project ended up costing over two million dollars to create which was way over the original $1.2 million they had agreed upon. But with a lot of fundraising and people believing in their vision they were able to make it happen and Meow Wolf: The House of Eternal Return was born. Within the first year the project brought in over $6 million dollars and the rest is history.

With incredible success comes a lot of ups and downs. The original artists involved with creating Meow Wolf were no exception to these highs and lows. Nothing seemed to be off the table. From artists leaving, a lot of soul searching, long nights, death and sadness all played big roles in their growth. The one thing that this documentary does is show how incredibly easy it can be to lose yourself and get off track from your original plan when success starts to happen. Especially as an artist it’s important to not lose yourself and who you are because of fame and fortune. Meow Wolf: Origin Story doesn’t shy away from these struggles and all of the artists are very candid about speaking out on how they deal with it, still to this day.

Even if you aren’t interested in the struggles and the ups and downs that Meow Wolf went through to get to where they are today, after watching this film you will certainly want to visit. It’s hard not to get wrapped into the imagery and completely insane works that these artists create. Hearing about their journey was just a bonus in my opinion. If you don’t think you will ever make it out to Santa Fe, NM have no fear because Meow Wolf will be expanding to Las Vegas and Denver, CO in the very near future. What these artists have created is exciting and new and honestly, it has changed the art world that they sought out to dismantle and that is a success story in my book!