Review: Solid Performances Can’t Make Up For A Shoddy Script in ‘Hotel Artemis’

If Hotel Artemis is anything to go by, the future of 2028 won’t at all be exciting. To be honest, things looks downright depressing and oppressive. California alone has seen water become fully privatized. When the main corporation that controls the vital resource decides to shut off supply to the public, a massive riot ensues. In the middle of the chaos, on the penthouse level of high rise, a disparate group of criminals are on a collision course, whose aftermath with prove bloodier than anything on the streets.

The titular building, or “dark room”, as it’s called in the world of Hotel Artemis, is medical halfway house for the criminal set. Run by the “Nurse” (Jodie Foster), only paying members are accepted entrance. Such individuals are marked by a scar on their wrist, from an implant. Once on side of safety, guests are referred to by the name of the suites, in which they are staying.  Thankfully there are two rooms left the night of the riot, as “Waikiki” (Sterling K. Brown) and his brother “Honolulu” (Brian Tyree Henry) are in dire need of repair. A bank robbery went south and the siblings escaped with couple of bullets embedded in them and one mean MacGuffin.

While the main story is little more than a standard “bottle episode”, first time director Drew Pearce (writer of Iron Man Three) strives to cover up any narrative shortcomings with a dizzying combination of glitzy sci-tech and a star studded cast. For the most part it works, until the dire and trite dialogue  becomes too much to juggle and starts to come apart at the nanite-ladden seams.

For a film that carries itself thanks to solid acting, there are two that stand on the shoulders of everyone else. While the first half of the film sees him mostly slinking through hallways, Sterling K Brown proves there’s no way to stunt his charisma. Eventually things give way to a couple juicy moments that see the red-hot actor turn on the kind of sizzle he’s known for, but it comes off as (with many things) too little too late. Almost as if the film is incapable of sharing the spotlight.

That’s largely because the film truly belongs to Jodie Foster. After five years away from acting, Foster slips comfortably into the well-worn sneakers of the primary health physician. She’s the heart and soul of all that takes place on screen. Her slight, yet quick shuffle, soft scoffs and reliance on music cues for sanity, informs everything about the character. The soft spoken, but commanding nurse doters from room to room, making sure both everyone is alive, and that the rules are being followed.

She’s flanked every step of the way by her mountain of an orderly, Everest (David Bautista). Their interplay is so simple, yet extremely sweet and moving. In a see of stock characters, these two are given at least the spark of life. If there’s any justice in the world, someone will team these two up again and soon.

That’s high praise in a film where all the other characters toe the line of one dimensional. When your cast includes the likes of Sofia Buetella, Jenny Slate or Charlie Day and they all barely register, something is amiss. Oh, and the less said about Jeff Goldblum’s extended cameo, the better.

Unfortunately after assembling cool toys in his ultra-stylized sand castle, Pearce isn’t quite sure what to do with his shiny playthings. He hints at elaborate backstories and shared history, when all he’s doing is forecasting an inevitable endgame. To pad the time Hotel Artemis has a strange habit repeating dialogue. It occurs at least 5 times, within a 96 minute span, that simultaneously feels too short and way too long.

Any time a film is built on the thin of a high concept gimmick, it’s sure to be met with a fair share of scrutiny.  To a degree, it’s hard to fault Pearce for wanting to hit a home run in his debut. His scripting duties on two major hits almost decrees it. At the same time he must be held accountable, since this is his baby. Things are a mess. There’s no propulsive drive in the third act. What little action there is, proves a needed injection, but ends just as quickly as it starts.

For all it’s problems, there’s still enough good ideas and strong performances throughout Hotel Artemis to make someone sit up and take notice. Some may even love what’s on display. It’s just so at odds with itself, that an outright recommendation is difficult. No amount of pulp, noir and sci-fi flourishes, can save the film from. Just because a “C” is a passing grade, doesn’t mean anyone should strive for it. Which is a shame, as it makes for a nice enough place to visit, but not the kind you’ll readily admit to friends you spent money on. 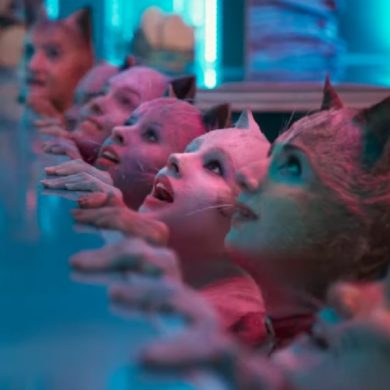