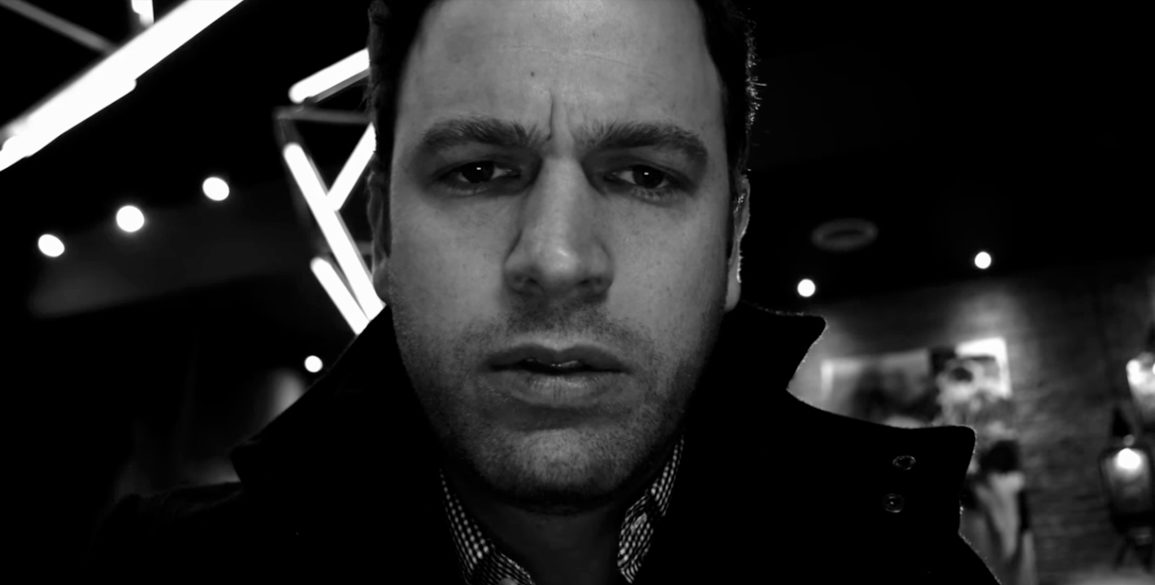 Living with in-laws can lead to some desperate decisions. Joel (Zack Robidas) is a Silicon Valley investor forced to live with his wife’s parents after his latest business falls apart. Finding a day job is not an option. Thousands of miles away from San Francisco, Joel stumbles upon an old classmate who has a tantalizing investment opportunity.

The startup’s product is XVR, or extreme virtual reality. The VR industry is catnip to Silicon Valley investors, and Joel needs little convincing to test it out. He will do anything to avoid another judgmental glance from his in-laws, even ignoring several red flags.

Empathy, Inc. is an unnerving sci-fi thriller from director Yedidya Gorsetman. The black-and-white aesthetic keeps the audience off balance and distrusting of the shifting realities. Nicolaus (Eric Berryman) sells XVR as a way for wealthy clients to experience “real life”, meaning the reality of someone less fortunate. The experience helps the client appreciate their blessings and have empathy for the poor. The idea is the film’s most provocative statement, that the wealthy have to go to these ends to feel an ounce of empathy.

The sweaty genius behind XVR is Lester (Jay Klaitz), providing manic energy as a counter to Nicolaus’s suave, corporate personality. He straps Joel in a chair and injects an unknown substance in his arm with no explanation. The film knows not to get too bogged down with fake science lingo (hence the name “Extreme Virtual Reality”).

Joel awakens from his first XVR experience as a changed man. Even though he only wants to invest in the company, he is also the perfect client. Joel has the same unchecked arrogance as any Patrick Bateman-esque businessman. He almost immediately becomes addicted to these visceral escapes from reality. That is, until he starts noticing that the trips might have disturbing consequences.

Seconds, the 1966 black-and-white thriller from John Frankenheimer, also sells a new look on life for complacent individuals. A bored suburbian hears about a top secret program and comes out with a beach house and the body of Rock Hudson. Both movies are selling fantasies, but on opposite ends of the societal spectrum.

The notion of “a clean slate” is a sci-fi premise that is always too good to be true. Character’s tend to lose their grip on reality, when they look in a mirror and see someone else’s face. In Frankenheimer’s classic, he builds the paranoia to its absolute breaking point. Whereas here, Gorsetman uncovers that mystery a little too early.

Empathy, Inc. works best as a slow burn, hiding secrets in shadows. When they disappear, the film transforms into something more campy and convoluted. The transition is not seamless, so there are pacing issues. Despite these missteps, there is an inherent likable and endearing quality that keeps Empathy, Inc. afloat. The movie delights in exploring every avenue of its premise.

The film is more skeletal and grimy than any episode of Black Mirror. It asks intriguing questions about identity, by juxtaposing Joel’s experience with his wife’s career as an actress. Jessica (Kathy Searle) constantly talks about how she loses herself in her characters. Robidas, who bears a striking resemblance to Armie Hammer, captures the charm and the desperation needed for this role. After only two directing credits, Empathy Inc. cements Gorsetman as a name to definitely check back on, in the future.