Review: ‘Day of the Soldado’ is a Decent, if Unnecessary & Unfocused Sequel

Sequels, by nature, are finicky. Their mere existence can cause a high level of expectation, if not anticipation.  Worry and fear can then seep in, when it’s announced that certain integral talent isn’t returning. Worst off all, may be the pre-detractors, who dismiss the film before it’s even released, simply out of principle. Sadly this has become commonplace, in a time where every third movie released is a sequel. It’s almost unavoidable. Such is the case with Sicario: Day of the Soldado, the follow up the 2015 sleeper hit Sicario. While it has many impressive beats and never quite approaches being “bad”, it’s unable to rekindle the magic of the original. Nor should it have to. Yet by dropping what initially made the previous film special, it at times inches closer to being indistinguishable from most other “serious” action films.

Soldado makes its intentions clear from the start: yes, it will be more of what came before. Just now a fair share darker and a whole lot messier. In the years since the original, Mexican Cartels, emboldened by the almighty dollar, have gotten into the business of smuggling terrorists across the border. When this leads to the suicide bombing of a grocery store in the Midwest, a greasy Secretary of Defense is compelled to take action. Only he lacks the ability to do so, fearful of unwanted blow-back. Thankfully, one of his advisers (Katherine Keener) happens to know a Black ops operative, familiar with the rocky landscape. Cue the entrance of Matt Gravers (Josh Brolin).

Once again on his crusade, he enlists help in the form of Benicio Del Toro’s spectre of death. Together they plot to pit warring cartel factions against each other, until no one is left standing. Among other things, it all hinges upon the quasi-kidnapping and release of a kingpin’s daughter. Rendered in stunning detail, the sequence is one of the many times the film goes off the rails in the best sense possible.

Unfortunately, there’s so much information and various levels of disruption throw at the screen at any given time, that it begins to amount to merely white noise. The above diversion speaks to a fractured narrative that could benefit from fat being trimmed. Some characters register as little more than a blip and the two leads seem confused about their true motivations. It’s little wonder why Emily Blunt played such a pivotal cog in Sicario. Without an audience surrogate to contextualize events, the grey area explored feels weightless.

This extends up to Brolin and Del Toro. While murkiness and confusion are their main character traits by design, they lose their sheen when exposed to the spotlight for too long. That may have something to do with series writer Taylor Sheridan. Before, he was held in check by a director and star who questioned the darker moral areas he wanted to probe. Working without that makes Soldado a meaner, darker film. Something that hurts it ever so slightly in the process.

Of the two leads, Del Toro’s Alejandro fares better, partially by virtue of his character managing to have something resmbling an arc. Alejandro is a strange beast, a former lawyer turned hitman out for revenge on the main Cartel for killing his loved ones. Just like before, he helps Graver do dirty work, in exchange for taking steps towards righting the injustice for him. That he stays even remotely human, gives Soldado one it’s best sequences, showing a beating heart still thrives, within the chaos.

On the technical side of things, Soldado impresses with a handful of se tpieces that will be demo testers for a while. Each explosion, gun shot, smash, clatter or pop is felt. As inventive as it is thrilling, these instances are worth the price of admission.

It may seem unfair to point out just how much the loss of Blunt, Denis Villeneuve and Roger Deakins affects the film, but also essential. What made Sicario so impressive were the layers at work in the film. It wasn’t just another standard dark actioner. It had ideas, metaphors and intentions on its mind. Articles are still written on the original, pulling at its various threads, expounding upon what made it a success.

By contrast, Soldado has quiet moments, loud moments and moments where people ramble off something relating to the plot. The three elements clash and clang, each vying for attention. Occasionally when they synch up, it’s something mesmerizing to behold, a ballet of chaotic, messy violence, even if it is just sound and fury and bullet casings signifying nothing. It may not be the cerebral follow up most were hoping for, but it’s definitely more than a passing distraction. 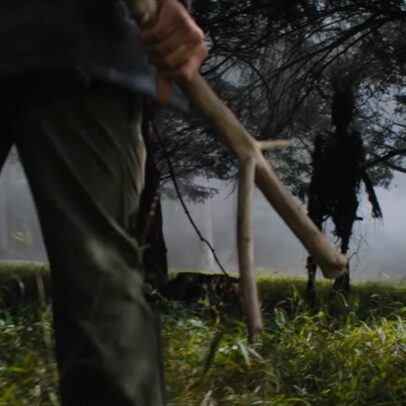