Cinepocalypse: [Review] ‘Attack Of The Demons’ Is A Fantastically Audacious Animated Feature, Marred By Stiff Dialogue

To get an indie film into a festival, it doesn’t have to be the greatest product ever. If it has an intriguing hook and is brimming with creativity, that’s often enough to get it in the door. That kind of break that can lead to a rather long and somewhat prosperous career. Eric Power’s Attack of the Demons fits the mold to a “T”. As cardboard paper animated feature, it bares a passing-resemblance to the early days of South Park. Where it strays from the popular TV show, is in its love of all things horror related. Dripping with enough imagination and gore to make your skin crawl, it’s a film that demands your attention. Even as one element keeps it from becoming an all-timer.

It’s 1994 and the tiny Colorado town of Barrington is gearing up to host its Annual Halloween Festival. So small is the little town, that there’s only one road leading in and out. Relatively cut off thanks to mountains on all sides. Despite this, the local battle of the bands is popular enough to drawn in tourist. Though the last minute addition of a robed cultist to the competition, turns the evening into a living nightmare. A gloriously fun and messy one, at that.

Amid all the excitement, three former classmates run into each other. Kevin (Thomas Petersen) has stayed in the town since high school, living with his grandmother and devouring horror movies voraciously. Jeff (writer Andreas Petersen), a gamer, was sent by his parents to spend the holiday with his uncle. He plans instead to hold up in a motel room and visit the local arcade. Lastly, Natalie (Katie Maguire) has come to town with her pretentious music critic boyfriend, to see her favorite band in concert. As the citizens one by one turn into a variety of grotesque monsters, the trio joins forces, to survive the encroaching chaos.

The cardboard cutout animation is the film’s main selling point and fully delivers. Power may not have a giant team or budget at his disposal, but that doesn’t mean the film is lacking. In fact, Attack of the Demons is endlessly audacious, in its desire to make something big and memorable. Part of what makes the animation style take flight, is a willingness to wear its influences on its sleeve. The works of Fulci, Lamberto Bava, Carpenter and Screaming Mad George are all felt here. All manner of creatures, blood, puss and bile slather the screen, in the most delightful manner possible. It’s truly a glorious sight to behold.

It isn’t just the monsters that take center stage though, as Barrington is filled with all manner of little flourishes. Arcade and handheld video games get special attention, with variations on real world off-shoots. Power treats the audience to a few seconds of each game, just showing how far his eye for detail extends. The score by John Dixon also adds to the over atmosphere, calling to mind the synth work of John Carpenter and Goblin. It’s the bow helping tie everything together. When the mash-up of bits is this good, it’s easy to lose yourself in Attack of the Demons.

Unfortunately, not everything is monsters and goopy goodness. As with most indie projects, there’s something to keep it from going full-on into greatness. Here it comes down to the dialogue. Both the script by Petersen and voice overwork feel forced and unnatural. Characters are stilted, as well as the conversations they carry on. While it could be a stylistic choice, the over reliance on it is sure to test some people’s patience. As a short, the decision be forgivable. As a feature, it’s directing, almost bordering on uncomfortable.

Here’s the thing though: as much as the dialogue is overly grating, the work on display is utterly impressive. To the point where if a blu-ray were put out, featuring an isolated score track, it would be an easy recommendation. With its inclusion, Attack of the Demons is merely a fantastic but trying affair. One whose creativity is held back by truly lackluster dialogue. For those on the fence, it’s still worth a watch. There something for horror fans of all kinds and all ages to find. Even with one glaring misstep, Eric Power has created something really special and really fun, that whizzes by in a quick 74 minutes. Here’s to hoping his next feature isn’t too far off. Maybe next time with a different writer. Just to be safe. 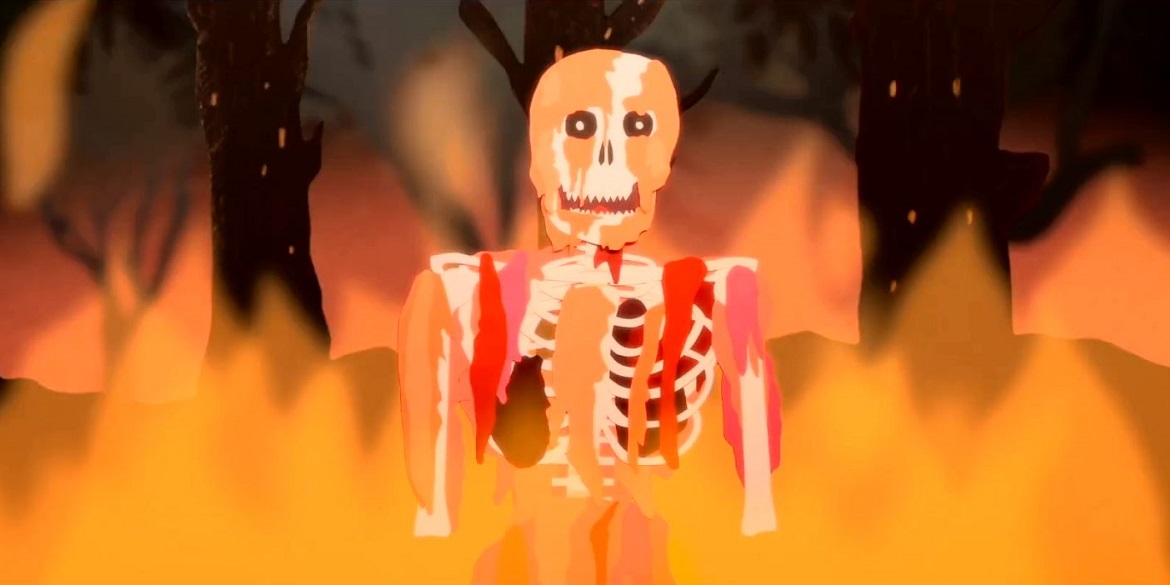 Cinepocalypse: [Review] ‘Attack Of The Demons’ Is A Fantastically Audacious Animated Feature, Marred By Stiff Dialogue
65