In June 2014, the story of Molly Bloom first hit the bookshelves. Molly’s Game: The True Story of the 26-Year-Old Woman Behind the Most Exclusive, High Stakes Underground Poker Game in the World told the tale of a young woman who was once an Olympic hopeful but, through an interesting turn of events, became the mastermind behind an illegal underground high-stakes poker game. Director and writer Aaron Sorkin has now taken the story and turned it into a motion picture starring Jessica Chastain as the lead character of Molly Bloom.

Young Molly Bloom comes from a family of overachievers. Her father, Dr. Larry Bloom (Kevin Costner), is a psychologist and professor at Colorado State University. Her mother is a successful business person while her brother is an Olympic skier and NFL football player. With her father as coach, Molly enters the world of Olympic skiing, eventually ranking third in North America. But after an accident leaves her unable to continue, she turns down a path of questionable decisions, eventually working her way into helping run a high-stakes poker game, something she knows nothing about but clearly has an amazing aptitude. 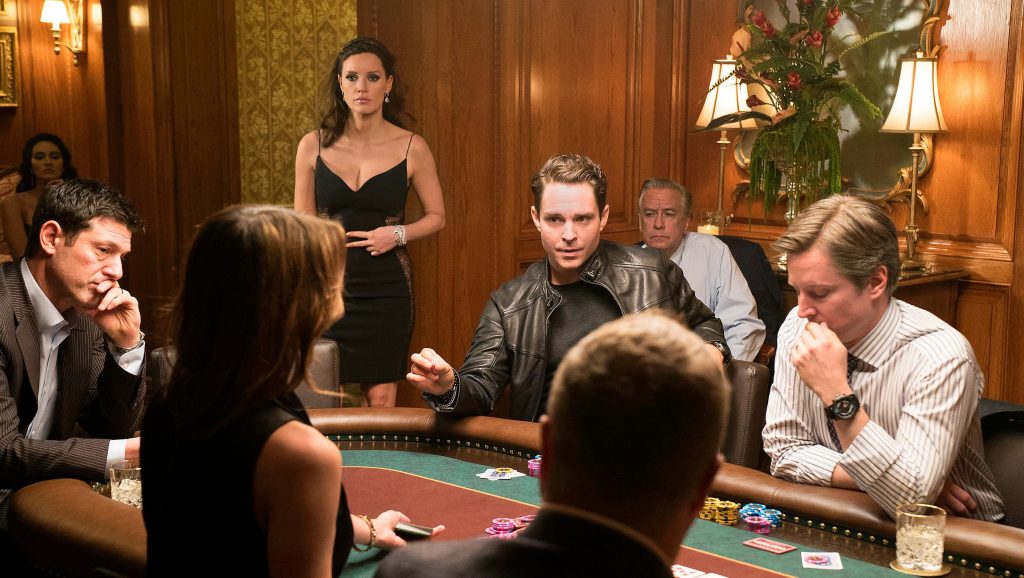 Molly uses her wits to eventually run her own game, paying close attention to every detail possible. But once drugs begin to cloud her judgment, poor decisions eventually lead to a run-in with the United States government, not to mention the Russian mob. Enter her reluctant attorney Charlie Jaffey (marvelously played by Idris Elba), who soon learns that there is much more to Molly than the press would have you believe.

Chastain and Elba carry the film in great fashion as the story unfolds but the unsung hero of the tale is Kevin Costner. For much of the film, I was wondering why an accomplished actor had accepted such a small and, seemingly, unimportant role. That is until the climax of the film begins in the park. Costner delivers a powerful scene that explains much of who Molly is and is the final puzzle piece to her overall character arc. Costner’s days as a leading man may be gone but I believe he’s done some of his better work in these now smaller supporting roles.

Aaron Sorkin has written a few great films, such as A Few Good Men, but his biggest claim to fame so far has been his television series The West Wing. Now, for the first time, he steps on stage and behind the camera with his directorial debut, and what an impressive debut it is. His writing style is often rapid fire, requiring the actors in his productions to be just as quick with the delivery. Elba effortlessly delivers all of his lines while Jessica Chastain succeeds most of the time. She occasionally stumbles but never too far off track. Her voiceovers also help the story move along, only becoming a distraction once or twice.

At over two hours in length, the film also moves along at a fairly steady pace, immersing the viewer into the story as we watch the rise and fall and rise again of Molly Bloom. However, the film does get a little muddy at times with poker terms that won’t necessarily mean something to every viewer. You’ll need to truly understand the game to catch every nuance of the script, which is a flaw that may pull some people out of the moment. Sorkin has written a great script that could have benefitted from another set of more critical eyes to iron out some of these details. That’s a trap others have fallen into before when the writer and the director are one in the same.

Take the time to step up to the table for Molly’s Game as it’s a smart script with an engaging cast. You won’t find any explosions or car chases here but the change of pace is well received.