Review: ‘Aquaman’ Drowns Under Its Own Weight

Watching Aquaman, DC’s latest attempt to Marvel-ize its cinematic universe, was an exhausting experience that left me dead inside.  Everything for which I’m about to criticize the movie would have been forgivable had I felt the slightest bit of joy as a result.  I’m hard pressed to recall a film that accomplished so little with so much.  It pains me to say that not only did I not enjoy it, I also actively disliked it.

Aquaman is not as inconsistently bad as Suicide Squad; however, its non-stop assault on the senses (and intelligence) is just as offensive.  I loathe to discredit a movie for having too much story, but here, the action can hardly keep up with it.  It’s as if there was even a momentary pause, the entire plot would collapse under its own weight.  By the way, when I say, “action,” I mean fighting and explosions.  There’s no suspense or thrills otherwise.

Let’s start with the half-breed mongrel himself, Arthur Curry (aka Aquaman), played by Jason Momoa.  During his first appearance on screen, he stands with his back to the camera, bows his head and snaps it back to toss his wet locks of wavy hair behind him.  Then he turns his head slowly over his shoulder as the camera zooms in.  Wow, that demonstrates some self-importance, as well as indulgent filmmaking.  Once is OK, but not every time he makes an entrance.

I get it; this is the Modern Age version of Aquaman, the one more likely to have a hook for a hand than an octopus for a sidekick.  While the movie depicts his birth origin, son of a human lighthouse keeper, Tom Curry (Temuera Morrison) and the queen of Atlantis, Atlanna (Nicole Kidman), it quickly shifts focus to his reluctant struggle to reclaim the throne from his evil half-brother, Orm (Patrick Wilson).

The screenplay by David Leslie Johnson-McGoldrick and Will Beall wants to use the back story as emotional glue for the plot, but it doesn’t stick.  It’s simultaneously unoriginal and heavy-handed.  More importantly, it doesn’t ring true.  Back to the character of Aquaman, Momoa isn’t a good enough actor to successfully pull it off.  The only thing he’s good at pulling off is his shirt, and there’s no doubt that he’s got a body built for the job.

In most respects, Aquaman isn’t really a superhero movie at all.  Aquaman (the character) has no secret identity, so repeated news reports speculating the existence of the character, who was already made a public figure in Justice League, conflicts with scenes of him downing some brews with the locals at a neighborhood pub.  While there is a threat above land, the movie consists mostly of family drama and political intrigue under water.

Likewise, the undersea settings, several kingdoms including Atlantis, make Aquaman more an out of this world fantasy than an earthbound adventure.  In this respect, it may as well take place in space on some faraway world.  That’s interesting, because a lot of the movie reminded me of a Star Wars film… and not one of the “good” ones; instead, one of the prequels, particularly Attack of the Clones.

It also reminds me a lot of Green Lantern.  If it says anything about Aquaman, Green Lantern is a masterpiece when compared to it.  Part of the reason may be that Ryan Reynolds’s human Hal Jordan character was an alter ego to his superhero, Green Lantern.  The dual personas within one human is a staple of comic books and comic book movies.  Aquaman relies on only one persona, and with Momoa, it’s actually only half of one.

Aquaman is full of contradictions.  For example, I could swear part of Orm’s goal is to unite three kingdoms.  We see more than that, though, each one characterized by… ways different groups of people evolved after the technological marvel of a city, Wakanda Atlantis, sank into the ocean?  That’s a subject that swam by so fast, I couldn’t grasp it.  Also, the main characters can breathe on land, yet supporting cast members have to wear water suits or they die gasping for air.

Part of the convoluted plot has Aquaman and Mera (Amber Heard) going on Indiana Jones-like expeditions to retrieve a powerful trident that will help him reclaim the throne.  One of these mini-adventures takes place in… the Sahara.  The filmmakers took a man with “aqua” in his name and dropped him (literally) into the desert.  Even if it’s an attempt to prove he’s a hero out of the water, it just seems dumb to me.  Instead, take better advantage of where he works best.

So let’s talk about the water.  It’s a world so teeming with fast-moving activity that an aspect of the movie that should be unforgettable, ends up being unmemorable.  I can’t claim it utilizes “bad CGI;” however, I can claim that the sheer nature of what’s happening with live action actors and characters is so impossible, that it doesn’t seem real.  I know, I know… you have to suspend disbelief, but Aquaman may just as well have been a fully-animated motion picture.

I haven’t mentioned the hopes for Aquaman that director James Wan brought for me.  I don’t feel like I can credit him entirely for this mess.  He makes an admirable attempt to string all the pieces together; however, I can’t fight the feeling that while he was directing scenes with real people, someone else in one of a number of different special effects houses, was creating disparate action scenes that would overpower his efforts.

I have no particular loyalty to the character of Aquaman or his comic book adventures.  I don’t feel disappointed in or betrayed by a motion picture adaptation.  I wonder if people who are fans will be so thrilled to see a movie that was once a running joke on Entourage become a reality, that they mistake it for a good movie.  (I understand; I was so thrilled to have Dark Shadows return 46-years later that I didn’t hate the Tim Burton remake.)  This is not a good movie.

Ultimately, I feel that the DC movies, in their continuing effort to stop doing what makes them unique so they make more money, are still struggling to find a voice.  Aquaman uncomfortably straddles the line between light and dark that Marvel walks with such agility.  Unfortunately, this means that Wonder Woman may have been a fluke.  At this point, I’m not sure I trust DC to not screw up the sequel to their biggest hit. 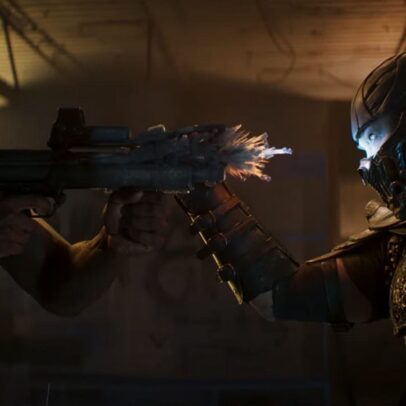