The official synopsis on Arrow’s press release says, “Donnie is a troubled high school student: in therapy, prone to sleepwalking and in possession of an imaginary friend, a six-foot rabbit named Frank, who tells him the world is going to end in 28 days, 6 hours, 42 minutes, and 12 seconds. During that time he will navigate teenage life, narrowly avoid death in the form of a falling jet engine, follow Frank’s maladjusted instructions and try to maintain the space-time continuum.”

Donnie Darko is about so much more than that.  With each viewing, I take something new from it.  Watching it recently, the political subtext struck a chord, probably because it reminds me our recent 2016 election.  In 1988, when the movie takes place, an eight-year presidency (Ronald Reagan) was ending and the Democratic Party was ultimately unsuccessful with its candidate, Michael Dukakis.

I also forgot the movie has such a religious undercurrent. Donnie (Jake Gyllenhaal) is afraid of dying alone, like his dog under the porch.  When his therapist, Dr. Lilian Thurman (Katharine Ross) asks him if he feels alone now, he replies, “I’d like to believe that I’m not, but there’s no proof… I don’t debate it anymore.”  And when she asks if he thinks God is absurd, he says, “If you die alone, yes.”

Donnie Darko is a remarkable achievement for any director, much less one for someone who had just graduated from film school.  In a phone interview with 41-year old Richard Kelly, I asked him to talk about the process of writing the movie.  He joked that it took him 23 years to write, then 28 days to type.  It was the first screenplay he’d ever written.  He knew it was something he needed to do, but he didn’t want it to bomb, so he waited as long as he could to do it.

Look at the trivia page on IMDb for Donnie Darko and the intricate details in the story are astounding.  There are more Easter eggs in it than in a child’s basket on a spring time Sunday morning!  For example, early in the movie, Donnie’s mother is reading Stephen King’s It, which features a clown.  Near the end of the movie, the passenger in a major character’s car is dressed like a clown.  Is this merely a coincidence?  I asked Kelly how many of these details were intentional. 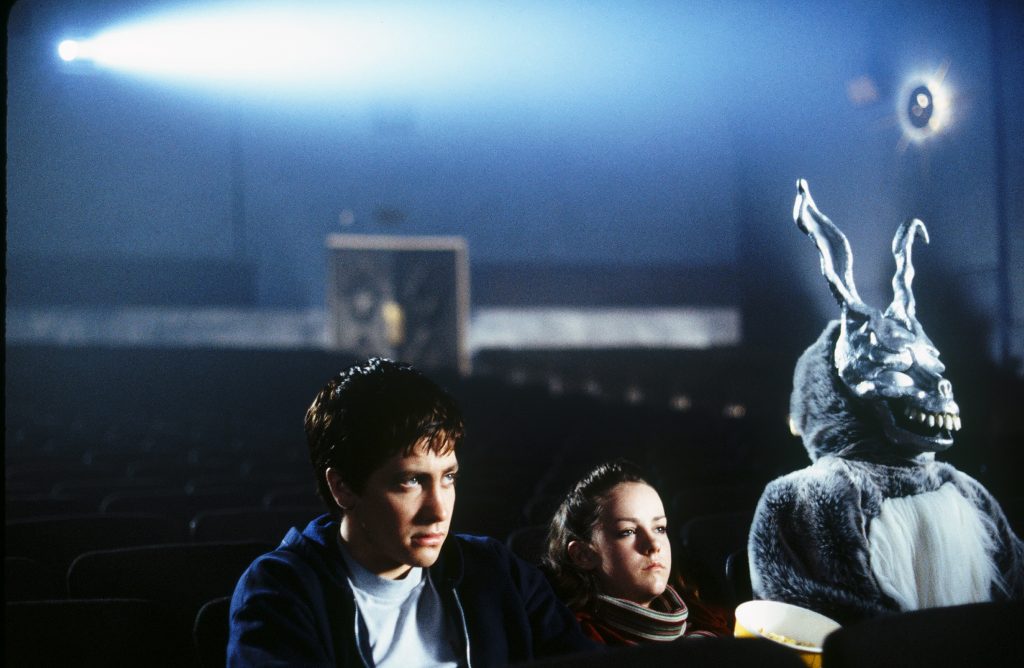 Surprisingly, he claims that many of them were purely coincidental. It was a “visual screenplay,” and some of the details were included in the script.  However, the fact that the numbers in the countdown for the end of the world (28 days, 6 hours, 42 minutes, and 12 seconds) total 88, is unintended.  (The movie takes place in 1988 and 88 mph is how fast the DeLorean in Back to the Future must go to travel through time.)

How did he assemble the amazing cast that also includes Mary McDonnell, Patrick Swayze, Jena Malone, Seth Rogan, Noah Wyle, and Drew Barrymore? Kelly credits actor Jason Schwartzman for his early interest in the project.  Due to scheduling conflicts, he couldn’t ultimately be in the film.  However, by then he had attracted attention from Barrymore, who was instrumental in getting it produced.

I asked Kelly if there was one actor at the time whom he felt had to be in the movie. He said, yes, Katharine Ross.  At the time, the 61-year old actress had not been terribly active, but he was invited to her house and allowed the opportunity to tell her about Donnie Darko.  She was kind and gracious, and obviously agreed to take the part.  (She’s terrific in it.)

I also asked him about the iconic soundtrack that features 80’s artists such as The Church and Echo & the Bunnymen. (Bunny?)  He said three or four songs that he wanted to use were written into the script.  He was unable to obtain the rights to at least one of them (“West End Girls” by Pet Shop Boys).  Because of that, though, he had the opportunity, through his music supervisors, to be introduced to Joy Division.

Although the locations in the movie for some of the songs were changed in the 2004 “director’s cut,” they’re perfect in the original. From the beginning (“Killing Moon,” Echo & the Bunnymen) as Donnie rides his bicycle in his pajamas, to the end (the cover of Tears for Fears’ “Mad World,” Gary Jules), the music is vital to the mood of the movie.  The score by Michael Andrews is also excellent and appropriate.

Finally, I asked Kelly about his comment during a January interview when he said he has an idea for another movie set in the Donnie Darko universe.  He confirmed that it’s true, but said a lot of stars have to align for it to actually happen.  He wants it to be something new, while respecting the original.  Plus, he doesn’t own the rights to Donnie Darko.  I wanted to tell him that I don’t think that matters.  I’m sure it’s a movie people will want to see.

If you’re questioning the need to buy another version of the movie, just look at the features included in Arrow’s limited edition: