Before Kirk, Spock and the Enterprise there was Discovery. Now, one of the most iconic and influential global franchises returns to television with STAR TREK: DISCOVERY.

There is a lot to unwrap in the official trailer drop but some of the things that stand out to us the most are a look at the new fleet, uniforms, crew members, Klingons and even Spock’s father, Sarek! This is our first look of footage of any kind since we first reported about it at San Diego Comic-Con last Summer.

“The launch of the new ‘Star Trek’ will truly be a global television event,” said Armando Nuñez, President and CEO, CBS Studios International.

The new STAR TREK marks the first original series developed for U.S. distribution on CBS All Access, which provides viewers thousands of episodes of CBS’s current and past seasons on demand, plus the ability to stream their local CBS Television station live for $5.99 per month.

Alex Kurtzman and Bryan Fuller are co-creators and executive producers for the new “Star Trek,” based on Gene Roddenberry’s original series. Fuller launched his career writing for “Star Trek: Deep Space Nine” and “Star Trek: Voyager.” Kurtzman is co-writer and producer of the blockbuster films “Star Trek” and “Star Trek Into Darkness.”

The CBS All Access Original Series arrives this Fall. 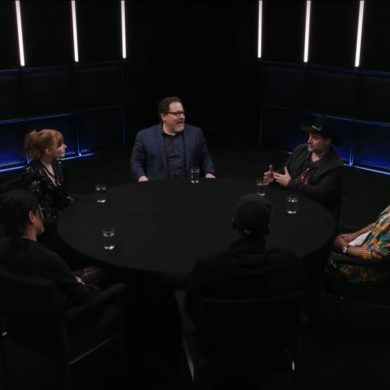 Witness The Exciting Full Trailer For The ‘Disney Gallery: The Mandalorian’ Docuseries