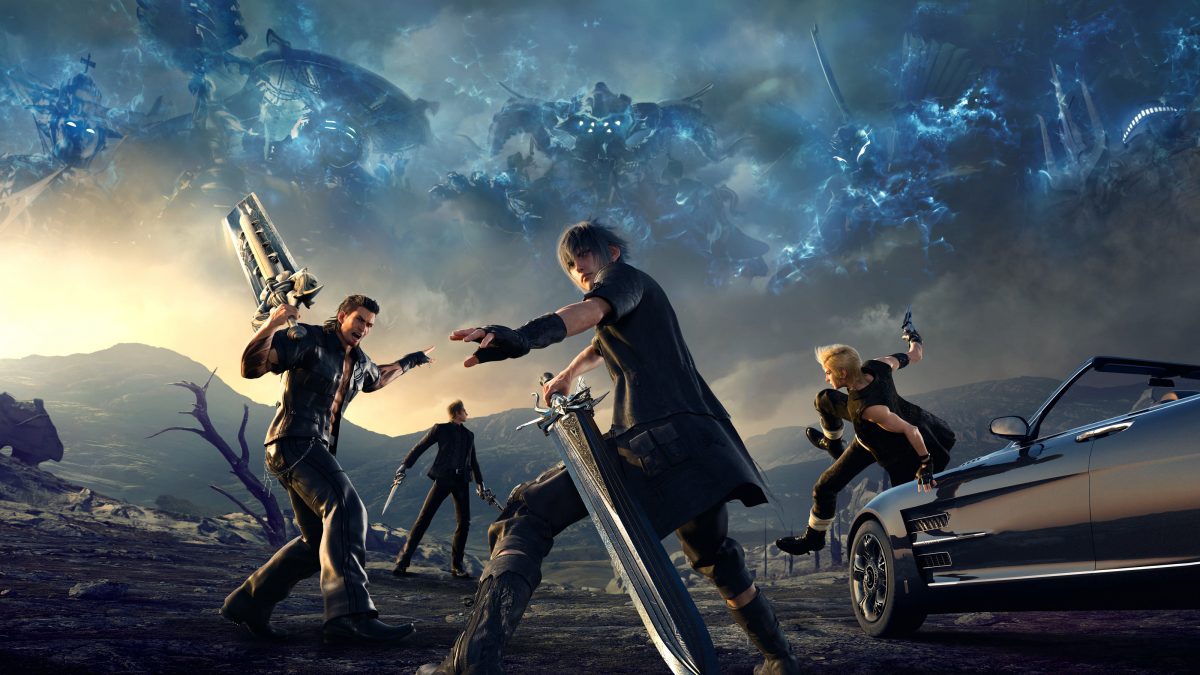 I’m ashamed to admit this, but I had never played a single Final Fantasy game until last year. I have watched a play through of Final Fantasy VII, but me personally playing, it wasn’t until I got my hands on Final Fantasy XV; THAT was my first. It was a fluke really, a consequence of Black Friday fever and it has easily come to be one of my favorite games of all time and the good news and content just keeps coming from Square Enix.

For those of you who haven’t played Final Fantasy XV, it follows Prince Noctis who is on a journey to meet up with his oracle fiancée, LunaFreya. He is accompanied on this road trip by his royal posse: Gladiolus (his protector), Ignis (his advisor) and Prompto (his friend and, I suppose, documentarian). At the start of their journey, Noctis learns that his home of Insomnia has been attacked and darkness is beginning to take over and in effect daemons are escaping and attacking.

While the premise in that sense seems simple, this story is intricate and wonderful. While the game got a lot of flack initially for its bro-heavy story-line, for this installment in the series, it is necessary. You become so attached to the characters, your heart breaks for them through the journey. The dialogue and interaction between them is hilarious and realistic and I can’t recommend this game enough.

For fans of the game, the excitement is already high for the release of the Royal Edition on March 6th. With that copy, you can explore parts of the sea around Cape Caem and Altissia, play all three extra episodes based on Noctis’s companions, there’s a new dungeon to explore, the ability to explore Insomnia is added, new gear and bosses and a first-person mode are available and more. If that wasn’t exciting enough, according to ComicBook.com, there is much more to come.

The director of Final Fantasy XV, Hajime Tabata, let us fans in during two interviews with Famitsu and 4Gamer on the fact that we can expect FOUR MORE DLC episodes by 2019. One of the most exciting things, in my opinion, is “Episode Ardyn.” The ability to play that fashionable, powerful jerk will give new insight on the story and was the most requested episode among the fans.

The goal, according to Tabata, is to use this additional content to help complete the Final Fantasy XV universe. Hopefully, this will help fill any plot holes or missed storytelling opportunities that the main game missed.

Moreover, we may get the chance to play as LunaFreya in an “Episode Luna.” Anyone who’s played knows how amazing that will be. She may be one of the strongest minded characters in the game and it will be nice to see what she went through during the story that we, as players, couldn’t have seen. There is also the plan of an updated road map by 2019, as well.

I am so excited for this content and for the upcoming Royal Pack. With the game turning two this year, Square Enix is kicking it up a notch for a game that’s already in its toddler years. Look out for a Royal Pack DLC review in the future. Until then, “Walk tall my friends.”

Review: The Power of Grief & Guilt Are Explored In The Deliriously Beautiful ‘Foxtrot’