‘Tubi Or Not To Be’ Day 5: Meagan Navarro On ‘Attack Of The Mushroom People’ & Rob Dean On ‘Incident At Raven’s Gate’ 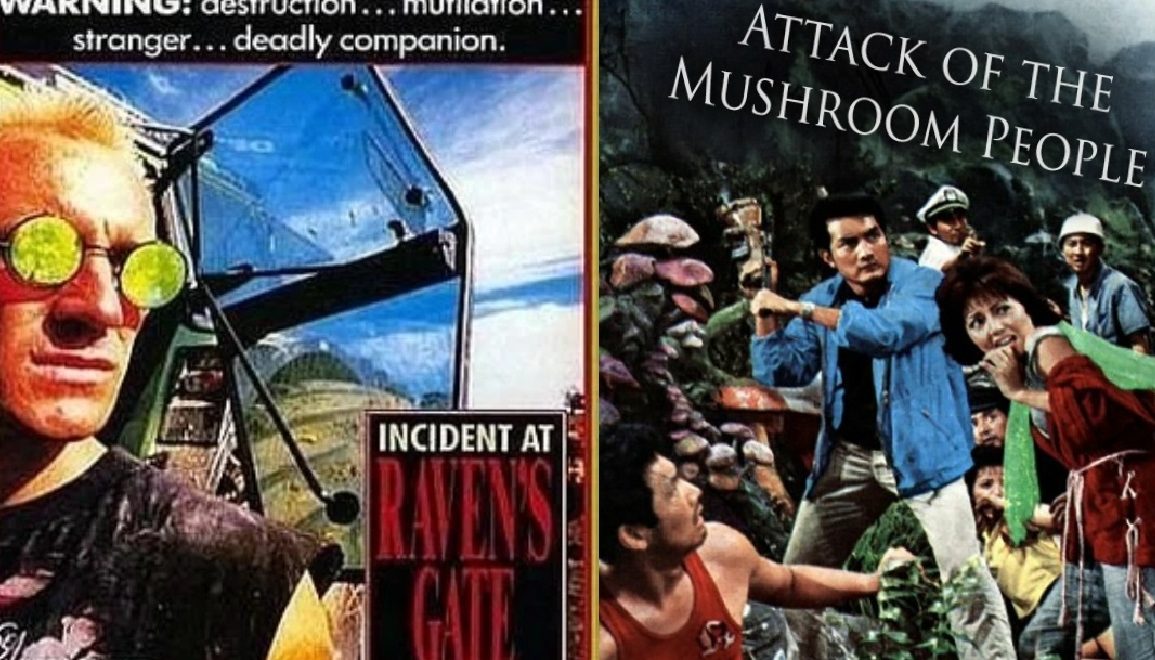 Attack Of The Mushroom People

Based on the film’s cover and title, Attack of the Mushroom People suggests a bizarre viewing experience. Considering that Ishirō Honda directs it, the mind behind prominent kaiju films Godzilla, Rodan, Destroy All Monsters, and more, well, the likelihood that this would offer up the same sort of zany- possibly schlocky- fun was a safe bet. Straightaway, though, this 1963 film defied all expectations. Toho’s surprising hidden gem is a wealth of dark, atmospheric slow-burn horror that would make an excellent companion to Invasion of the Body Snatchers.

Released initially as Matango, this condensed American dub sees a group of passengers and crew aboard a yacht on a day trip get capsized by unpredictable weather. They wind up on a deserted island that’s scarce in food resources, save for mysterious mushrooms, and a shipwreck onshore containing remnants of radioactive testing. The castaways grow paranoid and hostile as rations are depleted, and more of them develop uncontrollable cravings for the mushrooms. They don’t realize until it’s too late that the mushrooms transform them into fungal humanoid creatures.

The foggy island makes for an effectively eerie setting, and much of the narrative focuses on the cabin fever that sets in and ensuing body horror. This movie isn’t the all-out creature feature you’d expect, though there is a little bit of that, too. There’s a lot of subtext bubbling under the surface. The victims succumbing to the strange effects of the mushrooms could be perceived as victims of atomic bombings, especially in context with the shipwreck’s experiments. More noticeable is the way the film depicts drug addiction. Meaning Attack of the Mushroom People is a far moodier, reflective, and more serious movie than anticipated. An outlier in the director’s oeuvre, this is an accomplished piece of disturbing horror that deserves far more attention than it’s gotten. No thanks to the funny Americanized title, anyway.  Definitely Tubi this one.

Megean Navarro
Twitter: @hauntedmeg
Lead Contributor/Critic for Bloody Disgusting
Attack of the Mushroom People can be viewed here, on Tubi.

Rolf de Heer’s 1988 film Incident At Raven’s Gate is an incredibly frustrating watch—not because it is bad or offensive, but because there is so much good within it that is constantly obscured. Ostensibly (though unofficially) H.P. Lovecraft’s “The Colour Out Of Space” but moved to the Australian outback of an ‘80s Ozploitation flick, the movie (released states side as Encounter At Raven’s Gate) concerns an ex-con, his brother (a farmer with dreams of hydroponics), his sister-in-law, and a few other locals that start experiencing weird phenomena after some locals in another house get irradiated by an otherworldly light. Sheep start dying, people turn cruel, water dries up, dogs turn on their masters, and other signs of space madness infecting the local populace. It’s not a bad story, and there’s some strong visuals as well as injection of unseemly atmosphere into the proceedings.

The problem with Incident is that it undercuts itself at every time—the story cuts back and forth between the past (with the ex-con) and the present with a cop trying to assist a covert government type (played by Terry Camilleri—“Napoleon” in Bill & Ted’s Excellent Adventure). This kills a ton of momentum and even some suspense. When there are engaging and creepy scenes, there’s awful editing, awkward blocking, and poor camerawork that deprives it of being as effective as possible. Or, when showing that someone has been “possessed” by this extraterrestrial presence, their voice becomes high-pitched. It wasn’t scary with The Judge in Who Framed Roger Rabbit but it is just as cartoonish here. With the small cast and minimal events, it should be a chance for characters to shine or dialogue to really sing—but there isn’t a ton established. Viewers understand the desires and backstories of maybe two characters, one of which disappears for over half the film.

There are cool shots using fluorescents and musty atmosphere that presage Tilman Singer’s Luz. The mounting paranoia was echoed in Richard Stanley’s own adaptation of the same source material, Color Out Of Space. Film lovers could pick out inventive sequences and striking frames to admire from Incident At Raven’s Gate—but would find plenty more moments of dull inertia.

There’s a lot of good ideas, strong intentions, and nice styling inside de Heer’s film, if only he could have gotten out of his own way long enough to let those moments shine brighter.

Incident at Raven’s Gate can be found here. Be sure to watch both films!