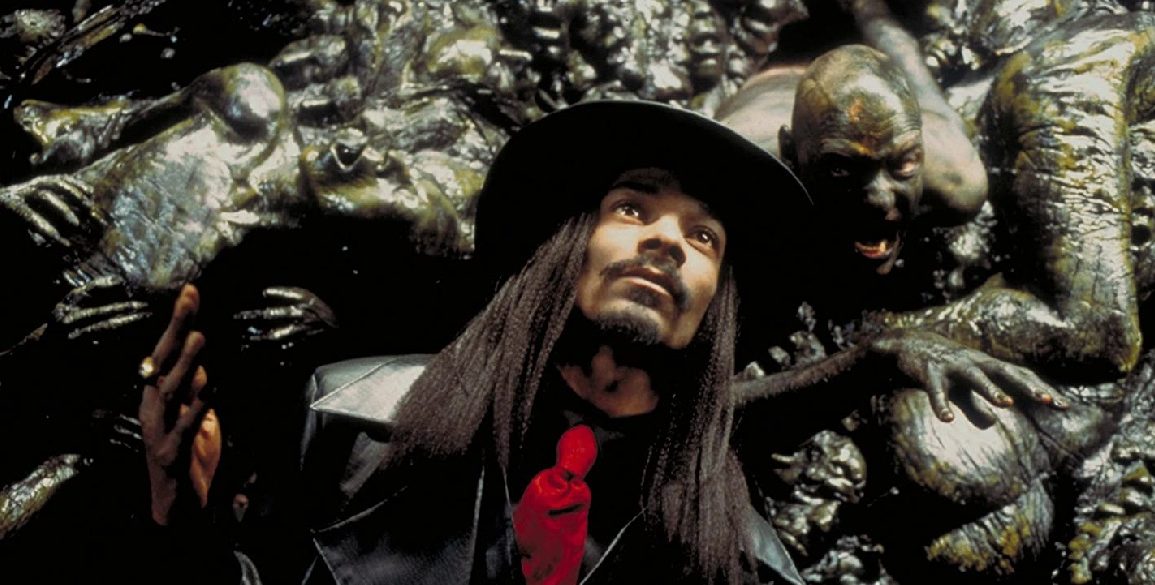 Released nearly a month and a half after the attacks on the World Trade Center, director Ernest Dickerson’s neon cascaded throwback to 70’s blaxsploitation and horror did not fare well at the box office. Rattling around on a $16 million dollar budget – which to put things into perspective, Demon Knight, Dickerson’s electric funhouse of terror, rose from the grave on an estimated budget of $13 million six years earlier – Bones recouped just about half that worldwide. Despite the box-office gross dropping 30.7% following the attacks, shifting blame entirely on the shuffling interest of movie-goers would be a bit of an error, as Dark Castle’s remake of Thirteen Ghosts opened the same day to a little over $15 million in over three times the amount of theaters. It would seem like audiences just weren’t ready for the cinematographer turned director’s earnest blend of JD’s Revenge meets Hellraiser, which is a damn shame since this melting pot of viscous gore meets ingenious practical effects is precisely what the horror genre is all about.

Telling the tale of Jimmy Bones (Snoop Dogg), a respected member of the community who is brutally murdered and buried within the basement of his own establishment at the hands of a cop (Michael Weiss) and a drug pusher (Ricky Harris) in 1979, Bones opens in present day with a group of friends who have recently purchased the very dilapidated yet not very abandoned building in order to renovate it into a nightclub. As our four friends Patrick (Khali Kain), his brother Bill (Merwin Mondesir), their step-sister Tia (Katherine Isabelle) and Maurice (Sean Amsing) begin revamping the building turned tomb, the spirit of Bones (trapped within the body of a dog with blood-red eyes) begins feasting on their fear, turning their dream project into a waking nightmare.

Premiering just six days before All Hallow’s Eve to the number of theaters that would equate to the amount of Milk-Duds in 42 mini-boxes (847, just to be clear), Bones took 10th at the box office behind Corky Romano‘s 3rd week of existing without a funny bone. Its release could be blamed on Dickerson’s 1996 buddy-cop romp Bulletproof, which managed to catch every shot fired from critics loaded gun while failing to earn back its budget the year after Tales from the Crypt: Demon Knight scared up a modest $21.1 million.

Or it could be blamed on Bones being a massive vehicle for Snoop Dogg, who had up to this point only starred as the lead in two films, 2000’s urban tale The Wrecking Crew alongside Ice-T, and the Master P directed 2000’s rags-to-riches rap fable Hot Boyz, not to be confused with Lil Wayne’s group of the same name. From the poster emblazoned with the rappers ruby cut contours splashed in red to the soundtrack that contains seven tracks performed by Snoop – who also produced and executive produced the album that reached #4 on the Tops Soundtrack chart – it’s nearly impossible not to think of Bones as that Hollywood launch-pad the same way Boyz n the Hood established Ice Cube as not just a member of N.W.A. a decade earlier.

Ernest Dickerson recently spoke remotely with AFI Conservatory Fellows on a wide range of topics, one of them being his casting of Tupac Shakur in Juice, the directors’ hooded coming of age debut, and how Shakur captured the pain of his character; a flicker of anguish that only a director with the eye of a cinematographer can capture. It’s this flicker that Dickerson must have seen glint in the eyes of hip-hop titan turned actor Snoop Dogg, who reflects genuine pang in a soul tormented by betrayal after Bones refuses to hit the drug game, one that plays allegorical to the crack epidemic of the early ’80’s. There’s a softness to Snoops delivery that goes beyond the THChill lilt of a rapper who rounds corners with the ease of vapor, proving that his on-screen presence isn’t limited to a rapist parole in Baby Boy or a drug peddling snitch in Training Day; a film that held the number one spot at the box-office for two weeks in a row in early October of the same year.

While its marketing puff-puff passes on using Ernest Dickerson’s name – Snoop Dogg and his chronic cinematic presence is heavily toked – or even mention Demon Knight, the hellishly phantasmagorical debut of the Tales from the Crypt movie line-up that seemingly ended with Bordello of Blood one year later, any horror fan can tell that Dickerson’s fingerprints are all over the marrow of this throwback. Dizzying zooms, pulsating viridescent glows and tilted high angle shots are all present and accounted for, and while Dickerson idolizes another cinematographer turned director, a little known Italian horror maestro by the name of Bava, he told Shadow and Act back in April of 2017 about shooting and directing a film that, “it’s not something that I’d do again because it was just too much work.” Here, Dickerson brought on cinematographer Flavio Labiano to establish a wide lens that would later be used to capture sheer terror in the shark infested slasher, The Shallows.

Further speaking with Shadow and Act, Dickerson discusses the future of filmmaking and the digital take-over, stating that he wishes he “could do both” in regards to shooting film and digital, and that sentiment carries through in his aesthetic choice of using both practical effects and CGI. In Demon Knight, FX warlock Todd Masters brought demonic possession to tangible life, infusing the dripping and spewing power of practical effects through hordes of gaunt, grimy and gesticulating hellspawns while integrating small doses of CGI here and there. With Bones, make-up effects designer Tony Gardner (The Blob) creates a smorgasbord of ingenious old school effects, the grandest of them being a massive blackened wall of contoured limbs that amass within one of the bedrooms as Bill tunes out with some Cypress Hill. Bodies writhe and wail against each other as gelatinous ooze congeals around them, their anguished faces distorted from years of nightmarish entombment. All of this could have been sloppily thrown together, yet Dickerson’s affection for old-school effects and Gardner’s tenacity for bringing such macabre visions to life creates one of the most unsung set-pieces in horror history.

Anchoring the FX work is a dynamic between four friends that’s kicked up from the streets and constructed into something that feels, for lack of a better term, actually bulletproof. No unnecessary bickering to create tension as cheap as a dime-store Halloween mask, just four souls looking to renovate and remix their lives doing what they love. Rapper turned actor and Dickerson alum Khalil Kain – previously portraying Raheem in Juice – transcends your average teen-in-a-horror film exploits, while Merwin Mondesir and Katharine Isabelle, playing Bill and step-sister Tia, feel tethered through this nuclear family that has each other’s back. Even Sean Amsing’s comic relief DJ Maurice doesn’t snap the needle spinning one too many jokes. It’s refreshing to feel thick dread permeate throughout the film, brewed through a concoction of genuine attachment to the film’s characters, which so often feels lost in an attempt to give audiences someone to root against.

This is where writers Adam Simon and Tim Metcalfe (A Haunting in Connecticut) skip a beat. Jimmy Bones, despite possessing the body of a dog with a thirst for blood, is a truly sympathetic character who ends up trudging through the muck and mire of villainy. He’s heralded as a pillar of the community, who detests drugs and the encroaching game that seems to be pushing into the families that reside in the neighborhood. He is, despite the stereotype associated with cool cats who strut with a cane and two women dangling off their shoulders, a complete contradiction, instead extending an arm to one woman, Pearl (Pam Grier), who he adorns with affection.

Through hazy gold-tinged flashbacks – Dickerson paying respect to the blaxploitation genre – we see this luminary be struck down on his own turf for rejecting drugs from becoming a cornerstone to every nutritious breakfast. Bones is, despite black actors being pigeonholed as gang members, drug dealers, and paroles, a beacon of hope for the black community, and in the face of a white cop, is gunned down and repeatedly stabbed. Which is why it’s so frustrating that his inevitable resurrection – a marvel of stop motion effects that pay homage to Franks return in Hellraiser – doesn’t just bring forth revenge on those who wronged him, but their loved ones who just so happen to awaken his spirit trying to bring their dreams to a rundown and forgotten community. It’s unfortunate, because while Simon and Metcalfe exploit the genre, they also exploit their characters’ sympathy, and it feels like a significant fracture in an otherwise enjoyably nightmarish bag of bones.

Thanks in large-part to Scream Factory giving Bones the proper treatment with a Blu-Ray release that’s chock full of new supplements – an interview with Ernest Dickerson, as well as new interviews with Adam Simon, Flavio Labiano and Tony Gardner – this unsung supernatural blaxploitation film from an equally unsung director can finally receive appraisal from horror fans. Because despite an uneven arch for its titular ghost-Dogg, Bones remains a glorious funhouse of early 2000’s supernatural horror, one that’s anchored by ghastly effects that champion the heyday of horror while conjuring up a refreshing black icon that the genre (and world) could really use right now.

Bones is available here, on Tubi.