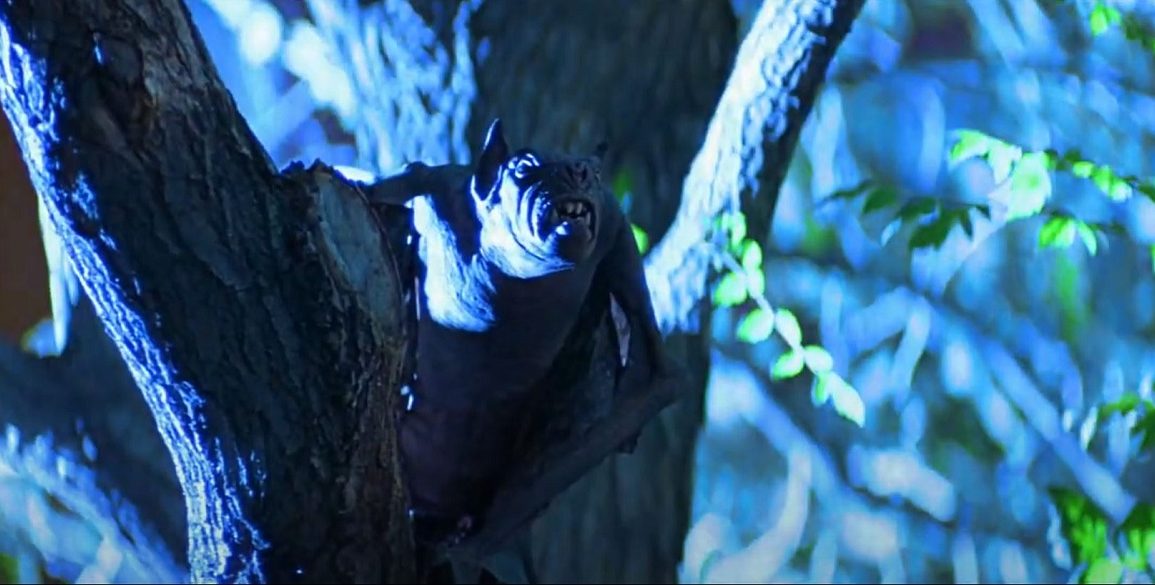 For this series, I was asked to write about a horror film I have never seen and I decided this was the perfect time to catch up on a film that somehow flew under my radar (HA!) when it was released in 1999 – Bats.  Starring Lou Diamond Phillips, Dina Meyer, Bob Gunton, Carlos Jacott and Leon, the film is centered around the small town of Gallup, Texas where a swarm of genetically mutated bats have been terrorizing and slaughtering local residents. As the attacks get more pervasive, it’s up to a chiropterologist and the local sheriff to put a stop to these murderous monsters before it’s too late.

So does Bats fly high as an inventive creature feature or does the film just barely wing it? I’m definitely leaning closer to it being a rather solid creature feature that doesn’t necessarily bring anything new to the table, but it has some engaging performances from both Phillips and Meyers, who make a heckuva onscreen duo here, and I did go a little batty over the practical versions of the titular creatures, too (more on that later). So, all in all, Bats may not be reinventing the wheel here, but there’s still quite a bit about the film that I enjoyed as a whole.

I think the biggest surprise for me when it comes to Bats is that I went into it thinking I was getting something more akin to a SyFy Original (not that there’s anything wrong with them – they can be fun!), but the film feels more like a mash up of Tremors, Mimic and Gremlins, just a little bit nastier when it comes to the kills (there were some surprisingly brutal moments). It doesn’t quite have the charm of Tremors or Gremlins and it’s not nearly as serious-minded as Mimic, so Bats lands in this weird territory where it takes itself a bit too seriously at times, just not serious enough, and it’s that sense of tonal indecision that keeps Bats from soaring nearly as high as it possibly could have.

The story behind Bats is almost more interesting than the film itself, not that I didn’t find the movie interesting or anything. But the movie was shot in the summer of 1999, and was playing in theaters that October, making it one of the fastest produced theatrical films ever to get a wide release (even more impressive is the fact that it was shot on 35mm, too, which often takes extra time for editors and filmmakers to contend with). So, that in itself is pretty darn impressive.

Another remarkable aspect to Bats are all the practical bat creatures that were created and puppeteered by the team from K.N.B EFX. Yeah, Bats features some rather goofy VFX shots of the swarms flying about (they have aged about as well as most films from that era though, so it’s not really a knock to anyone’s work on the movie), but for all the close-up shots, we got lots of little nibbling critters, and I think the best part about them is that they have a bit of an attitude to them. Like, for real. Watch the movie and watch those little bat faces. These bats are there to f—k some stuff up, and it’s reflected in their design. And I will always be a fan of little details like that because they add so much to my overall enjoyment as both a film fan and an FX fan as well.

Oh and the nod to Nosferatu on the town’s movie theater marquee was just *chef’s kiss.*

If you somehow had written Bats off as another schlocky creatures run amok endeavor, then maybe it’s time to give this one a watch and see if you end up as pleasantly surprised as I was. It may be a little uneven at times, but when the bat hits the fan (don’t worry, I’m almost done with all my puns here), that’s when Bats hits its stride, and I think both Phillips and Meyers (who was like my favorite “tough chick” of the ‘90s) are really damn good together here. Also, the movie has some great production design to it, and a few fang-tastic kills that should leave genre fans happy, and I’m glad I finally took the time to check it out.

Bats can be viewed here, on Tubi.