It was in late 1968 that the Guardians of the Galaxy first graced a comic book in Marvel Super Heroes #18 (dated January 1969). The team was very different indeed with only the familiar blue-skinned Yondu being recognizable by modern audiences. They would have random appearances over the years, always on the fringe of the Marvel Universe. So when Marvel chose to have another version of the Guardians headline their own movie in 2014, it was surprising when the movie became a huge hit and a favorite amongst all of the films released so far. But can this reluctant band of misfits strike gold a second time?

All of the familiar faces are back for Guardians of the Galaxy Vol. 2 with Chris Pratt headlining the cast as Peter Quill aka Star-Lord. Zoe Saldana, fresh off her third go-around last summer in the Star Trek universe, returns as Gamora, the object of Peter’s unrequited love. Dave Bautista turns in a hilarious performance as Drax while Vin Diesel and Bradley Cooper once again provide the voices for Groot and Rocket. Of course, Michael Rooker returns as Yondu while Karen Gillan gives us a different take on the villainous Nebula. And two Hollywood legends, Kurt Russell and Sylvester Stallone enter the Marvel Universe as Ego and Stakar Ogord aka Starhawk. 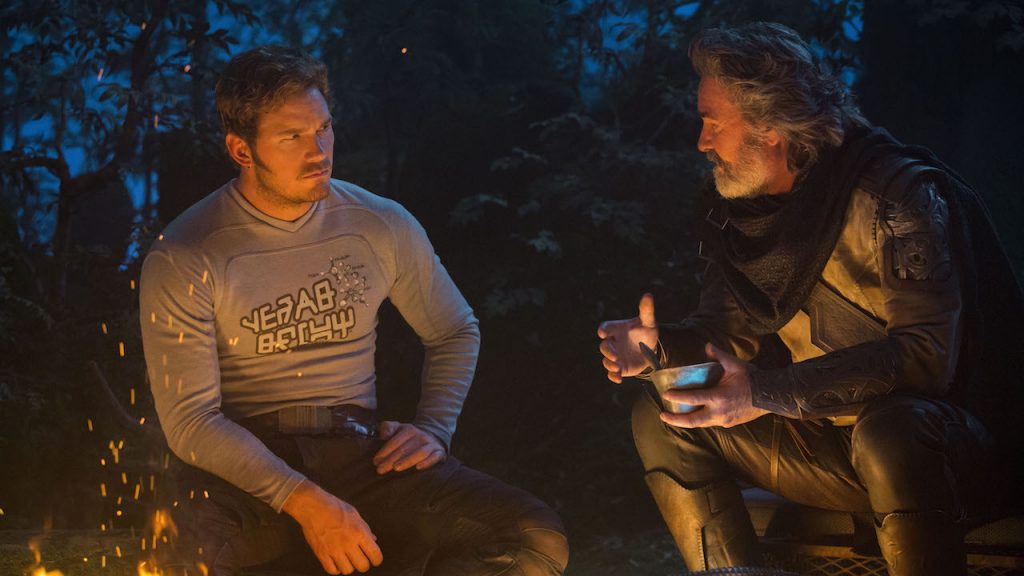 With a full cast, it’s tough to spread around enough for everyone to do, especially when the movie centers mostly on the characters of Peter and Ego. But director James Gunn does well in spreading the plot around for the most part. As our movie begins, we catch our first glimpse of Ego (a convincingly de-aged Kurt Russell thanks to make-up and CGI) and Peter’s mother via a flashback sequence. It sets the stage for a big plot development later on in the film. Flash forward to the Guardians protecting a group of energy batteries, owned by the Sovereigns, from an inter-dimensional beast. This ultimately plays out in a hilarious sequence with baby Groot dancing around explosions and monsters while Mr. Blue Sky by Electric Light Orchestra plays out through some speakers. It’s a brilliant sequence.

This opening segment pretty much sets the mood for the entire movie. Over the course of the next two hours there will be plenty of explosions, lots of well-written humor and the adorable Baby Groot offering up some comic relief to break up the tension in even the darkest of moments. As the plot unfolds with Rocket stealing some batteries from the Sovereigns and making the Guardians public enemy number one, there is also the arrival of Ego, claiming to be Peter’s long-lost father, with his companion Mantis (Pom Klementieff). Of course, with the bad guys in hot pursuit and Ego’s true intentions soon-to-be revealed, rest assured there will be plenty of action with an almost overbearing amount of explosions.

Most of the cast has at least a few moments to shine but some characters suffer the fate of a large cast. Unfortunately, Zoe Saldana seems to get the short end of the sword as does her screen sister Karen Gillan. Groot easily outshines Rocket this go-around while Drax has some of the best lines altogether. Russell turns in a fun performance while Stallone doesn’t get too much to do but does well in introducing us to Starhawk, which rumor has we’ll see more of in future movies. And yes, we even get Howard the Duck back!

The movie does have a few points that ultimately make the film suffer a little. It drags some toward the middle as a plot twist tends to take a little too long to develop. And the climactic battle at the end is a CGI fest that borders on being almost too much to handle (think Transformers chaos). All that aside, the well-written dialogue, entertaining characters and another amazing soundtrack make this a must-see in the ever-growing Marvel cinematic universe. James Gunn has cemented his status as one of the better Marvel directors and is already planning his return for the just announced third Guardians of the Galaxy film.

Be sure to stay through the end for multiple end-credits sequences and surprise cameos. You won’t be disappointed, even if the overall adventure seems just a little less exciting than the first film. That said, Make Mine Marvel!