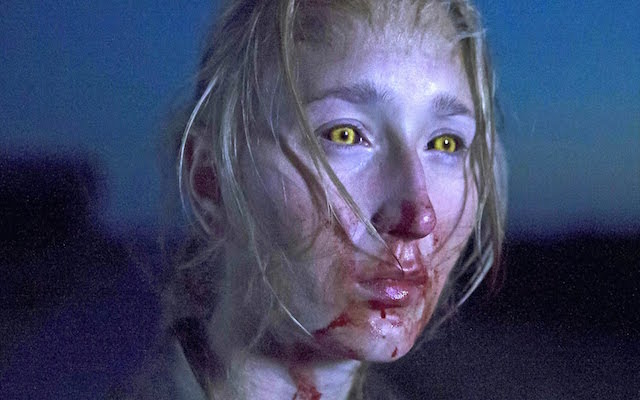 Allegory in film is difficult. In a medium that is typically pretty straight forward, linear, and consumable with its story, more complex narrative devices be challenging. Adding thematic layers that are not heavy handed, clunky, or just silly is something typically reserved for filmmakers at the top of their craft. While its subtlety could be argued, the new film from Jonas Alexander Arnby, When Animals Dream is a pretty great example of a film working on several levels, one of which is an allegory that would make any of Aesop’s Fables envious.

Before we get to that though, it should really be mentioned how well the filmmakers world-build here. In the oft recited, but rarely practiced, “show don’t tell” approach to moviemaking Arnby and company show us so much without telling us much of anything. In the first ten minutes we are shown the life of our protagonist Marie (Sonia Suhl) and her environment. With very little dialogue, and none of the “Yes, father I have fed my ailing mother her breakfast as she does every morning.” bits of clunky exposition so often found in film, we are introduced to her desires, her struggles, her motivations. While this seems small and nearly unnoticeable as we’re watching the film, it is a huge step into making a successful movie.  This is especially true in a film that will take the leap into fantastical allegory with such dedication by the end of the first act.

When it takes that leap, it is pretty clear what the changes that affect Marie really symbolize. This isn’t to say it is anything near clunky or on the nose. No, this film is not that. It is just content to lay it’s thesis in front of the audience and state “this is our idea.”  The idea, in this case, is that the legend of the werewolf is strangely similar to the idea of the pubescent transformation of girl into woman. There is a direct scene in When Animals Dream in which a doctor is describing Marie’s symptoms as she will change into this beast. With no context, He could be listing the symptoms of female puberty. This is not coincidence and it is not subtle. It is a pointed statement.

Beyond a simple allegory on werewolf as puberty, though, the film goes a bit further. The idea of the Monstrous Feminine is not new in the world of cinema. There is a long history in horror of portraying a woman and her femininity as a source of fear for men. That a woman with sexuality and confidence is somehow the most dangerous thing. That is what this film is about. It is about the men in this story trying desperately to tame and control Marie’s womanhood. Wether they succeed or not is something for the audience to discover on their own. The allegory, regardless is well crafted and prescient considering our current social landscape of feminism shaming.

There seems to be comparisons between this film and Let The Right One In. Some of them are valid, such as the general character arcs, but some seem displaced. While Let The Right One In deals with puberty and the desperation to connect in a time when we feel more alone than ever, When Animals Dream is more of an exploration of what it is to be a woman in a male dominated village. It explores what it is to want nothing more than to be yourself, knowing damn well everyone wants you to be anything but.

Comparisons or not, though, When Animals Dream is an impressive piece of filmmaking just as Let The Right One In is. It is rare, especially in horror, to find a film that is interested in exploring anything resembling a tangential idea. It is refreshing, then, to find a film that takes its running time to create a world, create complex characters, and to create social questions through allegory that the audience can discuss afterwards.

Review: Fueled by Rehashed Jokes, ‘Super Troopers 2’ Stalls Out in the Middle of the Road