REVIEW: The Revenant is Intense and Beautiful 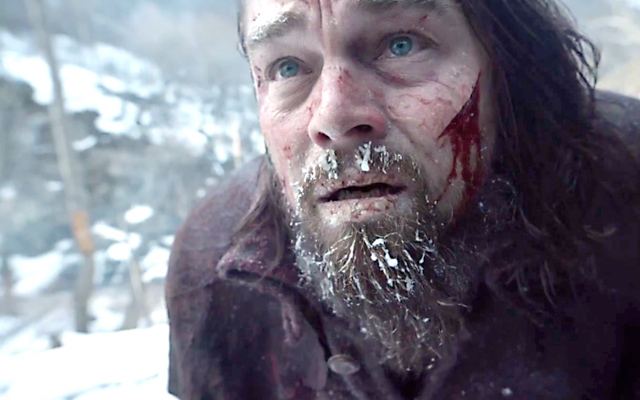 The intense, beautiful, frozen landscape of Montana and South Dakota is blood soaked in Alejandro Inuritu’s, The Revenant. I have been waiting in anticipation for this film for over a year, so I might come off a little biased. With that being said, I am willing to say I am wrong when a film does not live up to the hype. But this will not be one of those times.

The seemingly calm and quiet landscape is the center of brutality for Hugh Glass, played by Leonardo Dicaprio and the rest of the fur traders during the 1800’s. The untouched wilderness and indigenous tribes pose one grueling threat after another in this not stop dramatic thriller. The opening sequence sets the intense and anxious mood for the rest of the film. It is a film of revenge across the board. There are times you beg for a break to breathe just for a second, but even the moments of deafening silence seem to take your breath away. I found myself leaning forward on my knees, hands over my mouth many times reminding myself to breathe.

Alejandro Inuritu, who brought us the unconventional stylings of Birdman knocks it out of the park with The Revenant. His demand to shoot on location and using only available light while being devoted to staying historically accurate paid off in a big way. I feel it is an amazing testament to a director for actors to put themselves through such extreme hardships because they believe in a vision and trust him as a leader. As Dicaprio said in an interview with Variety, “ I wanted to do this film and go on this journey with Alejandro. It was all about going on this journey with him.”

Now let me let my nerd side shine for a minute. This is one of the most beautiful films I have ever seen. It was hard as a photographer and artist to not get caught up in how beautifully this film was done. From the close up shots that are almost too personal to bare to the wide open shots of the incredible landscapes that are so vast it’s hard to comprehend. Emmanuel Lubezki (Birdman/ Gravity) is a master cinematographer and proves to be a god amongst men with this film. The use of available light sets you right in the moment, with no sense of falsity. There is a gray cold overcast set across the entire film that comes from the cloud covered,frozen setting and it is captured brilliantly. You can almost feel the freezing temperatures in your chest and on your finger tips as you watch these men make their trek through the daunting wilderness. Visually this film is something to be coveted. The cinematography is mind blowing. You get lost in the story from the opening scene and the camera is so intimate with the actors you can’t help but feel immediately pulled in. It’s been a long time since I have sat in a theater and listened as the people around me collectively gasped for air or wince at the pain and agony seen before them.

We have all heard of the epic bear fight at this point, and it feels as real as it could possibly be without actually being attacked by a bear yourself. The camera work is so personal and let me tell you, it is terrifying. There are so many phenomenal scenes in this film and another one is the first battle sequence between the fur traders and the Arikara tribe. The
camera goes places you wouldn’t think possible, capturing every view point of the brutal fight taking place. Going overhead and underwater, through fire and smoke, you gain an immediate sense of awareness. I think it is safe to say that I can’t say enough about how brilliant and innovative Emmanuel Lubezki’s work truly is. A friend of mine so graciously lead me in the direction of his instagram not too long ago and as a treat I welcome you all to follow him @chivexp you won’t be disappointed I promise.

So I won’t lie, Dicaprio has always been one of my favorite actors and he never seems to disappoint. I could go on for hours, talking about all of my favorite roles that he has played and why he was so amazing in each one of them, but I will spare you all and just say that this role in this film is no different. He never let’s up. The grueling measures his character (Hugh Glass) goes through for survival and revenge is not lost in Dicaprio’s skill and determination. I will have to admit when the film started all I could think was, “Please let this/him be believable.”

This was coming from me, a huge Leo fan, but more importantly I was coming from a place of, “Please don’t let this be just another story of a white man living amongst the Native Americans.” This film couldn’t be further from that. But then you realize that there comes a point when you have to take your hat off to an actor when you see that they are truly a master of their craft and they have fully committed to their role. They become so entrenched that the look of pain or fear you see on their face isn’t acting anymore, it’s real. Dicaprio does justice for Hugh Glass. You feel for this character, you want him to win and at times you think how much more are you going to endure? Just give up already, you can’t possibly take anymore. I can’t take anymore.

I don’t know if this is a testament to brilliant acting or the fact that sometimes I have a momentary lapse in memory. But it didn’t sink in that John Fitzgerald (played by Tom Hardy) was in fact Tom Hardy until almost half way through the film. I have to embarrassingly admit, this is not the first time that has happened to me when it comes to Hardy. His talent is never one to be overlooked, but of course we all know that by now. He is everything you want to hate in a man in this film, Yet you find yourself laughing (sort of) at some of his snarky delivery and his character’s ridiculously selfish outlook on life. I have always been in awe of actors. But these two men are able to completely transform themselves for the sake of their craft and it truly makes for a masterful film.

It was also a treat to see a few familiar faces in supporting roles such as Domhnall Gleeson (Harry Potter franchise) and Will Poulter (We are the Millers) just to name a couple. All of which put on fantastic performances. You really get a sense of how rugged these men really were and how day to day life seemed so unbearable and uncertain at times. But probably one of the most beautiful and intriguing parts of this film were the indigenous tribes. You can see that Inuritu had a great deal of respect for the environment and portraying these tribes in the realest way possible. They are depicted not as savages but as beautiful, resourceful people, handling life and the world around as it changes before their eyes.

Like I said before, this is one of the most beautiful films I have seen. I tend to get caught up in the cinematography often, but this film was all around a work of art. From the landscape and lighting, to the camera work and acting, and the amazing portrayal of the indigenous tribes it was was a mind blowing, heartbreaking and an extremely thrilling ride. It is a long and intense emotional roller coaster that requires a strong taste for violence. I will say you need to be in it to win it when seeing this film because it is an epic feat in it’s self to watch.