Not quite a month after Chesley “Sully” Sullenberger successfully executed a water landing of US Airways Flight 1549 on January 15, 2009, I watched him and his crew recount the experience on The Late Show with David Letterman.  (Until Dave retired, I got most of my news from the legendary comedian and talk show host.)  Through the magic of cinema, this scene is recreated in the new movie, Sully, with Tom Hanks replacing Captain Sullenberger and Aaron Eckhart replacing First Officer Jeffrey Skiles on the stage of the Ed Sullivan Theater.

Since I avoid the news channels and only read headlines from the “Weekly Reader” of newspapers, USA Today, I didn’t know much about the accident that turned Sullenberger into a national hero, aside from the appearance on Letterman.  Therefore, I found Sully to be very informative.  I don’t usually go to movies to be informed, though, but that’s not an issue here because Sully is also immensely entertaining.  Over seven and a half years after it really happened, I found myself moved by the dramatic reenactment.

You’d think by now I’d know not to underestimate Hanks. Every time I’m reluctant to see a movie, particularly a true story, starring Hanks, I’m reminded what an amazing actor he is.  It happened in 2013 with Captain Phillips and it happened this week with Sully.  He so subtly and so perfectly portrays a confident man haunted by a horrible experience.  He never quite admits that his actions might not have been necessary, but demonstrates a real vulnerability when confronted by an aggressive National Transportation Safety Board.

Speaking of that, when the entire world hails Sullenberger as a hero, why does the NTSB treat him like a criminal? I wonder if the members of the board, particularly Charles Porter (Mike O’Malley), Ben Edwards (Jamey Sheridan) and Elizabeth Davis (Anna Gunn), were really so hostile towards him or if their hostility was embellished in Sully to give the movie a bad guy to counterbalance the good guy and create conflict.  In either case, I do believe it was the insurance company behind the inquiry, not the airline or government.

The movie takes place within the same time frame as the investigation, beginning the night before it starts and ending immediately after testimony concludes. The script by Todd Komarnicki, based on the book “Highest Duty” by Sullenberger and Jeffrey Zaslow, employs flashbacks to recount the accident, both as Sullenberger remembers it and also as it unfolds through actual cockpit recordings.  (They’re remarkably similar, with the recordings painting a more favorable picture for the pilots than even Sully’s own memories do.) 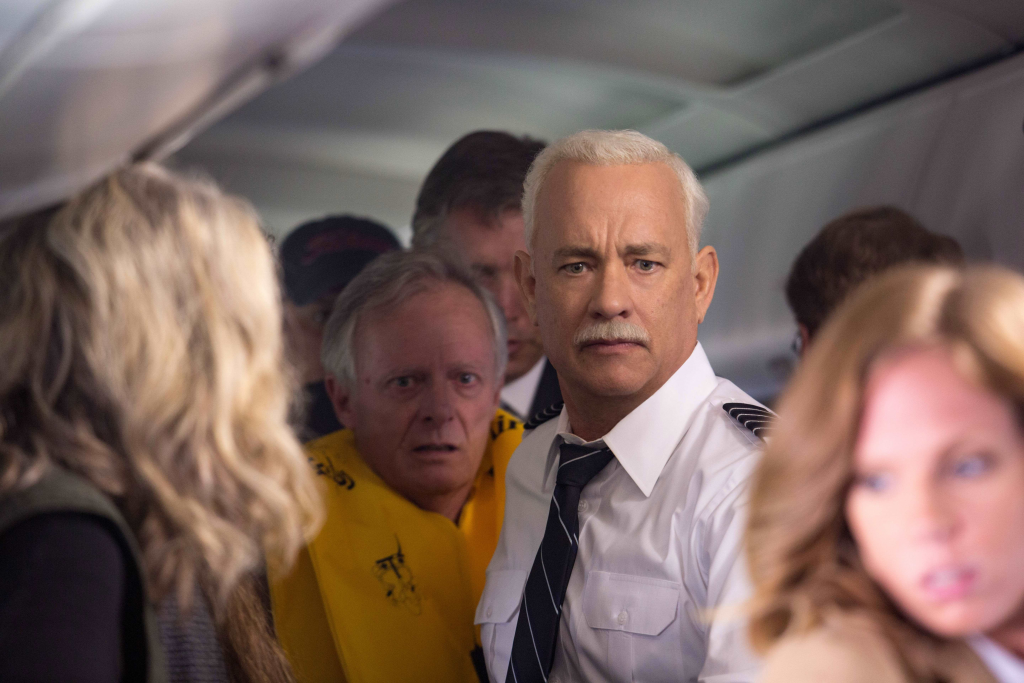 Both recreations are harrowing, from the moment a flock of birds flies into the engines until the passengers and crew are rescued. Plus, we get to witness abbreviated versions several more times through simulations that are part of the investigation.  You know everything is going to end up just fine for them, but that doesn’t lessen the intensity at all.  Included throughout the movie are scenes with reporters, always posing the worst possible outcome of a situation before time has been given to evaluate it (which is one reason I don’t watch the news.)

Director Clint Eastwood gives us his most lean and effective movie yet. At only 95 minutes, it’s (I think) a good 30 minutes shorter than most of his movies, which tend to run long for me.  While there could have been more to it, it’s really quite perfect as it is, ending on a humorous, tension-releasing moment that draws cheers from the audience.  I was inspired, not only by Sully the movie, not only by Sullenberger the man, but also by the reminder of how America reacts and responds in times of crisis.  It’s downright patriotic.