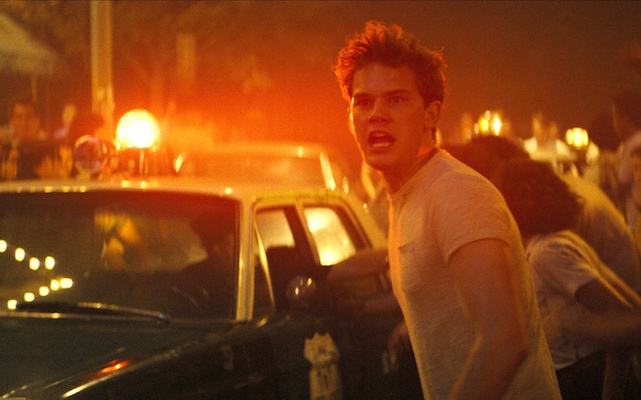 June 26, 2015 will be remembered as the date on which the Supreme Court declared same-sex marriage to be legal in all 50 states. We’ve come a long way from the Stonewall riots, almost exactly 46 years ago to the day, which began on June 28, 1969. In a year when gay rights have come so far, it’s appalling that a movie like Stonewall, which poorly recreates events leading up to the riots, would be released.

I didn’t just dislike Stonewall; I actively loathed it. I’m not sure where to begin and I’m not sure I can adequately explain my distaste for the movie, but I can tell you as a gay man, I was offended. I’m never offended by a movie; in fact, I laugh when people say they are “offended” by a movie, TV show or commercial. But now I know what if feels like, and it’s a dirty, nasty feeling.

Let’s start with the primary controversy over the movie: the lack of minority representation. I don’t actually believe that’s a flaw in Stonewall. However, for a historical event primarily involving those who were ethnic, drag queens, butch lesbians and transgender women, it’s ridiculous that a pretty white boy from Indiana is the first one to throw a brick.

I understand needing a character around which you can build a narrative. However, Danny Winters (Jeremy Irvine) doesn’t represent the people of Christopher Street in the Greenwich Village neighborhood of Manhattan. It’s hard to imagine his arrival in the big city would land him with homeless street kids, particularly ones who aren’t very nice to him. He seems to have more ambition than that.

Danny’s story, told in intermittent flashbacks, is stereotypical small town boy gay drama. He’s the son of the high school football coach, who kicks him out of the house when he’s discovered fooling around with the star quarterback. This is the subject matter of many bad gay-themed movies, but, in and of itself, is not necessarily offensive.

In New York, Danny is given opportunity, presumably because he’s good-looking and acts straight. However, he’s also exploited. This is perhaps the most realistic part of the movie. But then it’s squandered when he returns to the street kids where he so obviously does not belong. Everything else aside, I guess I just didn’t believe he would have so much anger built up inside that he would incite a riot.

Stonewall attempts to weave historical fact through its story, but this only dilutes the purpose of the riot. The Stonewall Inn is owned by the mafia, so the frequent police raids aren’t necessarily designed only to identify illegal homosexuals. The police alert them ahead of time so they can receive payoffs. The owner, Ed Murphy (Ron Perlman) pimps his clientele against their will.

Deputy Seyour Pine (Matt Craven) is the Jim Gordon of the police force and coordinates an unannounced raid to nab Murphy. Considering this fact, the riot actually disrupts an event that would have done the gay community a favor. I’d like to think it demonstrates what a complicated situation was unfolding; instead, it just makes the riots look unjustified.

I don’t know the sexual orientations of writer Jon Robin Baitz or director Roland Emmerich, but Stonewall plays like it was made by straight people without an ounce of authenticity. I think it wants to be uplifting, recreating an event that launched us on a path to equality, but words on the screen saying so cannot compensate for two hours of movie that tells us otherwise. Please avoid it and read a history book instead.