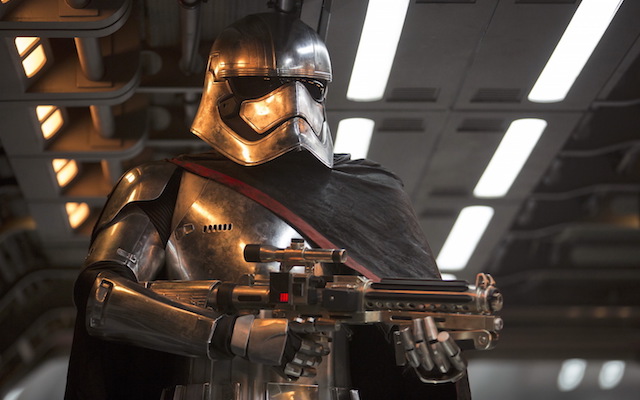 I’m writing a review for Star Wars: The Force Awakens knowing three things. First, it’s practically review proof; nothing I say is going to cause anyone to see it or not see it. Second, I must think in terms of two audiences: fans and average moviegoers. Third, I’m not sure it’s possible to talk about it objectively after the first viewing. Therefore, to almost quote a line from another movie entirely, I’m going to forget how it looks and talk about how it feels. What was my experience watching the movie?

A long time ago…

To understand my perspective, you’re going to have to indulge me in a little historical background. 38 years, 6 months and 20 days ago, in a town far, far away… Oklahoma City, I saw Star Wars during its opening run at North Park Mall. I was 14 years old and just graduating 9th grade, which was the end of “junior high” in my hometown of Enid. At that young age, I was already a movie buff with an interest in horror and science fiction.

I loved it! I collected everything I could relating to Star Wars, including the first set of action figures for which you had to mail an Early Bird certificate because Kenner didn’t have them ready for retail. (I still own at least 8 plastic storage tubs full of vintage Star Wars toys and memorabilia.) I recorded the Star Wars Holiday Special on Betamax, as well as any television appearance of the stars. I could hardly wait for the sequels.

I saw The Empire Strikes Back on opening weekend in Portland, Oregon. Immediately after the movie ended, as the credits began to roll, the John Williams score was silenced and the theater manager announced that Mt. Saint Helens had erupted again. I was on a high school band trip and the bus drove us back to our lodging in an eerie “snowstorm” of gray ash. I spent three long years obsessing about the identity whom Yoda said, “There is another.” (My best, pre-internet guess was Princess Leia.)

I saw Return of the Jedi during what was arguably the best summer of my teenage life: 1983. I had blossomed socially at college and, when I returned home for break, had become reacquainted with a group of kids a year behind me in school. We all loved Star Wars, drove to Oklahoma City for one of the first showings of Jedi, and stood in line multiple times to watch it again at the Video Twin theater in Enid. Older and wiser, we found more humor in this installment, particularly in Jabba the Hutt.

So, yeah, I fit into the Star Wars fan category. However, I’ve tried to avoid information about The Force Awakens. Do you know how hard that is to do? It’s not for lack of trying, but for its pervasive presence everywhere. As if George Lucas didn’t make a fortune with the merchandising rights when he owned it, Disney can now milk it in ways he never dreamed. I don’t know what they had to invest to participate, but a seemingly endless number of other companies also seem poised for a big payday.

Here we go… As a fan, I loved The Force Awakens. It’s the Star Wars you’re looking for, so much more like the original trilogy than the busy, CG-heavy prequel trilogy releases from 1999-2005. It has the look and feel of a live-action Star Wars movie, not a computer-animated one. The interiors are small, dark and claustrophobic. Less is definitely more. It’s more intimate, more human. A lot of the action takes place on planet surfaces, which makes it seem more realistic and dangerous.

There’s not much I can reveal about the story, but the screenplay by Lawrence Kasdan & J.J. Abrams and Michael Arndt is incredibly clever about twisting the exact same elements that made the original series so involving into something that feels new and different. In a lot of ways, it’s more like The Empire Strikes Back than Star Wars. It’s heavy with family issues from its opening scenes. The story is its strong point with the action sometimes taking a back seat.

The new characters are great and are great together. In what was probably a wise move by the filmmakers, a lot of time is spent getting to know them before we catch glimpses of our old favorites. Poe Dameron (Oscar Isaac) is the Republic/Rebellion’s best fighter pilot. Rey (Daisy Ridley) is a scavenger on the planet Jakku. Kylo Ren (Adam Driver) is trying to fill the boots of Darth Vader. Finn (John Boyega) is… something I didn’t know ahead of time, so I’m not going to spoil it for you.

There’s real acting here, something absent from the prequels and, if you’re honest, not always present in the original trilogy. The chemistry between Ridley and Boyega is particularly strong. Less effective is Isaac, although there’s a link between him and Boyega better expressed onscreen by the latter. The best of all, though, is Driver. He’s a truly tortured soul, given to fits of rage, although not necessarily directed at people like his idol’s was before him.

There’s a lot of character-driven humor from the new kids, long before Han Solo (Harrison Ford) and Chewbacca (Peter Mayhew) step on board the Millennium Falcon. After that, there’s a lot of retro humor with references to the events of Star Wars, Empire and Jedi. I experienced many laughs from deep in my belly. Dare I say, there were even some tears, not from the nostalgia that I was feeling, but from events in the story.

Now, as an average moviegoer, I might say The Force Awakens doesn’t do enough to set itself apart from what we’ve seen in the past. It’s a little too familiar, even down to “The Weapon” with which the evil First Order threatens the galaxy and the Rebellion’s measures to destroy it in the final act. Perhaps that’s why it comes so late in the movie and so little screen time is given to that climactic event. As I said earlier, an emphasis is placed on the human element and the obligatory one-on-one lightsaber fight.

I might also say that it starts a little too slowly and took precious time for me to become oriented to what was happening. It doesn’t begin with an action sequence. In fact, the action sequences are not what I’m going to remember about The Force Awakens. Nothing matches X-Wings zooming down the trenches of the Death Star in Star Wars, AT-AT walkers lumbering across the surface of Hoth, or even Ewoks using catapults to hurl rocks at the bad guys.

Finally, I might say that the twists and turns of the story are a little predictable. I was truly surprised by one of the character revelations; however, I feel certain there’s another one coming that’s not going to surprise anyone. The movie could have taken the opportunity, with its look and feel that pay tribute to the original Star Wars, to branch out and do something different, rather than just juggle its components in reversals of gender and race.

Luckily, the fan that saw Star Wars: The Force Awakens is more dominant than the average moviegoer. I look forward to seeing it again when I don’t have to examine it with a critical eye. I want to see it on the biggest screen with the loudest sound and with a sold out theater full of people like me. It’s not going to capture my imagination like a boy 38 years my junior, but if I were a 14-year old seeing Star Wars for the first time… well, this movie would awaken a force within me.