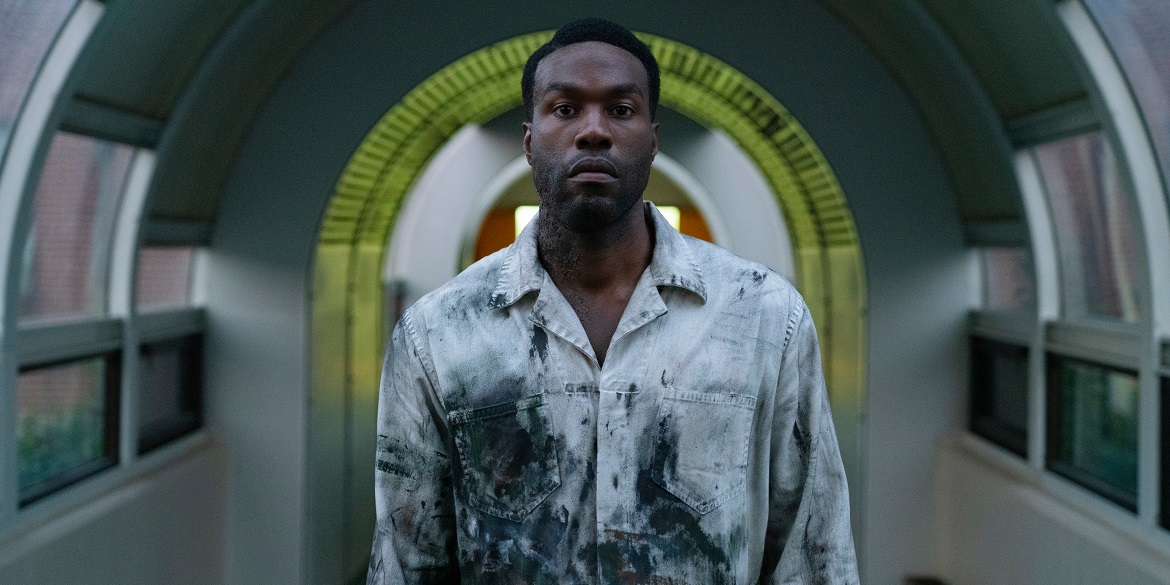 The concept of an Urban Legend is something that seems timeless on its surface. Stories passed down from generation to generation, mutating and morphing along the way. Told as both cautionary and morality tales, they cover every genre imaginable but are most effective when to horror. At its core, director Nia DaCosta’s Candyman is the perfect play on those legends. With roots mired deep in a dark and tumultuous history. A different take on a tale that’s endured for decades. One that, in an advanced technological age, reminds everyone that the past is the most terrifying thing of all. And those who don’t learn from it, are burdened to carry the weight on their shoulders.

This “spiritual sequel” to Bernard Rose’s Candyman (it wisely ignores the two 90’s sequels) begins Cabrini-Green. The latest in gentrification effort in the sprawling Chicago, only small remnants of what once were housing projects, now reside behind fenced-off areas. Up and coming visual artist Anthony (Yahya Abdul-Mateen II) and his gallery curator partner Brianna (Teyonah Parish) have settled into a posh loft apartment on the ashes of the old projects.

One night at dinner, Brianna’s brother Troy (Nathan Stewart-Jarre) regales company with a tale from the area. The story of grad student Helen Lyle (Virginia Madsen) who went looking for Candyman and lost her mind, after echoing the bogeyman’s name 5 times in a mirror. For Anthony, who’s stuck in a 2-year creative block, the tale is all he needs to hear, as curiosity gets the better of him and he invokes the boogeyman’s name.

After a recent meeting with art dealer Clive (Brian King) he’s described as the “great black hope of the Chicago art scene of tomorrow”. Desperate to capitalize on what that could mean, he stomps on down to old the remnants of Cabrini- Green, for inspiration. A chance run-in with local laundromat owner Will Burke (Colman Domingo), helps flesh out the urban legend, and the tragedy of the area throughout history. “Pain like that lasts forever. That’s Candyman,” Burke says in a tone that hits Anthony deep. Spurred on by the story and some connection he cannot explain, he becomes obsessed with all things Candyman. Becoming consumed both mentally and physically, to the point where he no longer starts to recognize himself in the mirror.

Since most will be coming into Candyman based on its marketing as a horror film, it should be stated that this is and isn’t your basic scare-o-rama. DaCosta and everyone involved are interested in making something bigger and more impactful. A tale that deals more in eeriness and creep factor, rather than pure adrenaline scares. Working its way under your skin and taking root, much like the bee sting Anthony suffers early on. This isn’t to suggest that Candyman is a bloodless affair. There’s plenty of the red stuff spread throughout. In all manner of grisly fashion. The difference is that it’s all done so through an artistic eye, mirroring both the world and state of mind of the main character.

Where Candyman ultimately trips over itself, is in attempting to stuff too much into such a small space. The world that co-writers DaCosta, Jordan Peele (who also executive produces), and Win Rosenfeld are working feels vast, but the prism through which they apply social commentary on race and injustice feels at times abruptly narrow. Never before has 90 minutes felt like such a cruel vise. Doing so means a lot of threads (both character and story-wise) are abandoned. That fractured attention inevitably leads to a rushed 3rd act. Where nuanced ideas aren’t so much hinted at, but hammered over the head. Were there more time to sit with the topics or  smaller plot points raised (Brianna’s familial connections to the art world), it would be forgivable.

What separates the film from most of the other “also-rans”, even past the social aspect, is the composition of it all. Much like the pieces on display in the various shows, studios and museums featured, Candyman comes across as a stunning work of art. Almost achingly so. Everything is constructed and assembled beautifully. The numerous mirrors and reflections that are played upon through cinematographer John Guleserian’s lens are exquisite. Allowing considerable amounts of dread to peek in through the corner of the frame. The same goes for the simplistic, yet haunting shadow puppet artistry of Manuel Cinema. Their work informs the story’s numerous flashbacks. Visually there isn’t a false note here. Meticulously exceptional on almost every level.

It wouldn’t fall into place though, without Robert Aiki Aubrey Lowe’s utterly stirring score. This is a soundscape that simultaneously accentuates and elevates Anthony’s turmoil, not to mention the specter of Candyman himself. Choirs that sound like ghosts of the past. Sonic stings that echo the swarm of a hive. There’s transformative power in how arresting the music truly is. Any comparisons to Philip Glass’ contributions to the 1992 film would seem foolish, however, Lowe’s hypnotic pieces tie everything around it together.

It’s almost telling that DaCosta’s Candyman excels when it’s playing upon variations on a theme. The story is familiar. At times almost to a fault. The embellishes, twists, and societal aspects help keep it interesting. Though, at the same time, the surface nature examination of those elements holds it back. DaCosta appears somewhat cognizant of this and plays everything on a grand scale that’s altogether mesmerizing. At least from a technical aspect. And that’s what makes the whole thing a tad frustrating.

To whatever point some will likely say that DaCosta and company have missed the mark, such discourse is always going to happen. When social messages threaten to overshadow other elements of a film, that’s the expected result. Often it’s even encouraged, for the potential to start a dialogue. In the case of Candyman, it’s what happens when a gorgeously crafted horror film attempts to marry art, commentary, and commerce into a tidy package. Yet focusing solely on the social whiffs it might make is to overlook the powerful artistry on display.