REVIEW: The Legend of Tarzan

Tarzan movies have never been particular favorites. However, I have seen them all since 1981’s Tarzan, the Ape Man, which was really just a showcase for Jane, played by Bo Derek.  I liked Greystoke: The Legend of Tarzan, Lord of the Apes (1984) and Disney’s Tarzan (1999).  I even found a few pleasures in Tarzan and the Lost City (1998) with Casper Van Dien.  If you asked me, I would have guessed there have been more Tarzan movies in the last 35 years.  However, there haven’t, and it’s been 17 years since the last one.

What I’m saying is that it’s about time for a new Tarzan movie, and I enjoyed The Legend of Tarzan as much as any of the others.  I don’t know if it’s an attempt to launch a new franchise or not, but it does a pretty good job of modernizing the tale, if not by the story itself, then by a meta approach to the story that has not previously been taken.  When it begins, Tarzan has returned to England as a celebrity, the reputation of his jungle persona preceding him.  People laugh with him about “me Tarzan, you Jane” and his infamous “Tarzan yell.”

Actually, The Legend of Tarzan begins with a pre-titles sequence establishing a historical reference for the time period.  It was all a little complicated for me to understand at first, but it doesn’t matter later.  All you need to know (I think) is that, around 1890, the King of Belgium has gone bankrupt expanding his empire into the African Congo.  His emissary, Captain Rom (Christoph Waltz), is onsite to arrange the trade of a captured Tarzan for a trunk full of diamonds.  Oh, and the natives are being taken into slavery to build the king’s railroad. 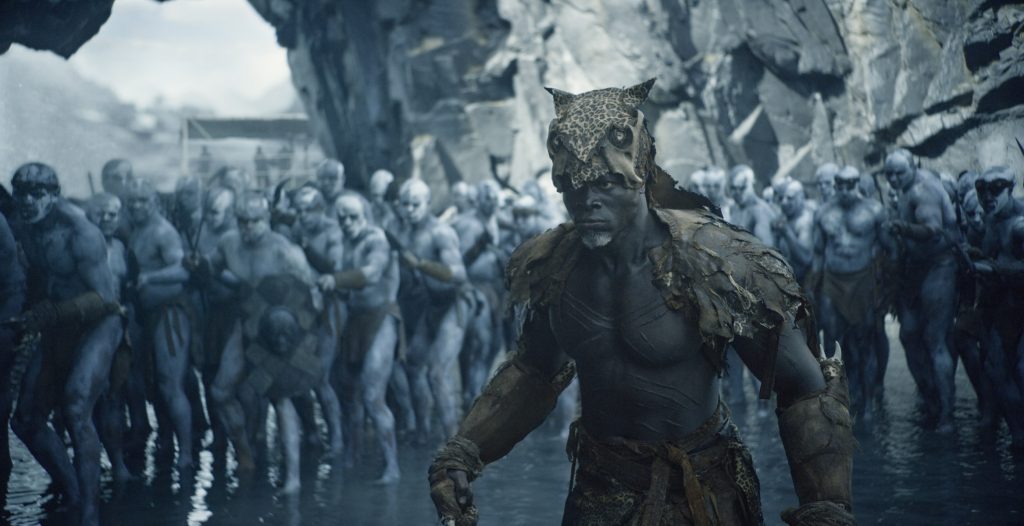 Even that boils down to two things: Rom is the bad guy and Tarzan must release the slaves. It’s a simultaneously complex, yet simple, plot.  I applaud the writers’ (Adam Cozad and Craig Brewer) decision to begin in the present and show Tarzan’s origin in relatively brief flashbacks, even though they’re heavy-handedly placed during specific, thematically-related events.  However, the subplot about the reason Chief Mbonga (Djimon Hounsou) wants Rom to capture Tarzan ends up being less important than it’s originally depicted as being.

Enough about the story, which obviously has components I liked and components I didn’t. Let’s talk about the characters.  In Alexander Skarsgard’s performance as Tarzan, we see something new and it’s terrific.  His physical characteristics show results of growing up in the jungle.  His shoulders have overdeveloped so that he walks with his head slightly forward.  His arms seem just a little longer than those of most men.  And the bone structure of his hands, as he demonstrates to a group of admiring school children, has evolved due to their use in the jungle.

Even though that’s impressive enough, when he finally rips off his shirt (later in the movie than you might imagine he would), that man is ripped! Tall, lean and sinewy, whether you’re male or female, gay or straight, your breath is likely to be taken away.  Don’t take my word for it.  The audience during the screening I attended made a collective gasp, followed by nervous giggles.  In action, his Tarzan is part Batman, a “ghost in the trees” moving silently through the jungle, and part Spider-man, swinging through the jungle as we’ve never seen the character do before.

Margot Robbie’s Jane is nearly as good. Yes, she becomes the damsel in distress, but she never sacrifices her strength to become a victim.  (Rom even calls her a “damsel” at one point.)  Having grown up in the civilized part of the jungle, she’s very nearly Tarzan’s equal.  Their relationship gives the movie an Outlander vibe similar to that show’s relationship between characters Claire Randall and Jamie Fraser.  They’re a great team.  And even though Tarzan must also rescue Jane, it’s portrayed more like another one of the movie’s subplots. 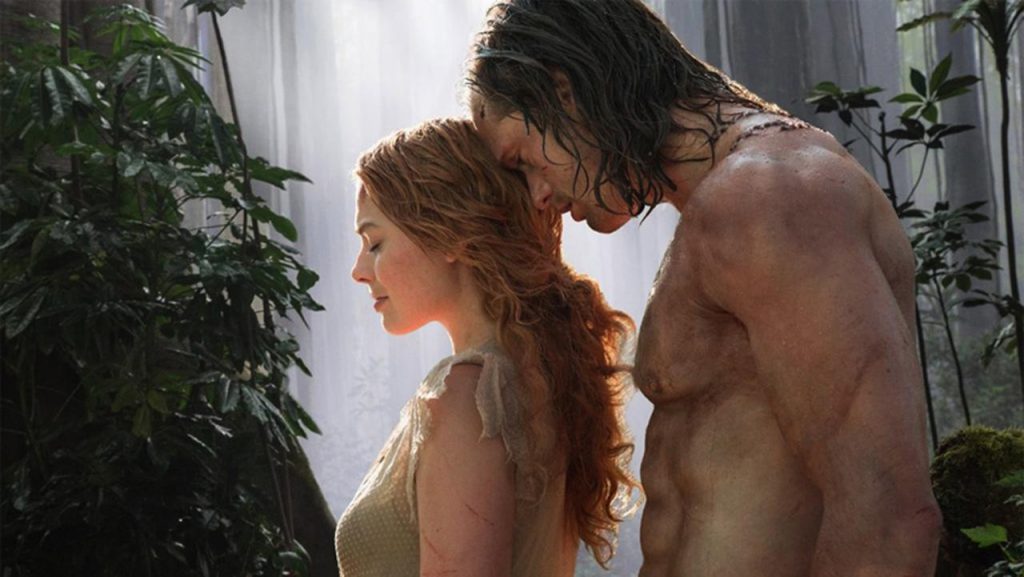 Waltz is fairly restrained as the villain. He stops just shy of twirling the moustache about which an imprisoned Jane tells him one side is longer than the other.  He always carries a rosary (made out of spider silk) and the prop becomes a key part of the action on at least two occasions.  His character prefers to lurk in the shadows, spying on his prisoner.  With one dinnertime exception, rather than confront Jane himself, he sends his lackeys to do it for him.  He seems to be aware of Tarzan’s reputation and take all the necessary precautions to fight him, but… you know.

Finally, I can’t decide how I feel about Samuel L. Jackson’s role as comic relief sidekick for Tarzan. First of all, his ability to keep up with him in the jungle, even though great efforts are made to play it for laughs, just wouldn’t be possible.  If a regular man can run across the plains and jump off cliffs, then what special abilities does Tarzan have?  His George Washington Williams is an American Civil War veteran along for the ride so that the United States can determine what’s really happening in Africa.

If I were a smarter man, there might be some subtext about his experience and the slavery crisis in Africa. It’s an example of the potential for serious subject matter in the movie.  But it’s also an example of how all of that is ultimately sacrificed for the action in a way that doesn’t quite tie it all together satisfactorily.  The action is great, though, and I could stare at Skarsgard for hours. The Legend of Tarzan is entertaining enough.  With my limited exposure to the original source material, it’s as good as I could imagine for an 1890 Tarzan in 2016.