Review: Should You Judge “The Book of Henry” by its Cover?

Sometimes, no matter how good the acting, dialogue, directing, music and other components of a movie may be, I just can’t look past the nature of its basic story. The Book of Henry is technically terrific on all accounts, but I struggled with how to react to the unusual mixture of funny, happy, sad, dramatic and dark subject matter.  It’s not only that the story shifts three major tonal gears during its 105-minute running time, but also that it shifts from a chain of events that is realistic to one that I can’t imagine possibly happening.

I entered the theater knowing nothing about the movie except that it was directed by Colin Trevorrow (Safety Not Guaranteed, Jurassic World and Star Wars: Episode IX, a few years from now) and starred Jacob Tremblay, the young actor (and Oscar nominee) who moved me so much in Room.  I had not seen a trailer or commercial.  I had not read a synopsis.  On that little information, though, my expectations were high.  It’s not that I was disappointed after watching the movie; it’s just that I was perplexed.

Watching the trailer now, I see that it may have better prepared me. It actually focuses on the part of the movie that doesn’t begin until around halfway through, without revealing the “twist” that happens at the halfway point.  That means it focuses on the dramatic, dark subject matter that caught me off guard after experiencing the funny, happy, sad subject matter of the first half.  Since this second half won’t be a surprise if you’ve seen the trailer, I’m going to assume most people won’t consider discussion of it here to be spoilery. 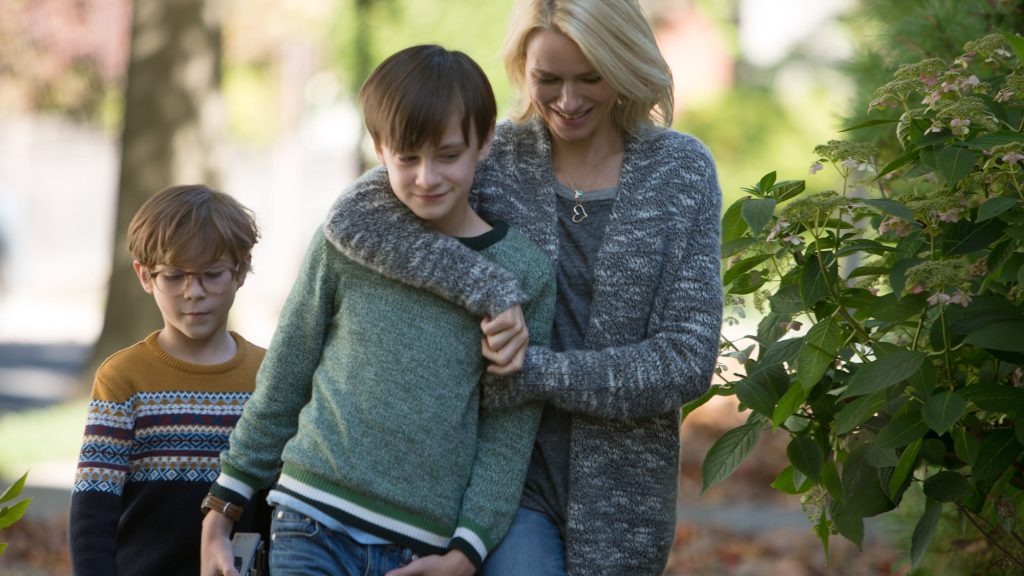 Susan Carpenter (Naomi Watts) uses her son’s notebook, the titular “Book of Henry,” to guide her in a plot to assassinate Glenn Sickleman (Dean Norris), her police superintendent neighbor, whom she suspects is abusing his stepdaughter, Christina (Maddie Ziegler). Even if I could accept that a mother of two who can’t even balance her checkbook would be able to accomplish such a feat, I have a hard time imagining she would actually attempt to do it.  This is largely because we’re never shown definitively that Sickleman is guilty of this crime.

Yes, her son Henry (Jaeden Lieberher, Midnight Special) is a child genius and his notebook, as well as a cassette recording, leads her step by step through the process.  And even though every other method to report the supposed crime has been tried and failed, assassination seems extreme.  You could say the resolution of this plot makes everything work out all right, but it doesn’t erase what happens prior to it.  In a way, it’s too pat a climax with a conclusion not equal to the buildup.

Let’s look at the first half of the movie to find the pleasures that The Book of Henry provides.  As Henry narrates in the trailer and at the beginning of the movie, the story is “about me, my mother, my brother, and the girl who lives next door.”  11-year old Henry is gifted.  He has managed the family’s finances in order to amass a fortune, which Susan refuses to touch.  She works in a diner and is perfectly happy driving her beat up car.  He runs the family, but the concern of how Susan and her youngest son, Peter (Tremblay) would survive without him looms throughout the movie.

Peter lives in Henry’s shadow and possesses none of his brother’s genius. With big glasses and small stature, he’s bullied at school.  It’s interesting that Henry seems to have the respect of his classmates and acts as his brother’s protector when he doesn’t really fit in with them, either.  Perhaps the other children are scared of what Henry can do with is mind, if not his body.  Henry takes Peter under his wing, but the limitations in what they have in common are clear.  Henry is more successful at going down to Peter’s level than Peter is at rising up to Henry’s.

Henry witnesses something next door that we don’t. To believe his claim against Sickleman, we rely more on the evidence he describes.  We don’t see her bruises or school absences, but we have to take Henry’s word that they’re there when he repeatedly tries to bring abuse to the attention of Principal Wilder (Tonya Pinkins).  We do, however, see an increasingly sad little girl who struggles for a way to express herself.  More than not being 100% certain child abuse is happening in the movie, I didn’t want The Book of Henry to be about child abuse.

I bet the filmmakers would argue that the movie is not ultimately about child abuse, but there’s no denying that it’s the driving narrative force for any other themes.  The drama and humor of the family dynamic present in the first half is more palatable and reminds me of a movie I dearly love, Simon Birch (1998).  For the first 30 minutes or so, that’s what The Book of Henry supplies.  And that’s the movie I wanted.  I can’t criticize the rest for not being what I wanted, but I can say it doesn’t work as well as the first within the overall package.