REVIEW: In the Heart of the Sea 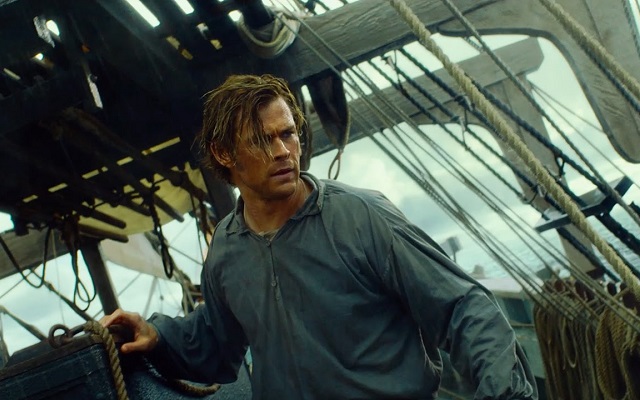 While everyone eagerly anticipates Star Wars next week, you might be as surprised as I was to discover that the biggest adventure of the season happens this week and closer to home: In the Heart of the Sea.  This is a movie that exceeded my expectations in nearly every way.  It doesn’t have Jedi Knights or a Wookiee, but it does have fearless sailors and a monster of a whale.

Advertising for the movie would have us believe this story was the inspiration for Moby Dick.  I don’t know if that’s true, but I do know the movie is based on the winner of the 2000 National Book Award for Nonfiction, In the Heart of the Sea: The Tragedy of the Whaleship Essex, by Nathaniel Philbrick.  The book uses an account by Thomas Nickerson, a teenage crew member of the Essex, while the movie uses a grown Nickerson (Brendan Gleeson), reluctantly sharing his experience with Herman Melville (Ben Whishaw), who’s researching the novel that would become Moby Dick.

I have a love/hate relationship with director Ron Howard’s movies; I love some of them and I hate some of them.  He’s at the top of his game, though, with In the Heart of the Sea.  With cinematography by Anthony Dod Mantle and editing by Daniel P. Hanley and Mike Hill, the movie is visually stunning to watch.  Yes, a lot of it is computer generated in a gray tone of early-1800s Nantucket and the cold sea, but the decisions made for shot composition and scene structure are very human.  Interesting choices were made for both.

I saw the movie in IMAX 3D.  I have a hate/hate relationship with 3D and here, as usual, it’s not the things you would expect to be dazzling in 3D that are actually dazzling.  Undersea photography and whales leaping out of the water are flat as a pancake, yet the quiet shots on a set with objects in the foreground create a uniquely intimate perspective.  Plus, by the final act, I had forgotten it was even in 3D.  IMAX, though, is the only way to see it.  The extra screen real estate adds noticeably to the height of the Essex and the depth of the ocean.

Although the account of the adventure is Nickerson’s, we see much that he would not have seen at the time, particularly in the rocky relationship between Captain George Pollard (Benjamin Walker) and First Mate Owen Chase (Chris Hemsworth).  The latter resents that he was passed over for promotion simply because the former carries a prominent Nantucket family name.  Considering everything that goes wrong on their voyage to harvest whale oil to keep the lanterns lit along the East coast, he’s probably glad he wasn’t in charge.

When nearby waters are found to be whale-less, Pollard takes the Essex off course.  They ultimately encounter more whales than they can handle, and one giant “white” whale that seems to carry a vendetta against them.  So far, this is what you probably expect of the story of In the Heart of the Sea, but it’s really only the beginning.  I had no idea it was going to turn into a brutal story of survival at sea and that characters for whom we’ve come to care would be faced with one horrible circumstance after another.

The acting is adequate; I feared worse from the hunky Hemsworth.  Gleeson fares best, especially in one touching scene for which I hope he’ll be nominated for an Oscar.  Overall, it’s a top-notch production, including a rousing score by Roque Banos.  It’s been a while since I’ve seen anything quite like it and I certainly recommend it as an almost guaranteed crowd-pleaser.

SXSW 18: Madness Breaks Loose in the Teaser Trailer for ‘The Ranger’