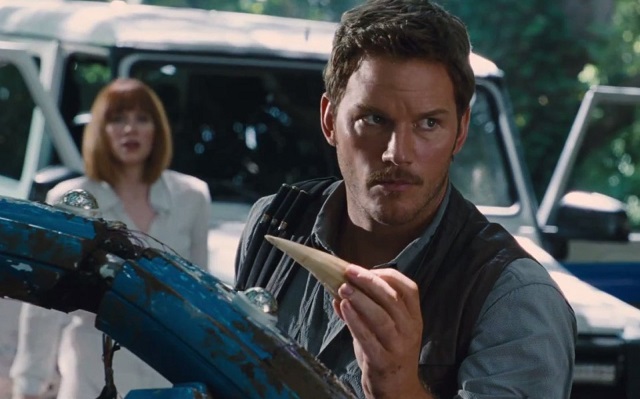 This summer has done nothing but surprise me.  I would never have guessed my favorite movies so far would be Mad Max: Fury Road and now Jurassic World.  But it seems Hollywood has finally found the right mixture of nostalgia to both please old school fans and enthrall new audiences.   Both movies are not really sequels, not really reboots, but a type of hybrid that contributes to a franchise, yet stands independently.  Plus, they’re just really fun movies.

Jurassic World acknowledges and respects the original Jurassic Park, but  states that those events were 20 years ago.  It doesn’t linger in the past; it roars on toward the future.  And the future of dinosaurs in Jurassic World isn’t just the familiar T-Rex or Velociraptor, but a hybrid that has been engineered as a new attraction to keep crowds coming to a fully functional theme park on Isla Nublar.  She’s one bad bitch, part T-Rex, part Cuddlefish, part tree frog and part ???

Sounds kind of cute, doesn’t she?  Well the Cuddlefish part makes the Indominus Rex a chameleon and the tree frog part lets it avoid thermodynamic tracking.  So she’s really more deadly than cute.  The action revolves around – surprise – what happens when she escapes captivity.  It’s Jurassic Park on steroids because there aren’t only a few people in danger, there are thousands of vacationers on the menu.

Also, the intelligence of the Raptors discovered in the other movies has evolved into full-fledged communication with humans… well, the one human who is nice to them, Owen (Chris Pratt), upon whom they imprinted when they were born.  To a certain extent they obey him.  Wouldn’t you know, though, that the evil InGen is still around and they want to weaponize his pets.  That sounds like a horrible idea, unless maybe they can help get rid of the Indominus Rex problem…

With all this dinosaur deliciousness, my favorite sequence involves the flying ones.  I don’t know if they’re called Pterodactyls or something else, but they escape their cage and wreak havoc throughout the park.  They swoop down and grab people, toss them between each other, and even dive bomb them when they fall in the water.  But when that happens, they have to watch for the large aquatic dinosaur that on a normal day would simply be jumping out of the water to grab a shark in front of a cheering crowd.

A consistent thread in any of the Jurassic movies is a child or two in peril.  Here, the two boys are the nephews of Claire (Bryce Dallas Howard), the woman who runs Jurassic World.  That means they get cool wrist bands that place them at the beginning of the line for all the rides, but more importantly means that when all hell breaks loose, Claire can allocate resources to rescue them.  Specifically, she wrangles Owen, who coincidentally she used to date.

The boys think he’s a bad  ass and they’re right.  Pratt is great in the role.  If the rumors are true about him being the new Indiana Jones, I think he will be fantastic.  He’s a good old boy with his heart in the right place.  He respects the “animals” in the park and the threat they pose, while at the same time survives while being in the midst of them.  He’s smart, he’s funny, and he brings out the best in Howard who, until the two paired up, I thought was going to be a major downfall of the movie.

Jurassic World is fast-moving and exciting.  Overall, I think it’s even more consistently entertaining than Jurassic Park.  Let’s say it’s Jurassic Park for a new generation.  You know, I keep reading that Tomorrowland was a box office failure which automatically means  that audiences don’t want to see original stories; they prefer sequels and remakes.  I disagree.  I think audiences don’t want to see movies that aren’t very good.  Between the two, Jurassic World is the theme park to visit.  It’s not necessarily because it’s familiar; it’s because it’s good.