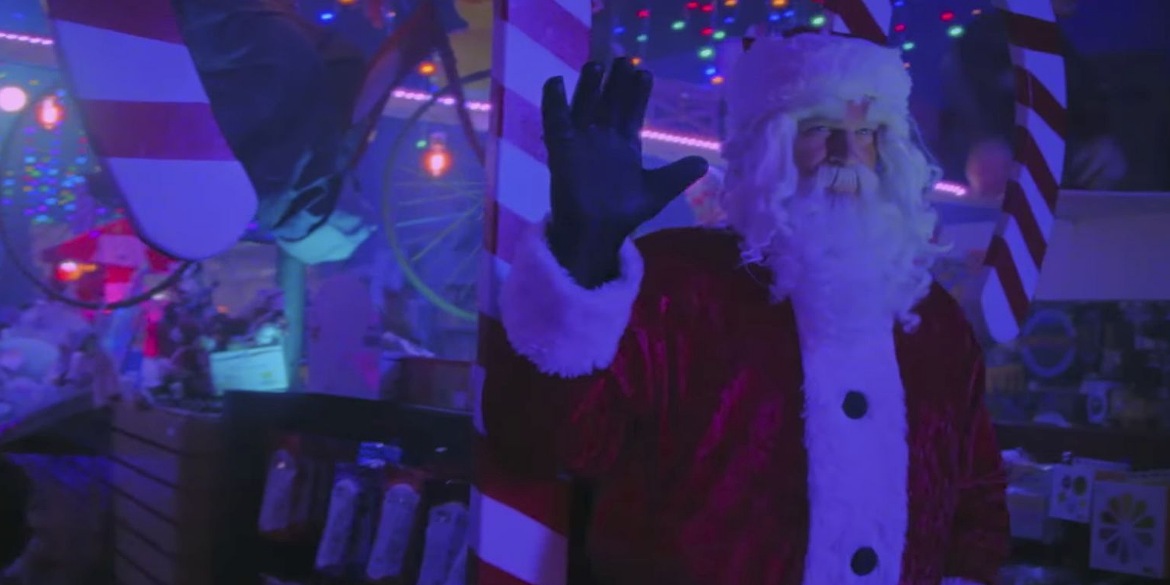 When it comes to the world of indie throwback films, competition is more fierce than outsiders might expect. The advances in cameras and the gung-ho spirit have saturated the marketplace with people wanting to be the next big thing. Often those movies get thrown into three categories. There’s lo-fi, low-rent and then there’s the Joe Begos special. It may sound like a negative, but it’s anything but.

Compared to others, Begos has a special knack for imbuing his films (Bliss, VFW, The Mind’s Eye) with a little extra pizzazz when it comes to capturing the spirit of exploitation. Films from the past. Christmas Bloody Christmas fits that ethos to a “t”, with its neon punk rock vibe that knows how to have a good time and scratch a particular itch that only a portion of the audience may be yearning for.

On a blistery -basically blizzardy- Christmas Eve record store owner Tori has but two thoughts on her mind: getting laid ans avoiding traditional Christmas commercialism. When her first option doesn’t pan out, she decides drinking with her co-worker Robbie (Sam Delich) is the next best thing. As long as he can stop suggesting to watch A Christmas Story for two seconds.

To start the evening the pair makes a quick stop by the local toy store owned by friends Lana (Dora Madison) and Jay (Jonah Ray). A store that just so happens to be sporting a promotional visit from RoboSanta+ (Abraham Benrubi). Think of all your nightmares of the jolly man in red over the exoskeleton of a reprogrammed T-800 and you’re in the right ballpark. An element highlighted by a TV newscast citing a global recall of the device, that sees the Santas falling back to their Government Kill Squad firmware.

Anyone going to see a killer Santa flivk called Christmas Bloody Christmas knows what they are getting into. The fun comes from how Begos goes about employing and twisting conventions and making something energetic, fun, and more than a little meanspirited. If you go into a movie that advertises the shenanigans of a killer Santa, you might be a little bit surprised to be greeted by the likes of “Before Christmas”.

That’s right, fusing the lackadaisical hangout vibe of a Linklater film, with the pop culture dialogue of Tarantino is something Begos does with great aplomb. Even if it could be argued he does so for a tad too long. As much fun as it is to listen to Robbie and Tori -as well as their equally interesting opinions- argue about sequels and hair bands, it overstays its welcome by the smallest of margins.

When it fully launches in the macabre madness one associates with the gonzo director, Christmas Bloody Christmas becomes a blood-soaked gift that people are likely to revisit again and again. It isn’t just the sheer amount of gore that splatters across the screen that makes it worthwhile, but a commitment to doing it all with practical effects. The way that fire reigns down on top of a vehicle after an impressive crash is a thing of beauty.

In the grand scheme of things that may seem like small potatoes. Yet for a genre hound like Begos, it means the world. So many other filmmakers say they want to make a throwback exploitation film but then cover up the seams with garish CGI. Not so here. By sticking close to his guns it gives the movie a somewhat timeless quality. Allowing it to stand alongside the very films it’s emulating.

That attention to detail isn’t just limited to the gore through. Begos and his team pour their hearts into every facet of the production. Steve Moore’s score has the basic synth work associated with a movie like this, but then he layers in heavy metal guitar work that pushes it over the top. The cast is filled with a veritable who’s who of genre staples including Jeremy Gardner, Graham Skipper, and Jeff Daniel Phillips.

The same goes for the lighting department, which may be the true savior of the film. Instead of traditional twinkly lights, this is one Christmas movie overcast in neon green and red lights. All without washing out skin tone on features. If anything it makes darker details stand out more. Such as in a house raid sequence where all the characters are bathed in green, adding a level of suspense that otherwise might not be there.

Whatever faults viewers might find in Christmas Bloody Christmas comes down to a case of “Your Mileage May Vary” or nitpicking. That is to say, this isn’t a perfect film, but it’s nevertheless entertaining the whole way through. Any film that can manage to feel like Terminator, Chopping Mall, and Hardware got put into a blender with a Santa’s hat slapped on it, is a special beast indeed. This is the kind of B-movie bliss that is sure to become a holiday staple whose notoriety only grows for years and years to come.

SXSW 18: Warner Brothers Pulls Out All the Stops For Their ‘Ready Player One’ Activation