“The only difference between insanity and belief lies with the number of believers.”
– Baron Reiter

The evil, love-obsessed archer Cupid returns to Star City, and the personal anguish between Oliver Queen and Felicity Smoak is reflected in her latest spree of terror.

Still grieving the loss of her Suicide Squad comrade Floyd “Deadshot” Lawton, Cupid (Amy Gumenick) vents her anger against the city’s high-profile couples in a twisted effort to prove that love is meaningless in the face of death. Such a brutal message couldn’t come at a worse time for Oliver (Stephen Amell) and Felicity (Emily Bett Rickards) who are struggling to coexist as members of Team Arrow after ending their romantic relationship. Ultimately, drastic measures are required to draw the vengeful Cupid out into the open, giving Oliver the chance to say everything he has been meaning to say to Felicity in the process. What follows is one of the most poignant and beautiful moments in the series’ history thus far. The moments between Oliver and Felicity have consistently been some of the best throughout this season and an apex is reached here, with each of them using the lessons of their life together as weapons to wear down Cupid in her onslaught. It makes what follows all the more crushing as Felicity explains to Oliver later on that everything she said in defense of love was true… But that it can no longer ever be true between the two of them.

As Team Arrow battles Cupid on the streets and at the altar, Laurel (Katie Cassidy) and Quintin Lance (Paul Blackthorne) must battle Damien Darhk’s legal defense in court. It turns out that Darhk (Neal McDonough) – now deprived of the idol that fueled his magic powers – must face the legal system in the wake of his kidnapping of Oliver’s son. But the wily supervillain has a rock-solid alibi, a false identity, and a lawyer who slices through all of District Attorney Laurel Lance’s witnesses like a hot knife through butter. The Lances know they only have one ace to pull that will get Darhk’s case sent to trial. The fact that they use it is a foregone conclusion, but it is a great moment in the season for Quintin Lance and reflects that the cynical detective has, in his own way, become just as much as a relentless crusader for justice as the Green Arrow himself. Like the latter, Lance goes after the supervillain with no regard to the cost to himself, considering any sacrifice on his behalf worthwhile in the name of seeing Darhk imprisoned. It’s a far cry from where we saw the detective at the beginning of the season. Special credit also must be given to McDonough who, as Darhk, does not utter a word during the events of this episode, yet does some terrific acting throughout all the same.

The island portions of “Broken Hearts” function as well as all the other elements of the episode. The object of Baron Reiter’s quest is finally revealed: a magic idol similar to the one used by Darhk. The enigmatic Reiter (Jimmy Akingbola) finally lifts the curtain on his mysterious past and tells a tale of his boyhood home in Africa utterly destroyed by predatory soldiers. As Oliver struggles with the hypocrisy of Reiter’s methods of obtaining revenge, Reiter brutally demonstrates what the idol can do, provoking Oliver into a desperate stand to keep the statue out of the mercenary’s hands and save his fellow slaves from its power. Season 4 has teased us with the possibility of Reiter having occult power like other characters that it has introduced and those suspicions are confirmed in this episode. Whether or not Oliver was able to stop that power from increasing remains to be seen.

“Broken Hearts” sees Arrow‘s return after a month-long hiatus. It was an episode that was definitely worth waiting for and quite an emotional ride. It feels like a corner has been turned with this episode, and that the heartbreak within Team Arrow is only just beginning. 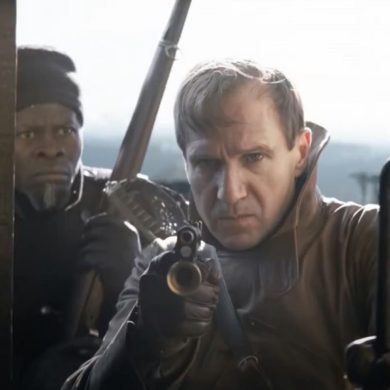 ‘The King’s Man’ Gets A New Trailer, New Poster & New Shadowy Central Villain, All In One Day