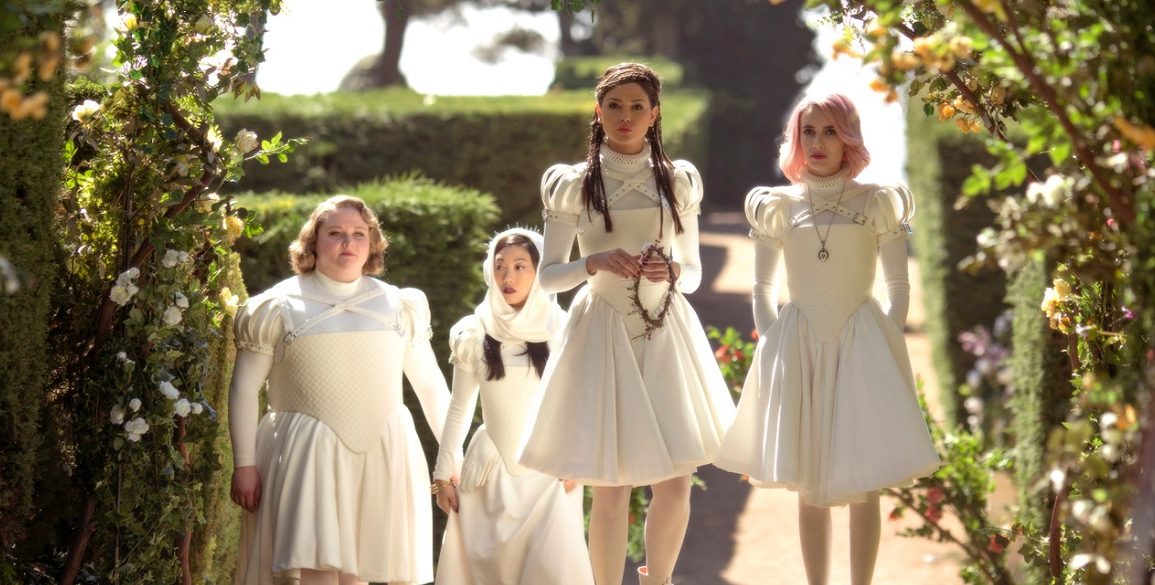 With everyone constantly upset by the barrage of remakes, reboots, it takes something special to grab the public’s opinion. Though we can’t remark of the full product itself, this trailer for Paradise Hills might just be that something. Trust us, you definitely need to drop everything and watch this. Right now!

That looks absolutely gorgeous! The colors, the set designs and the costumes are all brilliant. It’s vibrant and inviting, which of course means that it’s rotten at the core. The island, that is, not the movie. Even beyond the first initial glimpse, there’s a lot to like here. The cast is stellar (Awkwafina is having a fantastic half a year, so far). It’s by a first time female director (Alice Waddington), who’s working off a script co-written by Nacho Vigalondo (Colossal). Best yet? It was somehow shot for only $10 mil. Movies 10 times that can look dodgy, a lot of the time. Basically, Paradise Hills is firmly on our radar, now.

As visually stunning as the trailer is, it only hints at the twisty narrative. Here’s official synopsis, which lays things out a bit more clearly:

“On an isolated island, Uma (Emma Roberts) wakes up to find herself at Paradise Hills, a facility where high-class families send their daughters to become perfect versions of themselves. The facility is run by the mysterious Duchess (Milla Jovovich) where calibrated treatments including etiquette classes, vocal lessons, beauty treatments, gymnastics and restricted diets, revolve all physical and emotional shortcomings within two months. The outspoken Uma finds solace and friendship in other Paradise Hills residents — Chloe (Danielle McDonald), Yu (Awkwafina) and Mexican popstar Amarna (Eiza Gonzalez). Uma soon realizes that lurking behind all this beauty is a sinister secret. It’s a race against the clock as Uma and her friends try to escape Paradise Hills before it consumes them all.”

Execution is the name of the game with this one. If the story is done well, and the ending lands just right, expect people to be talking about this, for a while. If not, then I think it’s safe to assume it’ll still be celebrated from a visual standpoint. Early word from Sundance was that this one has the goods, though. We’ll be able to tell for ourselves, when Paradise Hills comes out in theaters and VOD on November 1, 2019.

REVIEW: Smooth Sailing for ‘Pirates of the Caribbean: Dead Men Tell No Tales’