THE GARAGE SALE is an interactive film where three stories unfold simultaneously at the same location: a joint garage sale with three couples, each with their own goals, and a host of garage sale denizens.  With twenty five actors and a three columned script, this ensemble comedy utilizes new technology to deliver a fun and fluid interactive experience.

The film follows the trajectories of our primary characters and the customers that come to shop their wares. The viewer is able to navigate between stories to get a different perspective, learn new information, and follow which of the couples they are most curious about. While their choices will not impact the final outcome of the film, the sequence in which they watch will impact how they feel about the characters.

The term “Interactive Film” is not a new concept, and as audiences have grown more sophisticated, filmmakers and artists have become more creative with unconventional means of telling stories. An early foray into interactivity in film was with the understandably ill-fated ODERAMA, a John Waters experiment for his 1981 film POLYESTER, where the audience had scratch-cards allowing them to smell the atmosphere of a scene. While perhaps not the experience that viewers were clamoring for, it was ultimately an attempt to give the audience an experience that went beyond passive entertainment.

In (more) popular culture, smash hit THE WALKING DEAD released a fully interactive story in 2012. Part video game, part animated graphic novel, it engaged audiences in decision-making during the story. Based on overwhelmingly positive reception, they have now released three ‘seasons’, and this trend has spawned development on similar interactive films for GUARDIANS OF THE GALAXY, BATMAN, GAME OF THRONES and PLANET OF THE APES.

The SUNDANCE FILM FESTIVAL instituted a new festival branch, the NEW FRONTIERS program, in 2014 to welcome in a new era of creative storytelling, inviting filmmakers and projects outside the conventional box to show their work.

The innovation continues with The Daniels’ (SWISS ARMY MAN) experiment in multiverse storytelling, POSSIBILIA, an argument told from a dozen different perspectives, which premiered at SUNDANCE and released on EKO STUDIO. Meanwhile, Steven Soderbergh has created a new six-story polyphonic project with HBO starring Sharon Stone called MOSAIC. Like THE GARAGE SALE, MOSAIC has a fixed ending, but allows the viewer to experience the story from many different perspectives. MOSAIC is set to air on HBO in January of 2018. 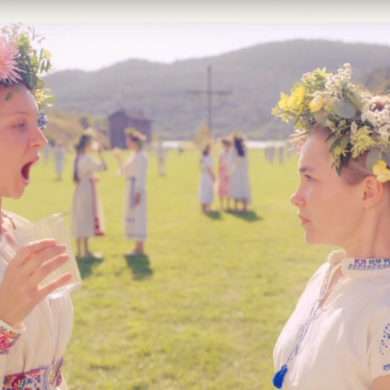