Kingsman Return to Save the World Again

In 2014, director Matthew Vaughn, with writing assistance from Jane Goodman, brought the comic book series The Secret Service to life in an entertaining big-screen adventure that became a surprise hit. Now, some three years later, Vaughn returns with the much anticipated sequel that reunites Eggsy (Taron Egerton), Merlin (Mark Strong) and, albeit briefly, Roxy (Sophie Cookson) as another mad villain threatens the world.

In the first film, part of the charm was to see the fish-out-of-water Eggsy enter the world of secret agents under the guidance of his mentor, Harry Hart (Colin Firth). However, that relationship took a dark turn when the evil Valentine (played in glorious over-the-top fashion by Samuel L. Jackson) killed Hart after a gruesome gunfight inside a Kentucky church. By the end of the movie, Eggsy had elevated himself, in part to honor his fallen friend. However, if you’ve seen the trailers for Kingsman: The Golden Circle, you won’t be surprised to know that Hart returns as yet another mad villain threatens civilization as we know it.

While our new story starts off in merry old England, it quickly shifts gears and takes place mostly in the United States. In the opening chase scene, Eggsy discovers that agent wannabe Charlie, thought killed in the first movie, is alive, well and seeking revenge, complete with a new cybernetic arm. Eggsy and Merlin are soon the sole survivors of an orchestrated attack by drug lord Poppy (Julianne Moore, The Hunger Games: Mockingjay-Part 2) and discover an American chapter called the Statesman. Forces unite in an effort to stop Poppy before she kills millions of people with the use of poison injected into various forms of illegal substances.

Kingsman: The Golden Circle succeeds on many levels to match the fun and craziness of the first movie. We are dealt some way over-the-top fight scenes, goofy villains and ridiculously named agents. However, some of the charm of the first movie is lost along the way with the move to America, due in part to some lackluster performances and perhaps one too many characters. I was anxious to see Jeff Bridges and his character of Champ, the American equivalent to Arthur, leader of the Kingsman (played briefly here by Harry Potter alumni Michael Gambon). Unfortunately, Bridges merely phones it in, never quite being given the opportunity to go crazy as we all know he can play. Channing Tatum has very little to do as agent Tequila while Halle Berry is entertaining as tech guru Ginger. However, we also have another American agent named Whiskey (Pedro Pascal) who ends up being the “did we really need him” character. I think agents Tequila and Whiskey could have easily been merged into one, which would have avoided an obvious clichéd twist and helped shave some time off the overly long running time of 2 hours and 20 minutes. 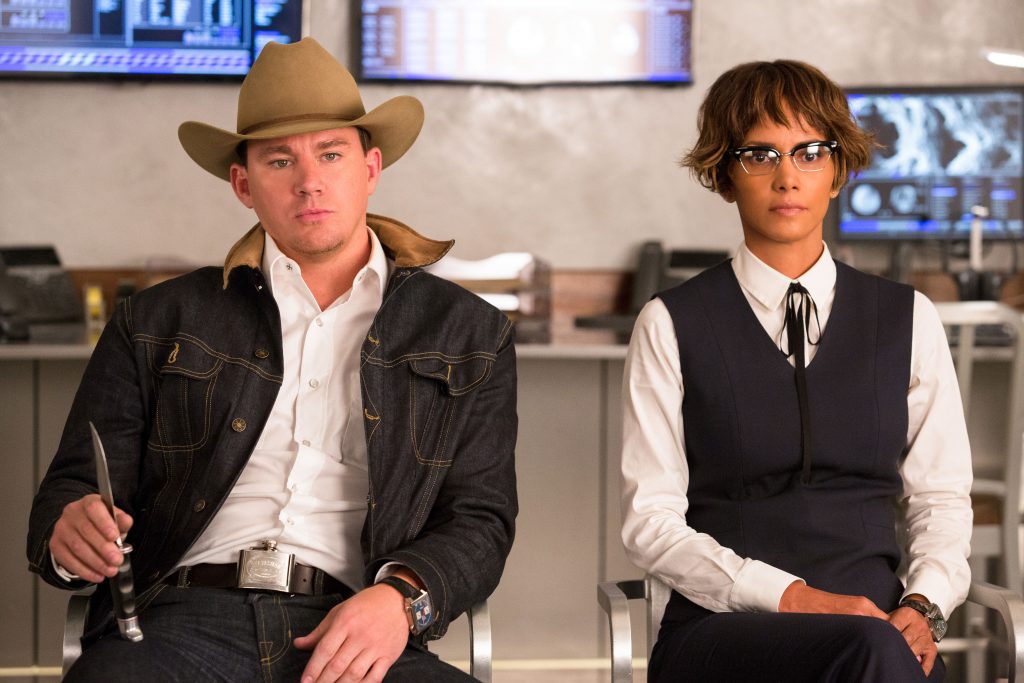 While it’s fun to see Colin Firth back, there could have been some tighter editing with his role as well. That could have helped accelerate the plot just a little bit, something that was definitely needed. Julianne Moore never quite reaches the manic level that Samuel L. Jackson did but she’s entertaining enough. And yes, we even have Elton John along for the ride in a performance that is uneven but, ultimately, quite funny at times.

Despite these few flaws, Kingsman: The Golden Circle is a fun sequel that continues the story from the first film without skipping a beat. It’s likely we’ll get a third film in this franchise and I look forward to seeing what else they can do. While this script is a little reminiscent of the first one, I think there are possibilities to do more with these characters without losing who they are in the process. For now, this is definitely a fun ride.