INTERVIEW: Everybody Wants Some!! 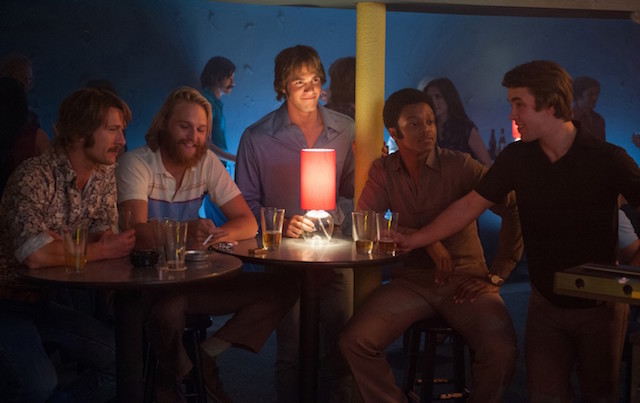 As you’ll read in my full review on Friday, I really enjoyed Richard Linklater’s new movie, Everybody Wants Some!! In an interview with three of its stars, I had the opportunity to ask about the era in which it takes place, specifically the year 1980. I called it “the 70’s,” which elicited a spedific reaction from Quinton Johnson, who plays Dale in the movie: “It’s interesting that you say the 70s because Rick (Linklater) says that 1980 is still technically the 70s. The 80s didn’t start until, like, 1983.”

Glen Powell (Finnegan) added, “It was a transition time… in clothing, politics, presidents. Everything was shifting and changing. Our relationship with the world was changing and I think this movie is about guys who are shifting from either college to the real world or from high school to college and figuring out who you are in the framework of that world and also in the world at large.”

Johnson continued, “And not living like you have to live your life for someone else. Nowadays where you have social media, smart phones and things like that. These parties and things if it were done today would be like everyone had their phones out showing other people how good a time you’re having. In that era it was like we’re having a good time with these people that are actually here.”

Before making the movie, the cast was encouraged to participate in the development of the characters. Johnson said, “We got an email from Rick before going out to his ranch to rehearse that pretty much said if you guys come in and read the script as-is, it’s not any good; you have to bring yourselves to it. He was such a collaborator and really allowed us a lot of leeway… but when we got to shooting, all that stuff was locked in from whatever we brought to the table in rehearsals.”

I asked if Wyatt Russell’s character, Willoughby, love for The Twilight Zone came from Linklater or one of the cast members. It was definitely in the script; Linklater wanted it there. Johnson explained, “He wanted that guy. He got such a kick out of that. He said there is a real guy that disappeared and they don’t know where he went, but he had all these Twilight Zones taped, he drank coffee, he read the Wall Street Journal.”

I then asked if any of these characters were based specifically on Linklater, or if they were just people he knew. Powell answered, “Rick said he’s in every single one of these characters in one way or another. If you’re really going to look at who he really was in this time period, it’s Blake’s (Jenner) character, Jake, coming into college.

“My character is not necessarily a real-life guy. When you talk about college after the fact, there’s a little bit of revisionist history that goes along with it. We sometimes look at the past with rose-colored glasses, and Rick said that’s who Finn is. He’s the guy that everybody thought they were in college, the idealized version of what you were and how you acted in that social sphere.”

The interview was a lot of fun and demonstrated a camaraderie that must have been present during production and does in fact appear onscreen in the movie. All three actors were energetic and entertaining, yet completely respectful of the other’s comments. Is one of them the next Matthew McConaughey, emerging from Everybody Wants Some!! a star like McConaughey did from Linklater’s spiritual predecessor, Dazed & Confused (1993)?

If so, it seems it would be Powell. Familiar to fans of TV’s Scream Queens as Chad Radwell, Powell already has an impressive resume and will next be seen with Henry Cavill and Nicholas Hoult in Sand Castle. Yet Russell, son of Kurt Russell and Goldie Hawn, seems to have the genes for stardom. And Johnson, entering the room rapping, is perhaps the freshest discovery. Whoever it is, if any of them, they all seem like they have level heads and are eager to promote the movie, not themselves.