ICYMI: Super Bowl Trailers Gives Us A lot to Look Forward To

The Super Bowl was this past Sunday and what a game it was. Super Bowl Sunday is also famous for something else though. High profile, expensive commercial spots! The art form that brought us Ridley Scott’s Mac Ad. The genre that made three beer drinking frogs famous. The 30 second films that showed us “Mean” Joe Greene wasn’t actually mean at all, he was just thirsty. As much as i’d love to do a 1200 word think piece on Amazon, Dodge and the rest; it’s probably best to just share the big trailers we got from the big game. Two of the trailers are missing as we’ve already talked about ‘Solo: A Star Wars Story’ and The other trailer for ‘The Cloverfield Paradox’ had came and went from our national conscience by 9:00 am monday morning (let’s hope the movie does as well). Here are the other 4 big trailers from Super Bowl LII

Avengers: Infinity War is scheduled to be released May 4, 2018. The film stars literally everyone. I think i’m even in a few scenes with Groot.

Overall a really fun year of Big Game trailers. All these movies and shows have me excited and ready for summer. What is your favorite trailer from the bunch? 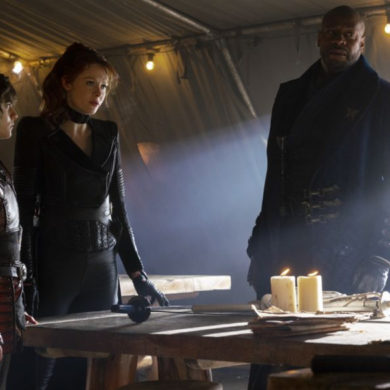 Media Rewind: AMC’s Into the Badlands Chapter XXXI “Requiem for the Fallen”